Call it any way you want, snow in Upstate New York not easy to handle 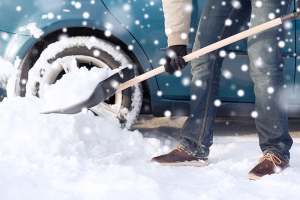 My understanding is that the Inuit people had 22 words for “snow.”

I have a few words for it myself, few of which we can print.

When I was a little boy, I loved snow. I loved riding my sled down big hills and throwing snowballs and building snow forts and making angels in the snow and getting out in the cold.

That lasted for years, right up to the moment my dad handed me a shovel and pointed to the sidewalk, which was buried under 10 inches of the white stuff.

When I was a paperboy and it snowed, you had to slog through it. You were up so early, very few people had a chance to get out and clear a sidewalk or steps, so my route always took a lot more time and created a lot more problems — I couldn’t run away from one dog, for instance, but he usually had more trouble than I did in the snow and we’d sort of end the excitement in a face-off draw.

My family lived in northeast Pennsylvania, so I knew what a snowstorm looked like.

We lived on the top of a hill in Clarks Summit, and every time we had a good snowstorm, my dad and I would go into the sunporch and watch cars trying — but not succeeding — in getting up our hill. The next morning I got to go outside and watch my dad have the same problem backing his Buick up our very steep driveway.

Then he’d get out of his car and say, “Get the shovel!”

Years later, as luck would have it, my dear wife decided we’d get married in December — her semester break between classes and student teaching, and my holiday break between semesters in the school where I taught. The night of our wedding, the weather forecasters were talking gloom, doom and feet of snow. We had a three-hour trip from the reception to our apartment, and I didn’t want to have that turn into a day-long trip (two years prior, I was hitch-hiking home to see her and got stranded when they closed the turnpike because of snow.) It was so cold that day that the skin on my banjo cracked.

So, we left the wedding reception early to avoid getting stuck in the snow.

Think I have ever heard the last of that?

We moved to Albany in the 1980s, but because our house in Pennsylvania sold so quickly, we had to wait four months for the house in Altamont (west of Albany) to be vacated. We were in an apartment with our first daughter for all that time and the first week we were there we learned all kinds of lessons about the difference between snow in Pennsylvania and snow in Upstate New York.

In that first week, we had a huge snowstorm — 27 inches. It took my wife and me most of the day to shovel  our driveway, which was maybe 40 feet long, and the 4-foot mound of snow that was at the end of it.

Then we found out, half-way through the afternoon, that the schools had all been open. We were sure they would be closed. We hadn’t even considered the possibility they might be open.

About a month later, my old sports editor from Pennsylvania called to see how I was doing.

“How’s the weather?” he asked.

“We’re getting a dusting,” I told him.

“It’s a dusting of four inches,” I said.

“We have been blessed with a similar dusting for the last 11 days straight.”

Then we moved to Wayne County.

Yes, I had heard about lake effect snow.

We had a Christmastime snowfall the first year we were in this area. I had no snow blower and a 100-foot driveway. I thought I’d go out and get a little bit ahead of the storm and clear the driveway.

An hour later, I came into the house. My wife was sitting in the kitchen as I entered, and her jaw dropped.

She could have just as reasonably asked, “Yeti?”

I was covered, head to toe, in snowblast from the wind and the heavy, wet snow. My beard was white and frozen into one piece. My face was white. My eyelashes were white. I had snow in my ears. I tried to speak to her and my face cracked from the ice that had formed.

My toes were numb. My fingers were numb. But standing in the house for just a moment, I realized how much I was sweating from all the work I’d done. I clearly remember being out there shoveling and unable to see across the street or the house next door.

When I took my jeans off, I could stand them up — they were still partially frozen.

I looked outside, where all the snow I had cleared from the driveway had been replaced. “This is nuts,” I said to myself.

That night, I asked my wife the important question.

“You have to get up early tomorrow.”

“To shovel the driveway so I can go to work.”

As I said, I have lots of words to describe snow.