‘We really must ask ourselves, what is so compelling about cellphones?’ 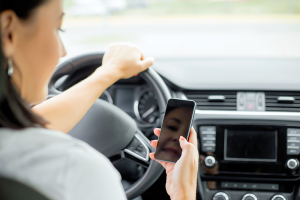 I recently had dinner with a friend at an upscale restaurant, and while we were enjoying a drink before dinner, I checked out the other clientele to convince myself that I was not underdressed for the location.

In a corner table, I noticed an older couple — he was busily scanning his cellphone, and she was doing the same.

During the course of our 90-minute long dinner, I occasionally glanced toward this couple only to find them in essentially the same activities as when I first spied them.

This provoked a conversation between my friend and me about the “rules of eating out.” I told him that I thought it was horrible that a couple would go out to eat and essentially ignore each other in favor of their phones.

“Can’t they get off those phones long enough to talk to each other?” I wondered.

My friend said that most of the time in situations like this both parties are staring at their phones rather than staring at each other. “It seems as if they cannot give up their phones even for the short time that they are having dinner,” he said.

The next day, as I thought more about this, I wanted to see whether any research has been done on this topic and, if so, what have been the conclusions.

I found that two researchers from British Columbia — Elizabeth Dunn and Ryan Dwyer — have been working on this, and they definitely noticed a trend.

Dwyer told Time magazine: “We were really curious. Is the amount of time they are spending on their phones having an impact on people’s social interactions and on how much they’re enjoying the time they’re spending with other people?”

They found that the answer is “yes,” but not in a good way. They found that phone use during a meal decreased the diner’s enjoyment of the event. If you can resist the lure of your device, Dunn said, you may actually enhance your experience.

One of the interesting findings of the research is that phone use could be contagious. “People are more likely to use their phones when others around them are also using their phones, so that suggests there may be this sort of domino effect,” Dunn said. “By putting your own phone away, you might be creating a positive domino effect.”

So why do we have this fascination with phones, especially when most of the messages we get can be classified as inconsequential or “junk?” Phone use can become habit-forming, Dwyer believes. “You’re used to pulling your phone out and looking for new notifications,” he said. “Have a rule that if you’re going to dinner with some friends or family members, you’ll put your phone on silent and leave it off the table. Try to stick to these rules so you can form new habits.”

Kicking a tech addiction is right up there with trying to quit smoking or cutting down on alcohol consumption or heading to the casino every week. When I told my friend the results of my research, he didn’t believe me. “Oh, come on,” he said, “it’s not that bad.”

I gave him these specifics:

• Almost half of respondents in a survey said they would experience a great deal of anxiety if they lost their phone and couldn’t replace it for a week.

• Seventy percent said they checked their smartphone within 30 minutes of getting out of bed in the morning.

• Fifty-six percent said they check their phone just before going to sleep.

• Nearly half check their phones constantly during the weekend, even when vowing that they will put away their phones from Friday afternoon until Monday morning, but they just can’t do it.

• More than half of the respondents said that they check their phones continuously while they are on vacation.

When you see people texting and driving, which they know is wrong and could be deadly, we really must ask ourselves what is so compelling about cellphones.

There are ongoing studies looking into whether smartphones really hook us into dependency and whether phone-makers have a hand in this mission. When you think about it, the lights, the sounds, the siren song of an important message or news story instantly transmitted, all of it has the allure which some can just not ignore, regardless of how hard they try and how they have resolved not to be hooked into “checking in.”

According to David Greenfield, a Connecticut psychologist, emails give us satisfaction, because we never know when we are going to get an exciting message. “So we keep checking our phones, over and over again,” Greenfield said. “It’s like a slot machine; we’re seeking that pleasurable hit.”

Well, now we have this anticipation and discovery not just once a day but, potentially, hundreds of times a day.