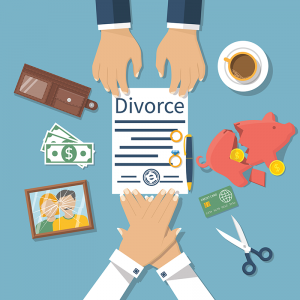 Divorce is tough enough. Dealing with retirement plans during and following a divorce adds an extra degree of complexity. If not managed correctly, missteps can cause a heap of trouble for both the divorcing couple and family members.

During the Divorce Process

For qualified employer retirement plans, the court can allocate a portion or all of a plan to the former spouse as part of the divorce settlement. This is done under what is called a Qualified Domestic Relations Order (QDRO).

Splitting or awarding individual IRAs during a divorce is handled in a similar fashion, although the QDRO approach is not applicable. Here the option is to transfer all or part of an IRA to a former spouse’s IRA provided that such a transfer is awarded under a divorce decree or legal separation agreement. Once the funds arrive in the former spouse’s IRA, all the normal rules apply. Distributions, when ultimately taken, are taxable to the former spouse and the 10 percent early-withdrawal penalty is in place, where applicable.

For either type of plan, it is critical to monitor “basis” — the after-tax portion of any transfer/rollover from an employer plan or traditional IRA. If basis is other than zero, there are a couple of watch-outs:

• Both the giving spouse and receiving spouse need to document basis in any affected IRAs by filing Form 8606 with their income tax returns in the year that a transfer/rollover takes place. The same is true when distributions are made in subsequent years. Form 8606 is the official IRS form for calculating the taxable portion of any distribution.

• When splitting assets in the divorce process, it is to both spouses’ benefit to understand which assets are pre-tax and which are after-tax. For example, trading a $200K traditional IRA with zero basis for a $200K residence is not an even exchange.

Once everything is transferred and the dust settles, all is not smooth sailing. We must now contend with beneficiary designations for both spouses. Retirement plans are among a number of non-probate assets that transfer on death to named beneficiaries. The will does not control the disposition of such assets.

Guess how many forget to change their designations and end up with a former spouse listed as primary beneficiary? What happens at death? What about children, or children from a previous marriage, who might be listed as contingent beneficiaries?

For IRAs (as well as life insurance and deferred annuities), state statues rule. Fortunately, in New York state, such beneficiary designations for former spouses are revoked. A former spouse is treated as being deceased. Contingent beneficiaries, if listed, are then next in line. If none are listed, the plans are payable to the estate.

For qualified employer plans, the rules are different. These plans are covered by federal statutes under ERISA. States cannot overrule federal statutes. Here the default is that whoever is listed as beneficiary is indeed the beneficiary, former spouse or not. An interesting twist is that employer plans can, in fact, supersede the federal default. Many, but not all, plans revoke beneficiary designations for former spouses. If divorced, check your plan for details. Better yet, update your designations.

Having and relying on a good attorney and financial planner to guide you through and beyond the divorce process is essential. Do not try to do any of this on your own.

James Terwilliger, CFP®, is a senior vice president and senior planning adviser with CNB Wealth Management, Canandaigua National Bank & Trust Company. He can be reached at 585-419-0670 ext. 50630 or by email at jterwilliger@cnbank.com.