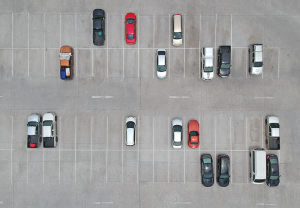 You know the conventional wisdom that says if you can put a name to something you’re concerned about or afraid of, that makes it easier to deal with.

So here’s the name: tingchechangphobia.

And here’s the problem: parking lots.

Yes, I have a problem with parking lots. I didn’t know it until very recently, but it’s been there for a long time, hiding in the back of my head somewhere.

Things became clear to me in October in two instances. First, I was in a Tops parking lot in Walworth. A very nice Tops and a very nice parking lot. I had my grandson in the back seat and we started backing out of a parking space.

My Mazda has side-view mirrors, a rear-view mirror, and a back-up camera. It also warns when an object approaches from behind. I had all that stuff going on for me as I backed up and suddenly, BANG! BANG!

I hit the brake and looked left and right — nothing. I looked behind the car and there stood an elderly couple and the man had had the presence of mind to bang on the back of my car with his hand before I ran over him and his wife and ruined their day and their groceries.

“What was that?” my grandson asked. The man banging on the back of the car with his bare hand had scared him. It had scared me, too.

“I almost ran over two people!” I told my grandson.

“Why did you do that, Granddad?”

All the technology, my normal care in looking in every direction, and I still came close to flattening two neighbors.

The second instance happened over two days in Virginia. I had taken a mini-vacation to explore Civil War battlefields and criss-crossed several towns around Fredericksburg. Whenever I got off a main road to visit a fast-food place (that part of the world is home to every franchise imaginable), I got stuck in a parking lot. I’d get to the place where the food was, and couldn’t find my way out, or I’d make a turn to where I thought the place was, only to find out I was in the parking lot of some other place. I spent 10 minutes trying to get out of Chick-Fil-A one afternoon and finally got so frustrated I went back in for another sandwich and to get directions on how to escape.

It was like a lyric from “Hotel California.” I could check out any time I wanted, I just couldn’t leave.

That brought back another parking lot memory. Three years after my wife and I were married, we decided to take a trip to Canada for our belated honeymoon. We were booked in a hotel in Longueuil, Montreal. We had called ahead to get precise directions. We drove to a spot where we were looking straight at the hotel.

But we were in the wrong parking lot. We spent the next half-hour going out onto highways and back into parking lots, trying to find the right one.

Finally, we got close enough so there was a space of lawn between us and our hotel and I drove across the grass to get there, taking my chances on being in a very nice Canadian slammer for the night after being charged with espionage trespass or something.

When we got to the front desk, I complained about the directions we’d been given and told the women behind the desk how we finally got to her hotel.

“Happens all the time,“ she said. “You Americans?”

Which brings me to Wegmans. I love our local Wegmans, but I realize you have to have 360-degree vision in the parking lot.  I’m from Pennsylvania and Connecticut, and it took me by surprise the first time I drove into a Wegmans: there is some kind of mystical benevolent force that governs parking and traffic there.

For instance, it’s completely normal for someone to get out of their car and walk straight into the store, crossing different parking lanes and the fire lane in front of the store without anyone making them a hood ornament. Cars ethereally stop and give ground. Most of those folks traipsing across the parking lot never look up from their phones to see how many cars have stopped to let them pass.

‘I’m from Pennsylvania and Connecticut, and it took me by surprise the first time I drove into a Wegmans: there is some kind of mystical benevolent force that governs parking and traffic there.’

You believe, I think, when you’re driving in a Wegmans parking lot, that every pedestrian is carrying improvised explosive devices in their pockets and if you even nudge them with your car, you will all dissolve in a blaze of glory — so you are extra careful not to get anywhere near anyone who is even thinking of being a pedestrian.

Some invisible ray emanating from the light standards makes everyone more polite, more patient, more careful and more forgiving in a Wegmans parking lot. It’s eerie. In Pennsylvania and Connecticut supermarket parking lots, nobody behaves like that. When you step out of your car, you’re on your own. In fact, you’re on your own when you’re in your car.

Maybe the parking lots here are different because everyone in northern New York state is so nice. Seriously.

The first time we drove around in the Albany area, where we used to live, a car sat a little too long at a stop sign in front of us and I did what any Pennsylvania drive would do: I beeped my horn and made a gesture demonstrating grievous peeve.

Four guys got out of the car in front of us almost immediately. I thought I was about to be relieved of a lot of snot, but the first guy stepped up to my window and asked, “Is everything OK? Do you need anything?”

When I said everything was just fine, he wished me a good day, got back into the car with his friends, and off they drove.

My wife looked at me, marveling.

“He must work at Wegmans,” she said.