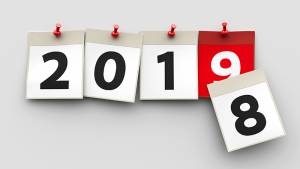 We have all heard the adage, “Change is the only constant.” Calendar/tax year 2019 is no exception.

Most of the numbers coming out of Washington that impact our tax and retirement planning lives are different this year, just as they tend to be every year.

It is common to see the numbers change by inflation using the Consumer Price Index (CPI) as the adjustment factor. Such changes are generally to our benefit. A difference this year, and into the future, is the use of the so-called “chained CPI” to adjust most tax-related numbers. Defined by the Bureau of Labor Statistics as an alternative CPI, it is based on the idea that in an inflationary environment, consumers will choose less-expensive substitutes. As such, chained CPI is generally lower than CPI. For 2019, it is about 2 percent.

While the difference is subtle, use of this factor over time will make annual tax-related adjustments less favorable for taxpayers.

Federal Tax Numbers. Seven tax brackets, ranging from 10 percent to 37 percent, were carried over from 2018 tax year. In 2019, the taxable income range within each of the seven brackets increased by about 2 percent. This is good. It results in a modestly lower tax bill for a given taxable income compared to 2018.

The standard deduction was increased from $12,000 to $12,200 for single taxpayers and from $24,000 to $24,400 for married filing jointly. Additional modest deductions are available for those who are blind or age 65 and older.

Social Security and Medicare. We’ve saved the best for last. Inflation adjustments for Social Security benefits are based on CPI (not chained). As a result, the 2018-to-2019 benefits increase is 2.8 percent — the highest since 2012. This follows a 2016 increase of 0 percent, a 2017 increase of 0.3 percent, and a 2018 increase of 2 percent. The ceiling on wages taxed for Social Security purposes increased from $128,400 to $132,900. While this 3.5 percent increase will not make current high-income workers happy, the good news is that it will pump additional funding into the system to help keep the program solvent longer.

The good Medicare news is that premium increases were very modest. Combined Part B and Part D monthly premium costs increased by $1.50 in IRMAA tiers 1 and 2, $1.30 in tier 3, $1.10 in tier 4, and 90 cents in tier 5. The bad news is that a sixth higher-cost tier was added for a modified AGI threshold of $500,000 single and $750,000 married filing joint. Again, this will not make high-income retirees happy but will help keep the program solvent at least for the near term. Be aware that Medicare premiums for 2019 are based on 2017 modified AGIs.

A word of caution: Don’t confuse these new 2019 numbers with current tax-preparation activities related to tax year 2018. They will come into play in 2020 when you prepare your 2019 income taxes. Also, with the significant changes in federal income tax provisions brought about by the recent legislation, you are encouraged to consult with a professional preparer and trusted financial planner.