When I was growing up in a small coal-mining community in Eastern Pennsylvania, I was fascinated with soap operas on radio.

For about seven years, until I was 12 years old, I would hurry home from school, throw myself on our living room couch with a snack in hand and listened to the lineup of soap operas from about 3:30 until 6 p.m.

Each ran about 15 minutes. Each had a distinctive theme song. Each had recognizable sponsors, most of them soap or laundry products. Along with Procter & Gamble, major sponsors were Colgate-Palmolive and Lever Brothers. As such, this is where the term “soap opera” was coined.

The marketing gurus at P&G seized on the concept that their company’s products would appeal to stay-at-home housewives.

Just as their TV counterparts would a generation later, the radio soaps hooked listeners with the serial-type format, so it was imperative to tune in the next day to find out what happened in kindly Ma Perkins home or whether Mary and Larry Noble on “Backstage Wife” would be able to weather the buffeting forces contributing to their marital issues.

Stories centered on wealth, glamour, infidelity and intrigue. By today’s standards, the radio soap opera would be considered sexist and classist, although analysts insist that a certain amount of sophistication was needed on the part of the audience to follow some of the intricate story lines and plots.

Frank and Ann Hummert are credited with coming up with the soap opera formula that would prove to be such an endearing part of Americana. The Hummerts created four of the blockbuster soaps — “Stella Dallas,” “Backstage Wife,” “Just Plain Bill” and “Ma Perkins.” (Talk about a work ethic: Virginia Payne played Ma Perkins in all 7,065 episodes over 27 years, never missing even one of them.) 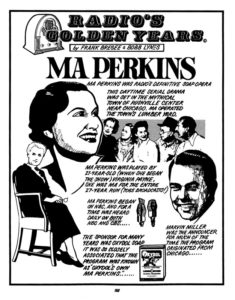 “Stella Dallas” is an excellent example of the genre. It ran for 28 years and starred Anne Elstner in the title role. The New York Times described the title character as “the beautiful daughter of an impoverished farmhand who had married above her station in life.”

The Hummerts based their radio adaptation on the 1923 novel “Stella Dallas” by Olive Higgins Prouty. It was one of the most popular films of 1937 featuring Barbara Stanwyck in the starring role.

The program’s prologue gave the premise of the drama: “We give you now Stella Dallas, a continuation on the air of the true-to-life story of mother love and sacrifice in which Stella Dallas saw her own beloved daughter, Laurel, marry into wealth and society and, realizing the differences in their tastes and worlds, went out of Laurel’s life.”

Other favorites to which I also listened avidly were “Pepper Young’s Family” “Lorenzo Jones” and his wife Belle, and and “Young Widder Brown.”

Some of the devices that became very popular are attributed to the Hummerts and Irna Phillips.

It was Phillips who introduced organ music to segue from one scene to the other. She also developed the cliff-hanger ending, which would compel audiences into returning the next day to find out what happened to their beloved characters.

Some say, however, that her true genius emerged when she devised a deliberately slow pacing of the action and dialogue so that busy housewives could continue to do their housework without missing crucial plot twists on the program.

For their part, the Hummerts created some of the story lines that are used until this very day: blackmail, amnesia, infidelity, class tension and reappearing long lost loves.

It is amusing to me that today we try to avoid ads on TV programs either by heading to the kitchen or recording programs and fast-forwarding through the commercials and network promos.

When I listened to the radio soaps, I would pay rapt attention and would often say or sing along with the jingles for Oxydol, Camay (“the soap of beautiful women”), Rinso (“Rinso white and Rinso bright”), Lava Soap (“L-A-V-A”), Pepsodent tooth paste (“You’ll wonder where the yellow went when you brush your teeth with Pepsodent”) and Ivory Soap (“99 and 44/100% pure; it floats)”.

Some of the theme songs were well-known to listeners and included “Funiculi-Funicula” on the “Lorenzo Jones” program, “Rose of Tralee” on Back Stage Wife, “Darling Nellie Gray” on “Just Plain Bill”, “Au Matin on Pepper” Young’s Family and “How Can I Leave” “Thee on Stella Dallas”.

The first commercial radio station — KDKA in Pittsburgh — went on the air in 1920. Clara, Lu and Em, the first soap opera, was presented on WGN in Chicago 10 years later.

Three friends originally presented the sketch on the campus of Northwestern University where they were students. Friends loved it so much that they persuaded the trio to try to get it aired on WGN.

The friends suggested to radio management that they would perform their routine free of charge. Interest grew so much that Colgate-Palmolive soon took over the sponsorship of the program after which it was moved to daytime.

With the growing popularity of television, interest in the radio soap operas waned in the late 1950s, and by 1960 most were either gone or had transitioned to TV. The best known soaps which made the move to TV were “The Guiding Light”, Y”oung Doctor Malone” and “The Brighter Day”.