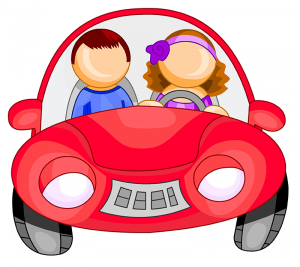 My oldest daughter, Amy, and I were having a discussion about learning how to drive.

In four years, Amy will be thinking about driver training for her oldest daughter.

My memory is still pretty vivid about what we did when Amy was old enough to drive.

She and I have different recollections of the same situation.

I learned how to drive in high school. Mr. Brunetti took us out in the school’s driver education car — a four-door Corvair with a push-button automatic transmission in the dashboard between the steering wheel and radio.

My dad was a little excitable, especially with me. He had much more patience with my two sisters. So, for me to go practice driving with my dad was really tense. He was an over-the-road furniture salesman for many years, and had well-developed driving habits from years of safe driving.

I just wanted to learn how to put my foot down on the pedal.

So when Dad and I went driving together, there was a lot of screaming and language usage that the Legion of Decency and Altar & Rosary Society wouldn’t have condoned. When we successfully pulled up to the house, my Dad would literally bound out of the car. I think he went straight into the house to have a highball.

When Amy was ready to drive, I was supremely confident of my ability to handle the instruction. I’d been a teacher for many years by then, a guidance counselor, and could be as calm as a lake at midnight if need be. Cataclysms didn’t faze me.

Certainly I could ease Amy’s passage into adult driverhood.

My philosophy in raising girls (we have three daughters) is that I wanted them to be confidently self-sufficient. I wanted to give them challenges growing up and as they conquered them, they’d be stronger women. So, when it was time to start Amy’s driving lessons, we were going to start with a standard transmission using a stick shift.

OK, OK. I know you’re reading that and saying to yourself, “This man has already taken leave of his common sense.”

But since Amy was the oldest, she got more challenges thrown her way, and blew them down. She was a smart, tough cookie. Still is.

My wife, Gayle, learned how to drive a stick first (her dad was a deliveryman), so I figured Amy had standard transmission gene markers. This should be a piece of cake.

The day arrived for the first lesson in a family car after some introductory stuff at school. My car was shined and ready to go.

Oh, my car: It was a Mitsubishi twin-turbo all-wheel drive coupe. I had learned how to put my foot down.

The car was a nice smallish size, very comfortable, and I figured Amy would be challenged a little bit going through the gears the first few miles, and then need some practice with hills and slowing down using the engine. But we had a beautiful bright summer’s day to ourselves and off we went. The car had some get-up-and-go, yes, but it also handled very well and stopped on a dime. It was a confidence-inspiring car.

We made a couple of spins around our small town, which didn’t have too many stop signs. That was good, because stop signs were a problem. We stalled lots of times.

She was thinking to herself, “I’m never going to get the hang of this.”

I was thinking, “I hope I still have a transmission at the end of the day.”

Finally, I figured we needed to go back to the house and talk through the Zen of shifting easily and effectively, by listening to what the engine is doing.

At the last stop sign before our street, on a little bit of an incline, Amy brought the car to a chugging, too-high-a-gear stop, and the car stalled once more.

She got it restarted immediately; she’d had lots of practice doing that.

“Then I laid some rubber,” she said recently, remembering the day.

My memory is different.

When she started the car again, she revved the engine way too high and instead of easing the clutch out, popped it off the floor. My fire engine-red Mitsubishi did not know what to do. The twin turbos were whining, and the clutch had just engaged all four wheels. The car didn’t want to peel out; it wanted to jump over a tree.

I’ve never been in a car that reacted the way the Mitsu did. It kind of shuddered and threw in the towel, deciding that it would like to take a break and go home.

Amy knew that Dad was not pleased, although he did not use language that his father might have.

I did get out of the car, told her to get out, and I started the Mitsu up. Thankfully there weren’t transmission parts laying all over the road, and we went around the corner to our house and parked the car behind the garage in the shade, so my little red Mitsubishi could gather itself and stop shivering.

Amy went into the house and either had a long talk with her mother about future driving lessons with me, or she went to her room to cry. I stayed outside with the Mitsubishi to make sure nothing fell off underneath.

Not too long after that – with lessons at school and with Mom — Amy got her driver’s license. But she couldn’t drive the first car we bought her: It had a stick shift in it.

Funny thing, my other daughters didn’t want me to give them driving lessons when they got to be 16.