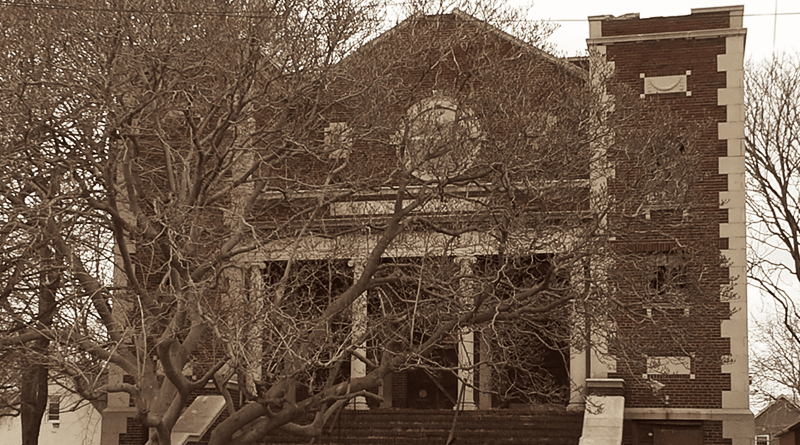 He found a formidable challenge, however, when he discovered the empty derelict B’nai Israel synagogue building at 692 Joseph Ave. in Rochester while on a walk as part of a community charrette with area business leaders and residents in the spring of 2013.

Scheier wondered if there was any way the elegant historic two-story Georgian Revival building could be reborn in the 21st century.

When the area was a vibrant community corridor inhabited by Eastern European Jews in the early part of the 20th century, there were 16 such synagogues.

Today, only B’Nai remains as a vestige of the unique architecture of the era but its future is bright once again thanks to Scheier and the help of many partners, including grant writers, community organizations, architects, attorneys and government representatives.

With a myriad of tax credits, grants and a spot on the National Registrar of Historic Places, the old synagogue’s renovation is set to begin by the end of the year.

Its new use is to serve as a 300-seat performing arts center, which is what area residents and the Joseph Avenue Business Association wanted, according to Scheier.

Architects at The Community Development Center helped develop that vision with B’nai Israel as the centerpiece. Artwork and banners throughout the quadrant let people know it’s about a new cultural climate not just one building.

“The people have to say that this is what they want,” Scheier says. “As an individual I can’t clean up this whole quadrant but government can sure help.”

Although B’Nai Israel has been out of use for decades, city administrators were reluctant to “do something negative with a house of worship,” says Scheier.

Scheier helped form the Joseph Avenue Arts and Culture Alliance in 2014 and worked with the city on putting together a deal to gain ownership of the building and dispose of some of the taxes that went unpaid for some 30 years.

“We’ve done it the right way. We got the right people on board to guide us,” Scheier says.

The 66 year-old Fairport resident retired from his longtime practice in Clifton Springs early in 2017 only to continue practicing internal medicine in the University of Rochester Medical Center network.

Scheier teaches internal medicine to first year medical students at the URMC, too. Still, he’s glad to have a more manageable schedule that doesn’t include the 90-hour work weeks he had as a sole practitioner.

Scheier grew up in a small home without air conditioning in Queens and moved to Rochester after doing his residency here. He likes that the area gives kids including the six he had, a little bit more room to run around and explore.

Putting together the pieces of a building or neighborhood revitalization project may seem like an immense challenge but it’s one that makes him happier than the myriad challenges a practicing physician faces in the American medical system today.

The amount of money that goes in into the American medical system today boggles the mind of a man who got a Ph.D. in economics before going to medical school at the New York Medical School at a time when starting medical school after 30 was practically unheard of.

“I remember when hospitals couldn’t make money. Now the amount of money that goes into it is phenomenal,” he says.

Scheier believes developing a relationship with a patient and getting to know their mental or psychological status is important to provide adequate treatment. But that’s not easy to do in medicine today, he says.

There’s no place to note a patient’s grief, happiness or emotional state. “It should be part of the details. To you and your doctor, that’s very important but it’s gone today,” he says while lamenting the “lack of art in medicine.”

His concern over the lack of uniform access to medical records is one shared by many doctors and AARP today.

“Patients’ records are a mess. They’re not uniform or compatible or available to other organizations,” he says. “If you go to urgent care in Syracuse, they don’t have it. They don’t know your history.”

B’nai Israel isn’t the first building repurposing project he’s been involved in, but it is the biggest and fulfills a desire in his heart to bring the arts he loves so much to a downtrodden community that can benefit greatly from it.

It’s what an extremely poor quadrant in a poor city like Rochester needs. “This has been done elsewhere before. It’s not something new,” he says.

His projects keep getting bigger. Scheier already owns the building housing the Black Box Theater down the street from B’nai Israel.

In 2012, he bought a former high school in Phelps and turned it into a senior living complex called Vienna Gardens.

The Joseph Avenue Arts and Cultural Alliance mission with Scheier as president isn’t just to restore B’Nai Israel but to offer a myriad of music, art and culture to the entire Rochester area.

“Our imprint is well beyond Joseph Avenue, it’s all over the city and beyond,” Scheier says.

A big benefit to the immediate area, Scheier says is that exposure to the arts improves school attendance, performance and graduation. The renovation may have a price tag but the cost of making people be and feel better through the arts is priceless.

“This is fun, this is enjoyable, he says. “I get to see a lot of happy faces in a poverty-laden area.”