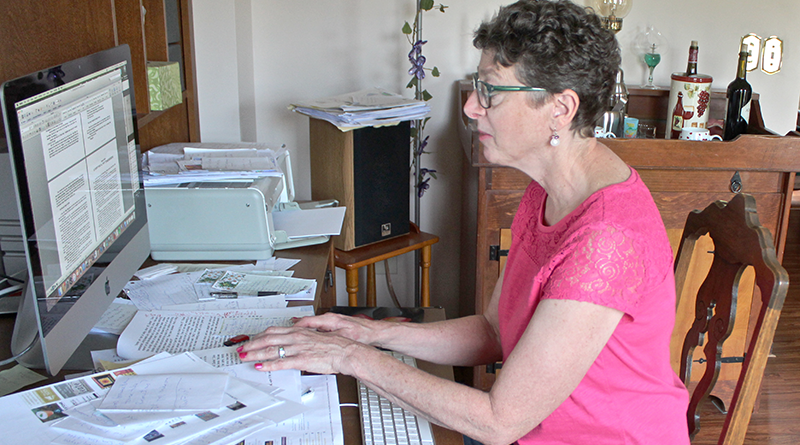 Everyone who has lived in this area for a certain amount of time has a reference to one of those grin-and-bear-it whiteouts — the memorable lake-effect monsters that Mother Natures uses to teach us all humility.

Diane Rivoli has a little different view of one such a snowstorm, one that changed her life.

Four years ago, she was battling to get to her job as office manager at North Creek Woodworks downtown.

“It was a Rochester snowstorm, and we’re going five miles an hour. I’m sitting behind the same car for a long time. It took me 20 minutes to get to work normally. It probably took me an hour and a half to get to work that day.

“So, I’m sitting behind this car and it has ‘ARZ’ on the license plate. So, the word Arizona pops into my head. Being me, I’m singing all the time. When I’m driving, I’m singing. I start singing a song, using the word ‘Arizona’ to the theme from the old Gilligan’s Island TV show. I’m going on and on and on.

“Then I’m thinking, I can grab letters off other license plates, and the words, they popped into my head. And I thought, ‘I can make more sentences, and hey, I could write a short story.’

“It became an obsession. Every time I went anywhere and I saw a license plate in a parking lot or a driveway, anywhere, I’m thinking of the words that the license plate made. And I made a big list — 106 words.”

“Then I wrote a short story,” she said. “I liked it so much that I couldn’t stop.”

After 18 months, Rivoli, 62, of Greece, became two things — retired and a published author.

She had turned her living room into a writing office, complete with a nearby karaoke machine for added inspiration.

The short stories and poems triggered by her license plate adventures became a book, “License.” She had it published, and along the way learned a lot of lessons about what it’s like to become an author.

But after six months of trying to sell the book to an agent who would present it to a publisher, Rivoli was nowhere.

“I probably sent out 100 query letters,” she said, the exasperation still vivid. “What you have to do first is get an agent. I was hoping for an agent. Then you have to hope for the agent to get to a publisher. I didn’t get anywhere with that. Nobody snatched me up.”

An unpublished book sitting in a box is like a baby waiting to be born. Sometimes you have to induce labor.

“I decided to self-publish,” Rivoli said.

She didn’t go to a “vanity” publishing house, but found an Amazon affiliate, CreateSpace. “I liked the way their website was laid out. When I sent a question, I got an answer right away. The pricing was good. I just liked everything about them,” Rivoli said.

She could get her book printed, with Joshua’s cover, for about $5 (including shipping) and she could order as many — or few — as she wanted. Her first order was for just 20 books. Since then, she’s had about 200 printed.

Birth of a novel

Now the baby was born. Time to send out the announcements.

Rivoli discovered that marketing a book was difficult and time-consuming. She had been a shy person for most of her life — except when singing karaoke — and now she had to sell her book and herself.

“Marketing was hard, and I tried so hard,” she said. Rivoli did radio shows (including Brother Wease). “I did book signings and readings at multiple places. I was a featured reader at the Genesee Reading Series sponsored by Writers and Books on University Avenue downtown. I made a presentation for the town of Greece at “Time Out for Women.” I’m going to do another one in January. GreeceNewsNY.com printed my book, chapter by chapter.”

She also sent about 40 copies of her book to reviewers.

“It was so disappointing — 95 percent don’t contact you, don’t even acknowledge they received your copy.”

Now that she has one book under her belt, will she try to go the route using a traditional publisher for her next novel, which is about a third finished.

“I was at a book fair at Barnes & Noble and some other authors were there. Some had used trade publishers, some were self-published,” Rivoli said, “One woman had written a book about her deaf dog. She had a traditional publisher and I asked her about it.

“She said, ‘I wish hadn’t done it through a trade publisher. I wish I had self-published.’ She didn’t like what they did, and she still was promoting the book herself. ‘My book is doing very well,’ she told me, ‘but if I had self-published, I would have made more money, and I’m still the one doing most of the marketing.’”

That made me say to myself, ‘Well look at that! Why do I want to use a traditional publisher?’”

Rivoli’s second novel is going slowly, although she printed her book of poetry right after “License.”

“I write every day,” she says, and her muse is restless. “I have the computer in the living room. Sometimes I get up in the middle of the night and stand at the kitchen counter and write ideas on a piece of paper,” she said. “I have a little notepad in the caddyin my car, and I pull over and write notes. Some days I’ll get up first thing in the morning and start to write. Other days, I’ll do the laundry or garden and then start writing.”

She thinks the writing is bringing something out of her, something she wants to share. “’License’ is a very emotional book,” she says. “It’s going to make you laugh, make you cry, make you think. I’ve gotten lots of good reviews. I’m very proud of it. I have become a different person. Perhaps it was simply that I have become bold enough to let the person I had always been out, ready finally to seize the glory of my day.”

Now she wants people to notice; to see what she sees through the words that started life on license plates.

“You have to have hope,” she said. “You can’t lose those high hopes or you won’t try at all. Any break can be the break for me. You never know.”