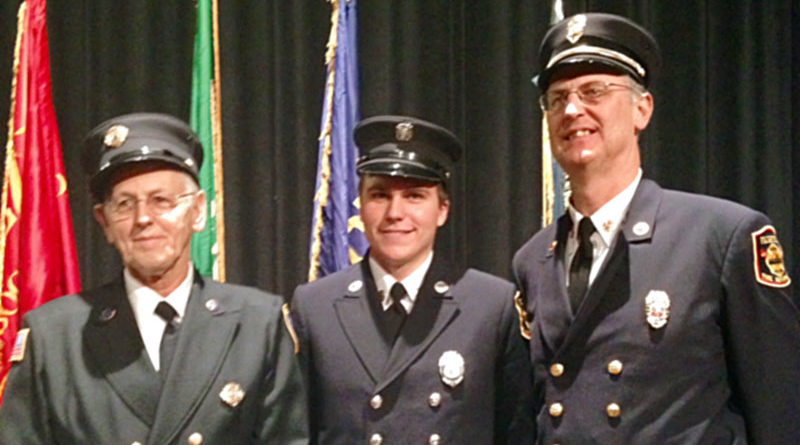 A lot of little boys want to grow up to be a fireman. John Welker did.

He has been the fire chief at West Walworth, Walworth and Fairport fire departments and remains a volunteer firefighter after leaving those positions.

His dad has been involved as a volunteer for 64 years. At age 84, Darwin Welker shows no sign of leaving. Welker said he was drawn into firefighting due to his dad’s example.

In fact, most of his family has volunteered for years. He met his wife Betsey when she was a volunteer firefighter. “I have enjoyed helping people since the day I joined the fire department 42 years ago,” he said.

Welker says that you always remember the feeling of helplessness when you arrive on the scene to find someone pinned under a car or being the first one on the scene of other deadly accidents. But these times are outnumbered by the times when “it all works,” he said.

“There are the good stories of successfully helping with CPR and seeing the patient a few days later or just being part of an elementary school presentation for fire safety week. Probably the best moment was watching my son D.J. graduate from the New York State Fire Academy and him receiving one of two awards that were given out that day and having photos taken with him and my dad,” he said.

“It’s always exciting to see the young members get started in a fire fighting career especially when you have known them for most of their lives. The friendships I have made through volunteering have been close to being family and sometimes in certain situations, are closer than family,” he added.

Another important part of Welker’s volunteerism is coaching at the Fairport Crew Club, which he described as a great joy. He began rowing eight years ago when his son and oldest daughter became interested in the sport.

“I try my best to stay in shape and when done correctly, rowing works approximately 80% of the body’s major muscles,” he said.

His enthusiasm for the sport and the kids is palpable. “First, working with the boy’s team and now as head coach of the varsity girls is so much fun. Watching the girls work hard and be successful is very rewarding,” he said. “Just last year, I developed a great relationship with the captain of the Fordham crew team that I worked closely with and her family. She keeps in contact and will help me with workouts.

“I truly enjoy coaching the girls and watching them grow as athletes and as young adults. Last fall, the girls raced in the famous Head of the Charles Regatta, the world’s largest two-day regatta, in a boat that was previously dedicated to me. It was a very proud moment for all involved.”

He regularly runs into parents of former rowers and talks about how they are doing. “There are so many kids that have gone on to college and remain friends. That gives me great pleasure,” said Welker..”

Last year at Christmas, he received a painting done by a former rower.

One girl made him promise that when she was ready to get married that he would need to be there and be part of the ceremony. He took a class to be ordained should he be needed to fulfill that role.

Over the last five years, Welker completed over 4 million meters on the erg, or rowing machine. He has helped set three corporate records for time and distance on the erg, all with groups of people over age 50 and many over 55.

He has rowed competitively for Fairport Crew and also the Rochester Boat Club, earning a silver medal in his first race. This busy man also has a paying job for the village of Fairport.

“Sometimes it’s hard to do everything but I try to stay involved with my kids: D.J., a career firefighter at Fishers Fire Department; Bailey, who attends Alfred University; and Sierra, who attends St. John Fisher College. I also help on my dad’s family farm as much as possible which is something I really enjoy,”said Welker. “When people and activities are important to you, you always find the time.”