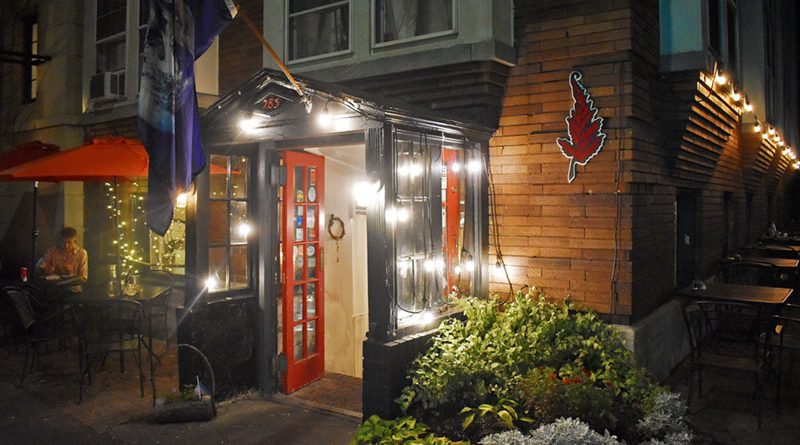 Are all vegan options guilty or guilt-free?

There were many factors that played into choosing The Red Fern, located at 283 Oxford St. in Rochester. One of which was simply the name of the restaurant and a piece of notable literature from my childhood. Being vegan, although we did eat our share of fruits and vegetables, wasn’t on our omnivore agenda.

After a jam-packed weekend that didn’t involve eating healthy, finding something clean was the way to go. The Red Fern’s mission and menu stood out. Also appealing was it sitting on the corner of Oxford and Park — it’s located in a pretty, hip neighborhood in Rochester.

For the size of the brick-walled restaurant, there is a fair amount of outdoor seating along the sidewalk. The Red Fern is as quaint as it is clean — very much so. While checking in at the station, it’s hard to not ogle the fresh sweet treats sitting in the case.

When opening the menu, a card read this weekend — Sept. 21 and 22 — was their sixth anniversary. We’re glad to support on a celebratory weekend.

For starters, the first menu item caught my attention. When doesn’t mac ‘n’ cheese or nachos sound appetizing? Put them together and there has to be food chemistry. The mac ‘n’ cheese nachos “snack” ($10.50) was more than that. The bowl was filled with tortilla chips (tortilla rounds found at your favorite grocer), cashew macaroni and cheese, and roasted tomatoes. I asked for the green olive salsa on the side due to my cold relationship with olives.

The option was really delicious, and the olive salsa verde was not heavy on the olive flavoring. The vegan cashew mac ‘n’ cheese was really delightful and there was no distinguishable flavor that made me think the cheese wasn’t the real deal.

We also opted for the second snack — the fruit and cheese platter ($10.50). A mound of cashew-macadamia cheese had flecks of sun-dried tomatoes on top. Green apple slices and grilled focaccia bread accompanied. The fruit was indeed fresh and the focaccia was delightful.

The cheese is open for discussion. Being a nutty cheese, it was very mild in flavor. Almost no flavor, actually. The sun-dried tomatoes didn’t help the situation. However, it’s very soft and easily spreadable. With the bread or the apple, the light flavor of the cheese paired very well.

For large plates, the Buddha bowl ($13.75) and lentil loaf ($13.75) captured our attention. The lentil loaf is a veggie loaf take on meatloaf. It comes with a scoop of mashed potatoes, sautéed kale and herb gravy. No loaf is ever complete without gravy. The kale was sautéed very well and the red skin mashed potatoes were very soft and flavorful.

The herb gravy was also very applaudable and proof you don’t need meat for a delicious gravy. The lentil loaf had the same consistency as a meatloaf, but it’s much grittier thanks to the lentils. It’s not that this was bad, because it wasn’t, but the ground lentils might not be for everyone.

This entree, which came in an actual (not edible) bowl, was stellar. The well-marinated tofu was a standout. The consistency wasn’t rubbery and cut through like chicken. The coconut brown rice, which acted as the bed for the other ingredients, was not overly flavored.

The vegetables, the beets and the pickled pair, were noteworthy. The tamari sauce also packed a flavorful punch with prominent garlic. When you combine all the ingredients in one bite, the flavor is as vibrant as a Monet painting.

As an apres-dinner treat, I opted for the peanut butter rice Krispie treat ($4.50). The large portion of the dessert was nothing to laugh at. It was topped with a solid blend of chocolate and peanut butter. The flavor made me as giddy as a child.

Before tip, the total came to $57.24. For a respectable amount of food, which allowed us to take home leftovers, it was of great value. The quality of the food was high, and each option lived up to expectations.

The Red Fern is a definite recommendation, especially for those stubborn omnivores who say they couldn’t enjoy a vegan-friendly meal. This place will prove your doubts wrong.

Photo: Façade of The Red Fern, a vegan-friendly restaurant located at 283 Oxford St. in Rochester.