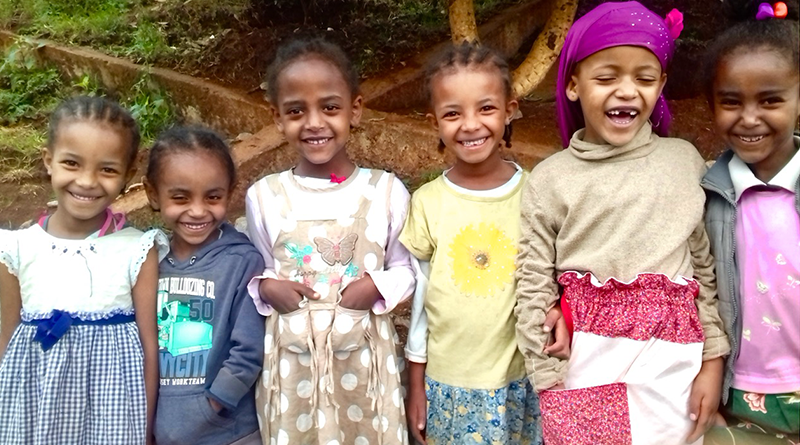 Savvy Sew-ers have Third World children on their mind

Gaya Shakes was concentrating on getting the hair just right.

Behind her, a boom box was gently filling her work area with the Flamingos, straight out of 1959, playing, “I Only Have Eyes for You.”

The doll she was working on was small, with lots of curly hair. It would end up sitting in the pocket of a dress someone else was working on, and be accompanied by some underwear another woman was sewing — all for the little girl who would receive everything and gush because she felt so special.

In the room, the chatter was constant. Happy. Encouraging. Affirming. There were gentle suggestions and congratulations when something new was working. Just the kind of talk you’d expect in a roomful of retired teachers and school counselors.

When finished, that doll, that dress, and many like them will see the world: Cambodia, Tanzania, Jamaica, Puerto Rico, Zambia, South Africa, Kenya, Ecuador, Grenada, Ethiopia, Mali, Peru, Brazil, Thailand — and they all start in this room.

“We are a group of 20 women who are firmly dedicated to improving the lives of girls in Third World countries,” said Cathy Fager, one of the Savvy Sew-er principals who helped start the project more than five years ago.

She is a retired elementary special education teacher.

The Sew-ers are based on the “Dress a Girl Around the World” movement, which puts dresses in the hands of little girls so they look special, cared for, and belong to somebody.

Fager said the dresses are bundled and taken as checked luggage by ministers, missionaries, even people on trips, and delivered to girls all over the world.

“The dress, and the doll with it, make little girls feel special,” said Sandra Martinez, a retired middle and high school counselor. “There’s a lot of joy in this. If I were in a little girl’s shoes out there, I’d want someone thinking about me.”

Martinez explained that dresses are shipped out between 50 and 100 at a time, and more than 800 have reached little girls. Older girls will get a dress, some underwear and a journal. Older girls may also get handmade sanitary napkins, because when they menstruate, without such a simple personal article, they don’t go to school and fall behind.

“Everybody in here is very dedicated,” she said.

Throughout the room, women are holding up whatever they’re working on, making sure it’s right, and feeling the satisfaction they have in doing something good for kids.

The more experienced sewers help those who haven’t stepped up to a machine since their children were small — 20 years or more. Not everyone needs to sew — some cut fabric, make bindings, match fabrics and work on yarn dolls.

“I do this because I love it — because of the context of where the dresses go. I love the people here,” she said.

“I enjoy sewing with a purpose,” said Roz Cohn, a retired French and Spanish teacher. “We’re doing something for someone else and that makes me feel good. It gets my creative juices flowing. It’s very rewarding.”

Martinez said the Sew-ers have spawned similar programs in the YMCAs in Penfield and Gates.

“This is a hoot,” said retired counselor Barbara Chambers, who was busy working at a sewing machine.

“I love it,” said Martinez. “It’s very rewarding for me. Everyone in here gives so much.”

Shakes finished getting the hair just right on the doll she was working on. “This is just something for the girls to have,” she said, holding up the doll. “It says, ‘Here’s something special just for you.’” She quickly mentions that the dolls don’t go with dresses destined for Haiti because of the religious connections to such objects.

Getting the dresses to their destinations requires a network of people who have contacts with churches or orphanages in many countries.

Georganna Greelee, a retired counselor, was lucky enough to deliver dresses herself on a Road Scholar program program to Costa Rica, where the group leader took her through the backwoods to an orphanage.

On the side of Martinez’s worktable is a special book, filled with letters and photos from little girls who got the dresses. Whenever letters or pictures arrive, it’s a special moment for all of these women, closing a circle of love to children they do not know, but treasure so much.

Want to Help the Savvy Sew-ers?

The Savvy Sew-ers can be contacted through Cathy Fager, one of the Savvy Sew-er principals, at Cathy.Fager@gmail.com. The group is thankful for donations of cotton fabric, flat cotton sheets, fleece in neutral colors, elastic, safety pins, straight pins, new or gently used T-shirts sized 4-14 (they form the top half of T-shirt dresses) and trimmings. They can be dropped off at the RTA office — 300 N. Union St., suite 301, Rochester — on the fourth Friday of the month.