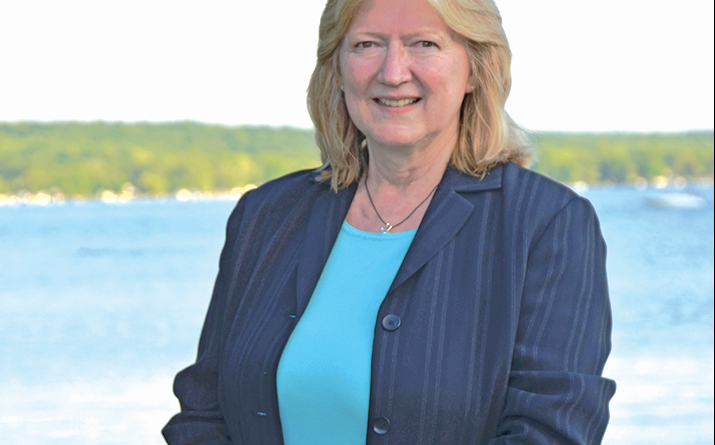 As a former high school teacher in the Adirondacks, Bonnie Ross enjoyed what she always called the ‘aha’ moments. It’s the time when she sees a student finally get a concept or turn the corner in academic life.

“There is nothing like seeing a young person advance and watch them make the steps to having a better future,” said Ross, 63, of Canandaigua. “It is what I truly love doing and something I didn’t want to stop doing.”

Ross was honored recently by state Senator Rich Funke as the Woman of Distinction for the 55th senate district for a career in teaching and also working as a healthcare executive.

“Bonnie is representative of the very best that our community has to offer,” said Funke. “Following her successful career she could have retired, but instead she chose to give back and our community is now better for her service.  She focuses on positive changes affecting all of Ontario County and is a true leader in our community.”

It was an unexpected accolade.

“I was absolutely thrilled, overwhelmed and deeply humbled,” said Ross, who holds a master’s degree in healthcare administration and in her 30-year career has served as an administrator in California, Texas, Kansas City and New York state. “Each year, they recognize women in their district that they think have done good work, and it really is an honor to be recognized while doing something I love.”

Two years ago after a short stint in private consulting, Ross was named the executive director for the Partnership of Ontario County. The independent nonprofit organization runs community programs for child advocacy, juvenile justice, mental health and various youth-related initiatives, serving the area since 1998. Its mission is to create, support and administer alliances to cultivate positive social change.

“In a way, this is the best retirement job that I could have,” said Ross. “This gives me an opportunity to be some place that has passion and vision. We are here on the frontline of the community helping young people deal with challenging situations and helping them grow in many wonderful ways.”

The organization also understands that something needs to be in place to support those whose family members succumbed to grief. The organization uses a grief program titled Journey Through Loss.

“Sometimes the fight is still going on to help rescue a family member and sometimes the fight has ended for one reason or another. There has to be a support group for people dealing with this loss because it can be incredibly difficult,” added Ross.

Bonnie Ross has always believed early intervention programs remain key to stemming the tide of negative behavior. Data from her organization supports that theory. In a study of 2,000 people aged 12 to 25, 3 percent reported using heroin in the last 30 days of the report. The average age for a youth using non-prescribed pain killers for the first time was 11 years old.

Under Ross’ leadership, the partnership launched added six new programs while growing the organization’s reach by over 86 percent within two years.

“Bonnie has supplied positive energy and enthusiasm to the partnership team,” said Philip C. Povero, Ontario County sheriff and chairman of the board for the Partnership of Ontario County.

“As executive director, Bonnie works tirelessly supporting alliances which cultivate positive social change. The collaborations Bonnie has helped form focus on enhancing the quality of life for all residents of Ontario County.”

In the past year alone, she has helped the organization open family support centers in Canandaigua, Phelps-Clifton Springs and Geneva. The partnership has also installed three medication drop boxes in Canandaigua, Geneva and Victor, and conducted 10 heroin forums to students and the community reaching more 2,500 people.

“I heard a story from one of our bus drivers who said the next few days after the forum, students were talking about the program and wondering why would someone throw their lives away by taking drugs. They were really inspired and they created a public service announcement on their own because they wanted positive change for their fellow students,” said Ross.

Donna Besler-Tatum, who is the executive director at CARENet, said Ross has shown unbelievable dedication to an important program called Nowhere to Go, an initiative that helps the homeless.

“When it became apparent that we were seeing more pregnant clients that were either homeless or going to be homeless, it was time to meet and address this issue,” said Besler-Tatum. “When we realized how many other citizens in the community wanted to get involved in helping with the homeless issue, we met with Bonnie and it was wonderful. Her enthusiasm and dedication when she worked with the group had me in awe.”

Besler-Tatum remains impressed with Ross’ dedication and passion that she sees month after month.

“Bonnie continues to help our clients by helping to secure donated items that are needed when our clients find housing,” she said. “She continues to donate to our largest fundraiser, our Chocolate Gala, where we hold a silent auction and raffle. This allows for us to keep our doors open and all of our services free.”

Kathryn Bluett, nurse practice manager and co-founder of Nowhere to Go, has seen the tenacity and love for others that her colleagues brings everyday. The organization, which was one of the six new programs Ross added, is a community forum that discusses how people might care for men, women and children in immediate crisis situations with nowhere to turn. She has worked with Ross for several years trying to bring a low- cost health center to the Canandaigua area, which has manifested itself in Jordan Health Center, a comprehensive personalized family organization for all individuals regardless of the ability to pay.

“Bonnie is a consummate professional who strives to understand the mission and vision behind the task before she begins to develop a plan for direction,” said Bluett. “Since the start of Nowhere to Go campaign, we have been able to educate the community on homelessness, collaborate with various nonprofit agencies  and that is something we would have never be able to do if not for Bonnie.”

Ross credits her success for having the proper work-life balance. She makes sure not to let life take her away from the many aspects worth enjoying.

A native of Vermont, Ross and her husband, Gary, operated a bed and breakfast in Canandaigua for the past 13 years. The Victorian Bed & Breakfast located in the Finger Lakes Region of Central New York, offered guests a quiet and solitude escape. “It was a wonderful experience that we had but we sold it,” she said. During her spare time, she enjoys researching her family genealogy and has found and connected with cousins all over the country.