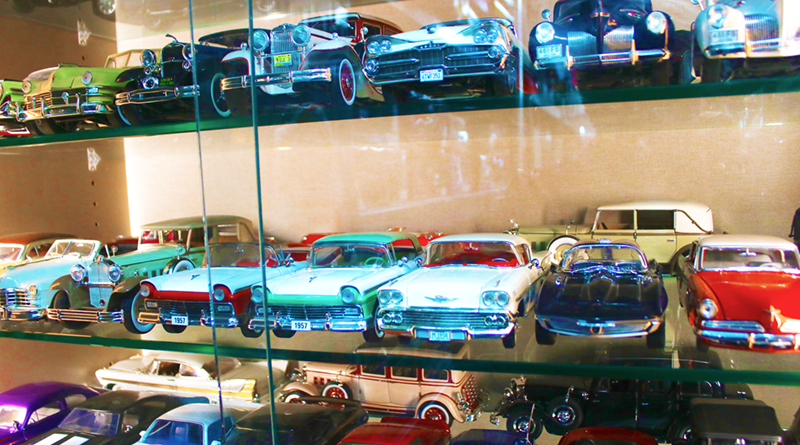 The store is remarkably quiet, except for the murmurs of customers who have found a memory.

You hold it in your hand. And in nanoseconds, stories about your youth — or last summer — suffuse within you, taking you to another place.

In your mind, the memory is vapor. Vivid, but vapor. But you’re holding something in your hand now, something bright and shiny and rich.

It’s detailed. Real rubber. The steering works. The engine is in detailed splendor. A car you dreamed about is in your hands. A car you drove is here to share with friends. A car that you and your wife made out in — right there in that tiny back seat — is a memory you can take home and put on a shelf.

Auto Antiques, a very special store at routes 21 and 31 in Palmyra, has thousands of die-cast cars just like the one in your hand. And books and sales literature about the car. And drag race versions of it. NASCAR models, too. Special TV cars and trucks and motorcycles and ambulances.

Mark Theobald, 60, is the owner, curator and collector who softly greets clients. He has years of experience as a car wholesaler, is a nationally known expert on coachbuilders (the companies that made special bodies for high-end cars), has created successful websites that compared crash-test data for car buyers, and has accumulated a museum’s worth of stuff for Auto Antiques, his third store.

For gearheads, a visit to the store is to be reacquainted with your youth, with everything from $2 Hot Wheels up to $600 rare drag racing cars (Grumpy’s Toys, for instance). Theobald is in constant touch with the market, selling below eBay prices, with an inventory you don’t have to wait for the Postal Service to deliver — you walk out of the store with it.

Collecting model cars is a male preoccupation, mostly, and sometimes it’s not easy.

“Guys may have a collection, but it’s not on display in their house,” he said. “They may have a cool man cave where their wife lets them keep the stuff that she doesn’t want to see. One thing I noticed, just coming into the store — a guy will coerce his wife into driving up to the store. They will sit in the car and argue for a few minutes. Sometimes the guy will come into the store and sometimes they will leave. Many wives are averse to it because it’s money that could be spent on them, as simple as that, or on something she wants.”

That’s half the problem. The other part is sadder.

“Very few people collecting anything today are under the age of 50,” he said. “Ten years from now, if I’m alive, you might see this store still open. I may make a little money. If I weren’t as well off as I am, I could not do it. Friends of mine who are antiques dealers have the exact same problems I do.

“The stuff will go away when we die. Very few people come into the store under the age of 40. There are teenagers who come in here, who have been exposed through video games. Most of them are just content to play the video games, but there are a couple of kids who come in here who are thrilled to be in here. When we were kids, you were either into sports, cars or music. I was into cars and music.”

Theobald and his wife, Sarah, a psychiatrist, were living in Vermont when he opened his first store, Motor Library, offering only books, yet it was successful. A second store, in Holland Patent, near Utica, sold fewer books but a lot of die-cast cars, with a huge NASCAR selection.

Now, in the Palmyra store, Auto Antiques has books for sale, thousands of them. But he’s still waiting for the market to return — most of them are half-price.

“I love automotive books,” he said. “I’m an automotive historian. I need books to do my research. I started off as a rare automotive book dealer 25 year ago. Books were popular then. I would buy three or four copies of a popular title because I would sell them. Virtually every book in the store is half-priced because I last marked them 10 years ago. And they’re still not moving and I probably have 5,000 books in the store. That’s kind of sad.”

Want a book about Ferraris? He has 80. And 60 Porsche books. 70 Mercedes books. And lots of Ford and Chevrolet and, well, you name it.

The store answers a lot of, “Do you have?” questions.

Looking for a dealership sales piece on a particular car? Ask Mark.

Old issues of Hot Rod magazine, say from the 1960s? Mark has them, and a lot of other popular publications from inception to demise. “They’re really cheap,” he said.

Magazine ads for cars? He’ll sell you the whole magazine. “It breaks my heart to tear up an old magazine to get the ads out,” he said.

The selection of die-cast cars extends in racks from the floor to the ceiling. Walk in the door and turn left and in a few steps you’re looking at the “A’s” — Audi, Alfa Romeo and AMC. At the opposite end of the store are the ‘Z’s” — Zimmers, for instance. Most of the cars in the store are from $20 to $60, and in many cases, he has different years and colors available. Theobald will school you on the quality models and point out the details of each.

He has Franklin Mint and Danbury Mint-issued cars in special cases and more are in storage. “The market for them is dwindling,” he said. “Most of them were $100 – $125 when they were new. With some exceptions, they’re $40 now, but they are beautiful cars. Nobody is ever going to make cars this detailed again.”

Theobald also stocks a few airplanes and boats and even has material on electric trains, but quickly adds, “That’s another dead subject. Railroad fans are dropping like flies. I also have tons of inventory of Mack trucks and snow plows, but people don’t care about them anymore. That’s the story of my store…I have lots of stuff for old men.”

What he stocks in the store has changed a little with the new location in Palmyra, where he’s still in his first year of operation. He now has DVDs, race clothing, piles of photos and posters.

On this day, two men came in. One was in his 60s, the other in his 30s. Father and son. A few minutes in one of the aisles and Theobald heard a familiar conversation begin.

“Look at this,” the younger man said. “Do you remember this car?” And the men started a talk, jogged by a memory.

There’s so much more to a model car than holding it in your hand.