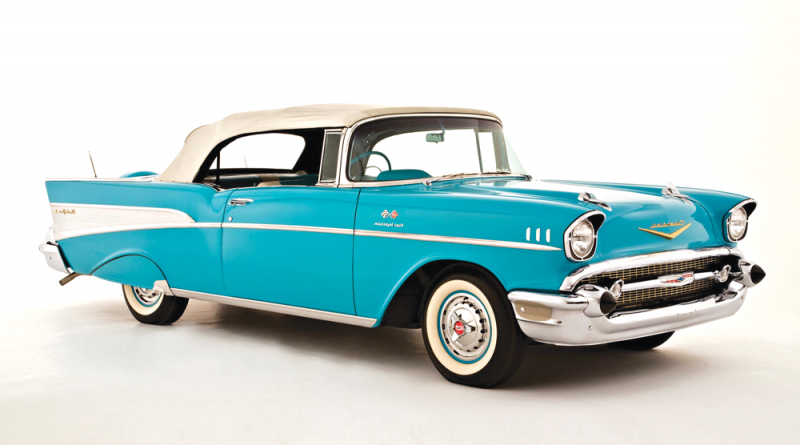 America brimmed with confidence in the 1950s, embodied in spirit by the beginnings of the Space Race with the Soviet Union.

Many cars of the era were styled to reflect supersonic aircraft. Distinctive models designed by Harley Earl and others remain favorites to many Americans of a certain age.

Gas remained cheap, and there were plenty of roads to cruise along in beefed-up cars with powerful V-8 engines.

What was your first car?

Cars in the 1950s became lower, longer and wider. Many were designed by forward-thinking stylists like Harley Earl who were heavily influenced by the transport industry, and incorporated ideas from both trains and aircraft.

• The 1957 Chevrolet: The Bel Air and other models, with their distinctive tailfins and dual bullet tail lights, remain popular among collectors. The car’s image has been frequently used in toys, graphics, music, movies and television.

• The 1959 Cadillac is remembered for its huge sharp tailfins with dual bullet tail lights and jewel-like grille patterns and matching deck lid beauty panels. Elvis Presley’s pink Cadillac became almost as much of a cultural icon as the singer himself.

• Corvette: Although many could argue the Chevrolet Corvette sports car may have really come into its own in the 1960s, it began life in the 1950s and included several classic models.

• The Ford Thunderbird began life in response to the Corvette. The 1955 T-bird had single, circular headlamps and tail lamps and modest tailfins. The first two-seat Thunderbirds were sleeker and more athletic in shape than later models, which became four-seaters and emphasized the car’s comfort and convenience features rather than its inherent sportiness.

• The Studebaker Silver Hawk was produced between 1957 and 1959 by the Studebaker Corp. of South Bend, Ind. Its low, rakish lines and stylish design caught the eye of a particular group of car enthusiasts.

• Nash Metropolitan: The tiny import is still a favorite at auto shows, and was among the first “economy” cars sold by an American manufacturer. In 1954, the American Motors Corp. was formed from the merger of Nash-Kelvinator and the Hudson Motor Car Co. After the merger, Ramblers were marketed as both Nashes and Hudsons, with no visible difference between the two. The Nash and Hudson makes were continued through 1957, after which all of AMC’s offerings were marketed as Ramblers. The sole exception was the imported 1958-1962 Metropolitan.

• Among American auto manufacturers, Chrysler Corp. cars — like the lost and lamented DeSoto — may have best personified the excess of 1950s car styling best. The late 1950s models all featured oversized tailfins and a wealth of chrome, along with other styling features that helped Chrysler products to personify the era.

Along with DeSoto, the 1950s spelled the end of many well-known automobile makes like Hudson, Nash and Packard. Others, like the unusually styled Ford Edsel, never caught on with the public.

The 1960s gave birth to a whole new breed of cars and driver preferences that catered to a generation just coming of age.

In the 1960s, many 1950s-styled cars remained popular until mid-decade. Cars still featured lavish chrome and flamboyant taillights. In the mid-1960s car companies began to manufacture high-performance cars, which ultimately replaced the extravagance of the 1950s styles.

Cars that remain classics include the Ford Mustang, Chevrolet Camaro and Nova, Dodge Challenger, AMC Javelin and Chevrolet Corvette, along with the distinctive VW Beetle.

In the late 1960s, strange-looking compact imports with names like Datsun and Toyota began appearing on American roads, foreshadowing the future in ways few people realized.

Baby boomers these days, especially those with some disposable income, have a yen for some of the more exotic cars on the market, according to www.Forbes.com. Boomers were born between 1946 and 1964.

Topping the Forbes list is the Porsche Boxter convertible. Porsche sells more than 84 percent of its Boxster sports cars to baby boomers.

Next is the BMW Series 6 convertible, a speedy V8-powered car. Nearly 80 percent of all Series 6 cars are purchased by empty nesters.

Also popular is the Mercedes-Benz SL two-seat roadster. About 70 percent on Mercedes’ SL roadster are sold to baby boomers.

Another popular option for boomers is the Land Rover LR2 sport utility vehicle. More than 67 percent of LR2 SUVs are boomers.

Listed fifth in popularity by Forbes is the Mitsubishi Eclipse Sypder sports car.

Other vehicles popular among baby boomers are the Audi A5/S5 Cabriolet, the Volvo C70, the Mercedes-Benz M-Class Hybrid and Corvette.

Another car on the list, the Chevrolet Aveo, is clearly popular among those boomers on a fixed income. The subcompact is not known for its power and racy lines. More than 65 percent of all Aveos are purchased by those in the baby boomer age bracket.