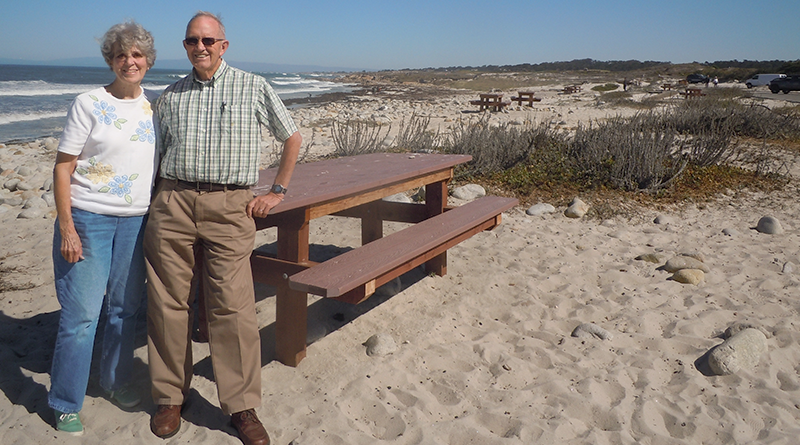 Joe and Maree Klingensmith define what ministry is all about

You could say that biology brought them together.

They met as graduate students at the University of Michigan in the fall of 1958 at a party sponsored by Intervarsity Christian Fellowship. She was a farm girl from Oregon; he had grown up on the Ponca Reservation in Oklahoma and in Wisconsin where his father was a pastor.

The following spring, Joe Klingensmith had earned his doctorate in botany and Maree McGauhey her Master of Arts degree in biology.

They were married on Aug. 29, 1959, and moved to Ohio where Joe had landed a job teaching biology at Ohio Wesleyan University.

In 1960, he became an assistant professor of biology at Colgate University in Hamilton.

Tragically, the couple’s first-born son Wesley was stricken with spinal meningitis at 13 months; the child survived but lost his hearing.

When Wes turned 3, Joe learned of an opening in the biology department at the Rochester Institute of Technology and applied so Wes would be able to attend Rochester’s highly regarded School for the Deaf rather than a boarding school.

Maree worked part-time as their boys Wes and Pete were growing up — teaching biology at Wheatland-Chili and at the Eastman School of Music as an adjunct professor.

Over the years, she and Joe restored their historic home in Scottsville.

Maree researched local history and period decorating. She enjoyed reading, created scrapbooks to record her family’s past and carried on traditional homemaking arts such as cooking and canning that she had learned as a girl in Oregon.

In the fall of 1987, Joe took advantage of an opportunity to teach botany in China for a semester through a joint program between RIT and Zhejiang University in Hangzhou. Maree tagged along and ended up tutoring young faculty members in English.

Friendships with Chinese professors visiting RIT subsequently led to an invitation to teach English at Shanghai University through the Sydney Institute of Language and Commerce. Between September 1994 and December 1998, Joe and Maree traveled to Shanghai three times to teach at the SILC.

Joe had retired from full-time teaching by that time. He was 62 and Maree was 58. They enjoyed traveling and various hobbies and were active in their community, and they were about to embark on an adventure that would have a worldwide impact.

It began at their small church in Henrietta with a Lenten program that challenged participants to find ways to serve their local community. The couple’s initial efforts were inspired by their experiences in China; by Linda Gamlen, founder of International Student Network, an outreach to international students enrolled at area colleges; and by Literacy Volunteers of Rochester (LVR), with whom they’d trained.

In collaboration with these organizations and with the support of Ridgeland Community Church (RCC), Joe and Maree sponsored an English as a Second Language tutor-training program that concluded with a five-week practice session.

Encouraged by the positive response, the couple and other volunteers continued to offer weekly tutoring sessions at the church.

Groups were divided according to fluency and need. There were many Chinese and Taiwanese students from the University of Rochester and RIT in those early years. Soon students were bringing their visiting, non-English speaking parents with them on Thursday nights.

Chinese and Vietnamese immigrants from two local factories learned about the group and began attending. Although they had continued to partner with LVR, Maree and Joe soon realized that they needed to diverge from LVR programs in order to meet their participants’ changing needs.

Groups with advanced English speakers discussed American culture, customs and current events, prompted by a variety of articles. Weekly meetings included refreshments and time for mixed interaction.  For some, it afforded their only opportunity to socialize with Americans.

All about the people

“My most precious [memory] of ESL class is related with friends that I met there. We are from all of different countries but the racial barrier does not bother us,” recalled Oug Soon Suh, who is Korean. “Joe and Maree know that it is very challenging for other ethnicities to speak in English at the class so they organized several activities. Once we get close to each other, it becomes great joy and excitement that we share our understanding and thought with one language.”

There were winter fun days and fall harvest parties at Mendon Ponds Park, as well as Thanksgiving dinners, Christmas programs and Easter presentations.

For several years, a joint Fourth of July celebration with Linda Gamlen and the International Student Network (ISN) was held at Klingensmith’s home, located adjacent to Gravel Ponds Recreation Park.

The annual picnic drew 70 to 100 internationals who played lawn games, swam at the park and enjoyed its spectacular firework display.

ISN’s Mom’s ‘n’ Tots program began as an opportunity for non-working international ladies to get out of the house, meet American women and share fun activities during the day.

For the past 20 years, Joe Klingensmith and his wife Maree McGauhey of Scottsville have befriended international students from 25 different nations. They have celebrated weddings and the arrival of children, attended local naturalization ceremonies and welcomed them for visits to Rochester.

Eventually it was renamed Ladies Exchange, in order to be more inclusive. The popular group continues to meet twice a month at RCC for cooking demonstrations, crafting projects and an annual Christmas “Greens Party.”

Klingensmith purchased a 15-passenger van in 1999 in order to provide transportation to weekly classes and special events from the campuses and apartment complexes where students, visiting scholars and immigrants lived.

“One of my greatest joys,” said Maree, “was driving the route each week, having that personal contact with the participants and their families. It was great fun and important in building relationships with so many.”

In 2000, a Bible study was initiated at the request of ESL participants. Interest has remained steady and Joe and Maree continue to meet with individuals on Sundays after church services.

Sheena Li met Klingensmith at RCC in 2007 while completing her residency in oral surgery at U of R. Since 2015, she has been living in a remote part of Papua New Guinea, serving through Samaritan’s Purse in medical ministry, community development and empowerment. She is also pursuing a doctorate in ministry at Tyndale Seminary.

Li, who participated in CCM and has remained very close to Klingensmith, explained why they have had such an impact.

“There is something distinctly attractive about their friendliness and hospitality that draws people to them. They are genuine in getting to know newcomers or international students, caring for their practical needs and sharing their lives with them without pretense or ulterior motives,” she said. “They were joyful and loving whenever they talked with students from a different country or culture and made them feel at home in America. They were gentle and patient with everyone; even in their human moments of weakness and tiredness, they would always put the needs of others above their own.”

For the past 20 years, Klingensmith have befriended internationals from 25 different nations. They have celebrated weddings and the arrival of children, attended local naturalization ceremonies, and welcomed former participants back for visits to Rochester.

They are quick to credit their what they call “dedicated, giving, faithful, all-volunteer tutoring staff and cross-cultural ministry team,” but the consensus is, the program would not have thrived for so long without their leadership and example.

When asked what have been some of the most rewarding aspects of their outreach, Joe responded: “Observing growth and positive changes in the lives of individuals and their families; celebrating their accomplishments as they reach their unique goals; experiencing the world, peoples, and cultures without leaving home; and finding purpose and meaning in our own lives by making a difference in someone else’s.”

Bhavik Gandhi was an RIT computer science major in 2007 when Maree invited him to attend ESL classes on Thursday nights. He moved to California after graduating and today works for Apple, but he still has fond memories of his years in Rochester and considers it home, mainly because of his experiences with the people he met through the program.

“I am grateful for the teaching about American culture; it really opened me up to feel more comfortable with people. Joe and Maree and the different tutors I met expanded my thought processes and helped me to become less introverted,” he noted.

Gandhi has visited the couple several times since moving away, most recently at Thanksgiving.

Klingensmith are both in their 80s now. Their eyesight has diminished and their steps slowed a bit, but they are still going strong, welcoming and embracing new international friends, and demonstrating by their quiet service how to live lives of purpose and meaning that can truly impact the world.