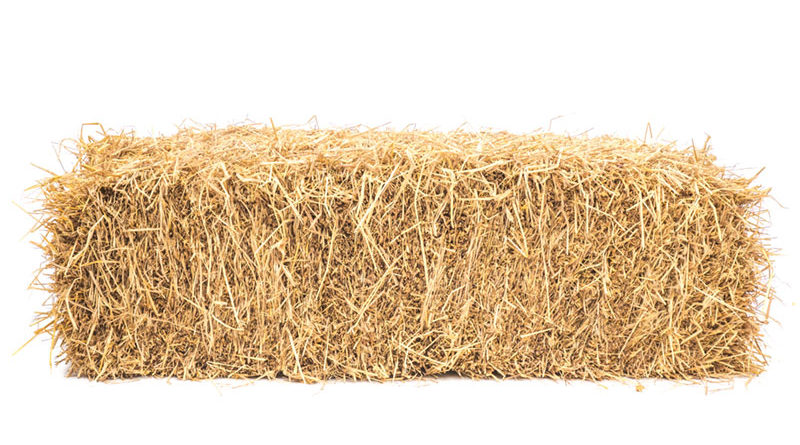 Kathleen Draper has a plan.

She’s going to build her forever home on a couple of acres of the family farmstead in the town of Gorham in Ontario County.

In the process, she’s going to clench her teeth and fight global warming. Instead of allowing carbon to escape from her house, she’s going to capture it — sequester it — before it can ever get started on its way into the atmosphere.

One of the prime building materials she’ll use is straw bales, following a movement that is present in Europe and Canada and is gathering speed here.

She’ll get the straw from the farm after harvest. It’ll be dried to the proper moisture content, put in bales and placed in the walls of her house, which will be about 18 inches thick.

Her home will have an insulation rating exceeding R-50. It will be built to what is known as the “Passive House Standards” — so tightly constructed that less energy will be needed to heat it.

She’ll use solar power and believes the home will incorporate air-source heat pump technology to keep things comfy inside.

The thick walls will lend themselves to window seats and special design elements throughout. And the house will last at least 100 years.

Draper, 56, is a consultant and chairwoman of the board of the International Biochar Initiative, an organization that is pushing to have more industries use biochar — waste material that has been burned in very little oxygen. Biochar locks in — sequesters — carbon. Farmers can use it in the soil. The construction industry is looking at its use in building materials — it can add insulation qualities to cement and provide heat resistance to asphalt.

She has co-written a book, “Burn: Using Fire to Cool the Earth,” that offers ideas about taking carbon out of the atmosphere and thus reducing global warming. Draper has her Master of Business Administration degree in managing for sustainability from McGill University in Montreal. She worked internationally for Cap Gemini for 23 years until the firm started outsourcing jobs like hers to India.

After grad school, “I went whole-hog into biochar. I’d done my thesis on biochar, reading extensively on what we could do to bend the corner of the carbon cycle. Biochar was technology I could understand because I was raised on a farm. I decided to see if I could make it work into a career.”

As much as she understood about how biochar could help farmers in organic farming methods and keeping carbon locked in the soil rather than the air, she knew if it could expand to use in other areas, she really could make a difference.

She didn’t have to look far for help. Albert Bates was a member of the board of the International Biochar Initiative and a former environmental lawyer who is now a lecturer and author living at The Farm, an eco-community in Tennessee.

“I told him, ‘Hey, I think we ought to write a book about non-agricultural uses for biochar.’”

In her house, Draper wants to use biochar in the insulation for the plumbing and septic systems; she wants to mix it with the material on her driveway to make the surface a little more porous.

A straw bale house can be very easy to assemble without a lot of special skills or tools — and it’s normally done with a team of workers — once the posts and joists are up. A “pre-fab” process can be used to lay the bales down on plaster (which may contain biochar), then plaster the bales on top, let things dry, and erect a whole wall at a time. Or, the bales can be laid down in rows like bricks, tied and wired together.

They’re cheap and they’re close at hand for Draper — just two miles away on the farm.

Using straw bales prevents them from being burned or decaying, thus saving carbon from entering the air.

They are biodegradable. If a home needs to be torn down because of age or other reason, the straw bales can be plowed back into the earth.

Straw bales are actually somewhat fire retardant. Because they’re dense, they tend to smolder instead of bursting into flame.

The first steps of building her new home will happen soon: she needs the foundation and framework completed before she’s ready to use all those straw bales. That will happen this spring or early summer.

And using straw bales requires a certain set of new skills that aren’t readily available in the area. Draper said there’s a straw bale house in Seneca Falls, and another in the Rochester suburbs, but she’s asked for help from the Endeavour Centre in Petersborough, Ontario to help her find an instructor/construction manager who can lead the process.

“I haven’t started advertising too much for workers,” she said. “I’m waiting for the instructor. I’ve had a lot of family and friends who said they’d help. There’s a rhythm to the construction once you get started.”

She should know. Draper recently attended a week-long straw bale house-raising (1,500 square feet) outside of Ann Arbor, Michigan, part of a 40-person team. She said an instructor may favor a 12-person team to build her house, rather than a crowd. Her single-floor house will have 1,750 square feet of space.

Once the house is built sometime this fall, it should come in at less than $200,000. “It should be cheaper than a normal house,” she said. “And my ongoing costs should be much reduced. There will be no fossil fuel heating costs and if I do it right with the current solar power incentives, my costs could be close to zero. As I age, I want to have predictable low costs, and this is one way to achieve that.”

There is so much cutting-edge equipment and ideas going into this house, Draper knows she has a busy year ahead of her. “The challenge is going to be finding people who can install these types of things,” she said.

But when it’s done…it will be something.