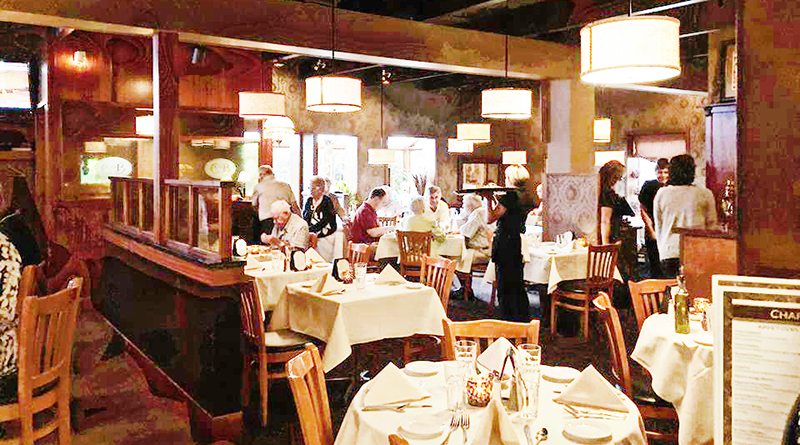 In 1967, the Penfield establishment Charley Brown’s, located at 1675 Penfield Road, opened as a family-style, comfort food establishment. That’s according to what the restaurant boasts. The stout, rustic looking restaurant could be easily missed while driving by, save the tall sign with the red neon lights. Clearly this could be an original staple. Considering the glowing sign and Italian and American fare, all this information could foreshadow the experience beyond the door.

The dimly lit restaurant first presents the bar. It has a classic appeal with hanging lights and a wooden-bodied, glossy-topped bar. In the immediate right corner, which would prove itself later at the end of the meal, is a perfect place for a small band. A keyboardist and saxophonist provided a tasteful dinnertime soundtrack.

The dining area has three distinct sections: the well-lit back corner with a skylight, which was where we were placed, the main dining area with hanging ceiling lamps and a room with floor-to-ceiling windows. The glass-cased seating exterior has surrounding shrubbery, which allows it to resemble the conservatory of a Clue board game.

With all this considered, the tables dressed in upscale fashion to the nines, and a very clean bathroom with a reusable hand towel dispenser, Charley Brown’s Mafioso-esque atmosphere is pretty killer.

Reservations aren’t required, according to the gent I spoke to on the phone earlier in the day, but evenings could be busy. Charley was pretty packed around our arrival at 6 p.m., so the reservations worked in our favor.

The demographic that evening was mostly adults, middle-aged and older, but there were a couple younger patrons as well. The attire is casual, but it isn’t a T-shirt kind of place (aside from someone wearing a dry fit athletic shirt and mesh shorts). Shorts and jeans aren’t frowned upon, but I wouldn’t suggest cargos or denim with holes.

Our server, Susan, was cordial and attentive through the night. She and her busser made sure our dishes of food made it to the table, our water glasses filled, and our minds and bellies content with what we were eating.

The three of us started off with sharing the eggplant parmigiana ($11.50). The breaded veggie cutlets weren’t blanketed with unnecessary breading, which allowed the crust of the appetizer to be crispy. The cutlets were coated with mozzarella and red sauce. It was enough of an appetizer for three people, as it wasn’t overly filling. The eggplant dish proved a great first impression and primed our stomachs for the entrees to come.

The menu, a large and laminated front-and-back cardstock print features a variety of options, a variety of starters and salads to categorized entrees. There is even a snack section featuring a few pub fare items such as a grilled chicken sandwich and a burger. Susan also placed a card with daily specials on our table, which is easier than trying to remember everything.

The menu features copious familiar dishes, and many of which are prepared the same way. For instance, the poultry and veal sections feature dishes of parmigiana, French and marsala to name a few. The seafood, pasta and meat sections feature more diversity. There is also a vegetarian section as well, and the options caught our eyes.

We opted for smoked mozzarella and roasted red pepper raviolis with a tomato, spinach and cream sauce ($15.95); the penne ortellano with sautéed tomatoes, artichokes, spinach and capers ($15.95); and the gnocchi dinner ($13.95) with vodka sauce ($2 extra).

The pasta and vegetarian entrees come with a soup or a salad. One of us opted for the Caesar salad. The dressing was creamy and the veggies sounded fresh and crisp. I and another opted for the soup du jour, which was a roasted red pepper soup with asiago cheese and spinach. Asiago isn’t my first choice of cheese, because too much can present an overpowering flavor. However, there was a perfect amount shredded atop the creamy soup. It was a delightful accompaniment, and I could eat it every day if I had to.

Between the salad and soups and arrival of the entrees, there was a little bit of a lag. Especially for three meals, it had us scratching our head. However, Susan, who apologized, must have read our minds and came to check in and let us know that the food was on its way.

It was tough to determine whether some of the pasta was homemade or not. The penne pasta was a boxed brand, but was cooked al dente. The raviolis may have been homemade. Aside from tasting wonderful, the pasta’s bulge was filled with more air than ricotta. The gnocchi, I have decided, was also not homemade, as they were very uniform of each other; however, they were cooked perfectly.

The sauces, however, are a different story. Each of the three dishes features different sauces, which presented themselves with confidence. They added a lot of flavor to the meals, and were complimented by the other ingredients. The capers in the ortellano weren’t overpowering either; there were enough of them to make their presence known. Having too many of those little flavor bombs can be too much.

The portion size was good to great. The ravioli dish was eaten in one sitting, but it was the right portion of food. Leftovers of the other two plates were taken in to-go boxes. My gnocchi dinner was a generous portion; eating the entire thing would have left me incapacitated.

The experience at Charley Brown’s left us with a $67 and change bill for three people, an appetizer and three entrees. We opted for iced teas, waters and soft drinks as well.

Charley Brown’s presented a very family-oriented experience, even for a group of friends. The food tasted very home-cooked, something my parents or grandparents would present. It’s clear why this family-run restaurant has been open for over 50 years.