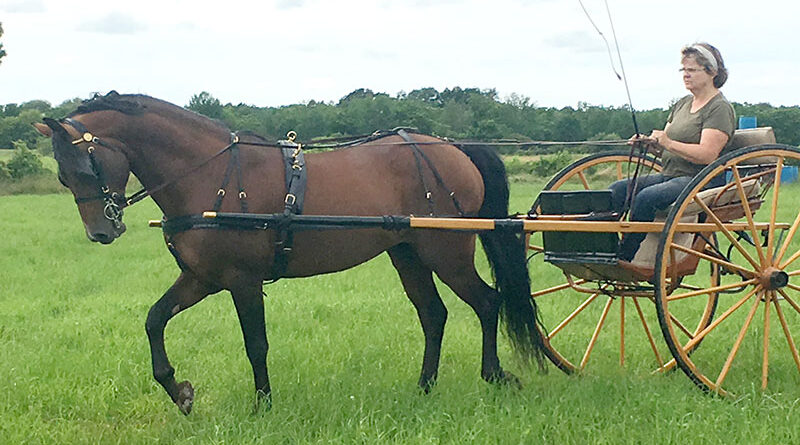 For Mendon horse breeder, there is the Morgan — everything else is just a horse, she says.

As you approach the Yelle horse farm in Mendon, you are struck by endless white fences and several horses calmly grazing.

Behind this scene is Cheryl Yelle, who is devoted to preserving the Morgan horse, America’s first breed of horse.

The Morgan is the only breed to have ever been developed from a (single) stallion, born in Springfield, Massachusetts, in 1789, and owned by Justin Morgan. The Morgan horse is the state animal of Vermont.

The breed has also contributed to several other American breeds, including the Standardbred, the Saddlebred and the Quarter Horse.

The Morgan was the one horse that could do everything and became the chosen horse for the early settlers, the wagon trains, the Pony Express and the US Calvary mounts, especially for the Civil War.

She took riding lessons as a young teenager on Morgan horses that are of similar lineages to the ones she now breeds.

That was where her love of the breed began.

Later in life and as the mother of four, she wanted to ride on the trails of nearby Mendon Park while her children were in school. She took lessons and soon decided that she wanted to have her own horse. She concluded that, because of their versatility, intelligence, energy and trustworthy disposition, the Morgan was the right breed for her. In 1991, she bought her first horse, a beautiful 16-year-old Morgan mare named Hillrose, “Rosie.”

Yelle researched Rosie’s heritage and the breed, in general. She talked with, and visited, many of the older breeders and learned that Rosie’s pedigree was unique. Not only was she a combination of old New York state Morgans, but Rosie didn’t have any of the more modern show lines of the 1930s to present. Those Morgans are the ones that are now referred to as “foundation” or “traditional” and are listed as endangered by the Livestock Conservatory.

As Rosie aged, Yelle realized she would not be able to find another horse like her and strived to find a suitable stallion. She decided to breed her to a stallion that had very old bloodlines that were behind Rosie six or seven generations. It took two years and a good veterinarian but in 1998, at 23 years old, Rosie gave birth to a foal, named Maggie.

“That was the beginning. Maggie had so many admirers. I had the opportunity to sell her several times, as people began to realize that they could no longer find a Morgan like that anymore,” Yelle said. “We rode trail and we both learned to drive a carriage. She was third in the nation for High Point Morgan in carriage driving, at 5 years old. When Maggie was 11, she was bred to an older stallion that carried all the same lines as her mother, Rosie. The result of that breeding is Hillrose Taconic Major, Hillrose Morgan’s herd sire.”

To pay for her horse hobby and not deplete the family’s finances, Yelle worked part-time to pay for all the horses’ expenses. She rented a farm for 15 years until she could buy a farm. She also had semen from her four stallions collected and frozen for future use.

“Because of the endangered classification, the USDA will take and keep the semen, after I pass, in case it is needed to resurrect the breed,” Yelle said.

She traveled to five states to look at potential mares and stallions that were the only ones left with any of these lines. She purchased three mares and immediately bred the older one, and kept the offspring to breed.

“I am the only one that has these lines, and had I not started when I did, they would be gone,” Yelle said. “I set out to save one stallion’s lineage and combine three to four New York state lines that I was very fond of but ended up saving or strengthening three.”

“I have been fortunate to get a son and a daughter from two of my stallions. I am now able to breed those daughters to my herd sire and other’s sons, to preserve these lines in some strength.   “Unfortunately, with preservation as a goal, I could not sell many of my horses to qualify for the exemptions of a breeding farm, to help reduce the expense,” she said. “As I age, it is harder to do the work required to care for and train these beautiful horses. But, when you are on a mission, you do what needs to be done, with love.”

Caring for the horses and the farm takes so much of Yelle’s time and energy she has had to forgo some of her other hobbies, including sewing and crocheting. Both she and her husband, David, have been members of the local Mendon Volunteer Fire Department and Auxiliary for 35 years and are now exempt members. “I also used to enjoy riding, carriage driving and occasionally showing my Morgans,” she said.

Yelle agrees with other Morgan enthusiasts who say, “There is the Morgan. Everything else is just a horse.”