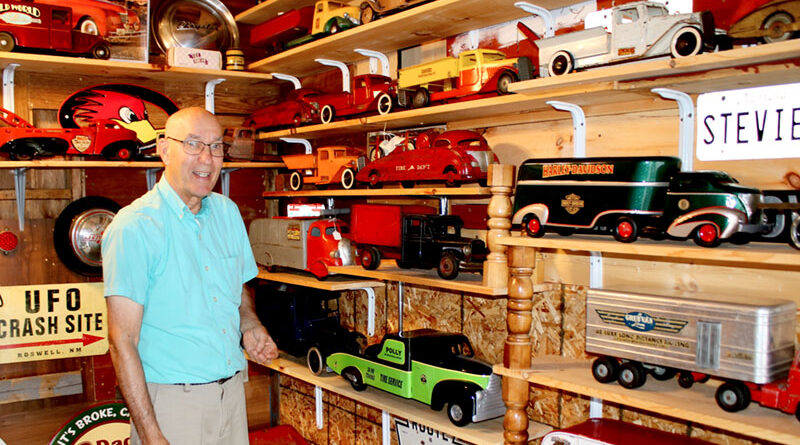 Did you have the moments as a kid?

You took out a toy car — bright colors, shiny, something you could easily hold in your hand — and you ran it along a smooth surface, such as desktop, the floor, the dining room table, a sidewalk, the sheets on your bed.

And to make the experience authentic while the wheels of your car were turning, you supplied the soundtrack:

Your dad smiled at you.

Your sister ignored you.

And your mom patted you on the head because you weren’t eating jelly off the floor.

Those cars were part of your growing up. At some point before you reached your teen years, you put those cars away. You were growing up. And then, at some time in your adulthood, you came across a die-cast (metal) car somewhere, and those old “rumble, rumble, VROOMs” came back to you.

For John Zornow, 76, that moment came 20 years ago when he decided he’d collect models of all the cars he’d owned over his life. An amateur historian whose lectures at the Newark-Arcadia Historical Society are often delivered to a standing-room-only crowd, he tied the models he acquired with parts of his life — mileposts, kind of.

Sitting in the breezeway of his home, he held a model of a 1948 rear-engine, rear-drive Tucker sedan in his hand — the last model he still has after gifting his collection to his grandson. And of course, there’s a story behind the model.

“Leon Stell and his brother from Wolcott signed up in 1947 to be one of the first Tucker car dealers,” Zornow said. “They went through all the rigmarole. Their dealership was going to be on the corner of Colton and Union avenues in Newark, where they had a garage.”

Tucker made cars, but none ever made it to the Stells’ dealership before the company broke up.

“Years later,” Zornow said, “Leon’s widow, who went to our church, told me, ‘I know you’re interested in old cars and I’ve got something for you to see.’ I went to her house and she had stacks of Tucker literature and magazines, showroom banners, order blanks and all this stuff.

“I held onto it, then the movie about Tucker cars came out (“Tucker: The Man and His Dream”) and all of a sudden people wanted to know more about Tuckers. I traded away some of those things,” Zornow said.

“But that’s not the end of the story,” he said. “Vic Thomas, a teacher, lived in town and when he died, his cousins settled his estate and showed up at the museum with some things to donate, including a sign hanging in the garage — ‘20th Century Motors.’

“My knees started shaking,” said Zornow. “That was the name of the Tucker dealership. How that sign got in that garage I’ll never know. Now it’s in the museum.”

Bill Bankert, 77, has had model cars for about 57 years. He hosted afternoon slot car racing every Saturday for kids in the basement of his modest home — with 500 linear feet of track and a drag strip — for many years.

“We had kids come from all over,” he said.

An upholsterer, he still works at Hallagan’s Furniture factory in Newark. Bankert has a jaw-dropping collection of metal cars. His garage contains large pressed-steel models big enough for a small child to ride on. The unrestored models grab your attention because they are just so rare — the restored models are works of art, harkening an age that is no more.

Bankert once repaired and collected antique bicycles and was the guy who would fix your bike for free if you were a kid in Newark. “My wife and I used to collect antique bicycles and we put 300,000 miles on a truck looking for them,” he said. The bicycles and the slot-car track gave way to his pressed-steel and die-cast collections, which have absorbed his garage and basement.

And Bill’s basement is full of die-cast cars, specializing in hot rods and competition vehicles of all kinds, thoughtfully arranged in floor-to-ceiling displays. He has thousands of cars and is a serious, persnickety collector: He’s been known to chase one particular Ford sedan model he knew existed for 20 years. He’s also had Chris Tones of Macedon do some customizing for him, building a special replica of a beloved hot rod in a different scale.

The Bankert basement has two chairs in it, a computer, and a stereo system that Bill describes as “ground-pounding,” with floor-to-ceiling speakers. He puts on some 60s music, works on his models, and bliss envelops him.

“My granddaughter came in and listened to some music with me,” he said, explaining that the air-suspension speakers “moved her hair” on certain low-frequency riffs. The earthworms out in the yard probably had the same reaction.

His biggest toy is a 1951 Ford Business Coupe that he’s turned into a period-correct hot rod, and you know he’s put some wrenching time in it. “You better start, sweetheart,” he says to it as he climbs in.

Ray Salerno, 59, is renovating his basement in a way to complement what his father-in-law Bill Bangert has done.

Salerno is very familiar to local motorsports radio audiences as “Racing Randy,” appearing weekly on the FM95.1 midday Ditullio & Moran show, is also finicky about what he wants in his die-cast models. He goes after “first win” NASCAR cars driven by a certain driver. If a sponsor changes the colors on a car, he’ll collect all the variations.

The first two cars in his collection were models of stock cars driven by Mark Martin and Kyle Petty, which he picked up in 1995. He also had models of dirt track modifieds and drag racing top fuel cars.

A master mechanic at Friendly Ford, Salerno has five children and eight grandchildren, and he’s already trying to line up progeny to take on the collection. His cars are not objects. Like Zornow’s mileposts, each car has a history, a spot in time and memories attached to it. Pull a car off the shelf and Salerno will tell you everything about it — about the race and driver.

Salerno is a hunter-seeker in his collecting. “I go to flea markets, garage sales, and bargain stores looking for models,” he said. Most of his models are in 1:24th scale, which means that the real car is 24 times the size of the model. “I’ve bought cars at Carlisle and online from California — whatever catches my eye. I used to collect all I could get my hands on; now it has to be something rare.”

He’s been on a quest to find a 1991 Food Country NASCAR stock car he believes Butch Miller drove.

“It’s one of the rarest NASCAR Racing Champion cars,” he says, wistfully. “It’s in a black box.”

Ray J. Delue, 54, is the proprietor of Ray J’s, a corner shop selling parts and accessories for American motorcycles in Newark. And although others pointed to him as a collector, he disagrees. “I wouldn’t say I collect them; I have them,” he said. “I didn’t go out hunting in flea markets for the ones I have. Most of them came from my father.”

He’s modest. In the shop are perhaps 20 die-cast and plastic cars and trucks, including a nice Jaguar XKE coupe on a top shelf. He also has a cupboard full of die-cast 1:64th scale cars and trucks (the size of Matchbox cars), each nestled into a slot. He has a truck model collection at home.

“They are just toys sitting on shelf,” he said. “I have all kinds of trinkets hanging around in the shop.” The prize of a visit to his shop is a very rare Danish-built Nimbus motorcycle that sits to your left as you walk in the door.

Because the cars are on view, they’re conversation starters — another beauty of collecting cars.

Die-cast cars come in all sides and shapes. Not every car ever made was turned into a model — only about 5%, according to experts.

But chances are, there’s a model car somewhere that will trigger a memory that has your name on it; something you can share with the grandkids.

Photo: Bill Bangert of Newark stands in his garage next to a portion of his pressed-steel toy car models big enough to be sat on by young children. These car models disappeared in the late 1950s.