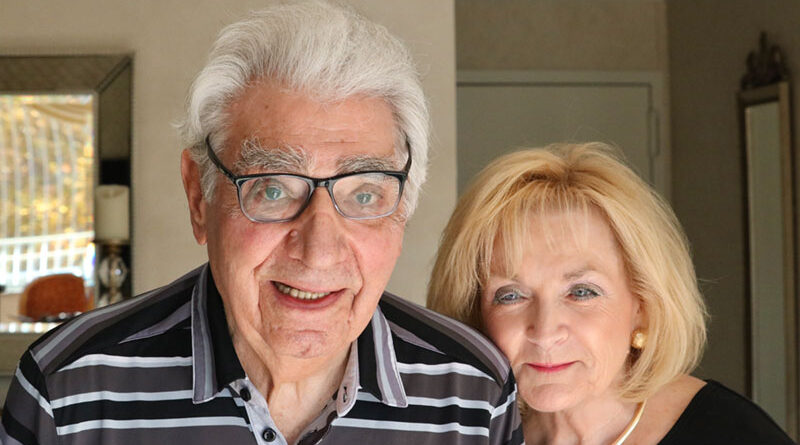 Bill Mendick of Rochester and his partner of 20 years, Maureen McCoy, have a special place in their hearts for Rochester General Hospital. They have, in the past few years, supported expansion and improvement of treatment facilities with gifts of more than $3.5 million.

The hospital foundation lists them as “Healthcare Heroes.”

Fate may find you being treated at Rochester General — and if you notice things are new or different or just nicer than they used to be, chances are Bill and Maureen had a hand in that.

Bill Mendick came to a life of philanthropy as part of a hard-working family of community donors well-known in the area, a story of hard work and shared accomplishment.

At the turn of the last century, Aftanas Mendick saw the promise of America as it unfolded before him in Rochester, far from the home he left in the Ukraine in 1904.

He raised his five children in values that developed in the shadow of the lake — teamwork in a strong family structure, hard work and opportunism, the value of community and developing it, and rewarding successful labors with fun and sharing among others.

The kids — Theodore, Joseph, Cashmere, John and William — grew and prospered, sprung from a decidedly old-world culture at home.

“I didn’t really graduate from high school,” said Bill Mendick, 89, the youngest of Aftanas’ brood. “I left school. My dad had room for me to go to work in his meat market — he had two of them at the time. I learned how to cut meat and I worked there until he died.”

There was some charm in that butcher shop.

Mendick remembers a young gray-eyed maiden who stopped by to smile and say “Hi.” He’d peel off a slice of the best bologna for her. That girl went to school and became a beautician. He went to her for his haircuts.

He still does. Her name: Maureen McCoy.

When Mendick’s beloved wife Margaret, who had shared his significant successes and bore him two sons, died 20 years ago, it was McCoy who helped fill the void. “She and I became an item after Margaret died,” Mendick said. “We take care of each other.”

Aftanas Mendick’s kids grew up to be generous, philanthropic community-builders, using their business gifts to build substantial real estate holdings — Bill put up 900 apartments with a variety of partners — he was a “go-fer.”

“My oldest brother, Theodore, and I always like real estate,” Mendick said. “With the money he had — much more than I had — we bought real estate with our brother John and a brother-in-law, Jim Coyne. We bought real estate in the neighborhood — single homes, double homes, whatever had a return on investment in the city.

“Then I snooped around and became friends with some builders and I was able to secure a building loan for 40 apartments in Irondequoit. My partner and friend – Anthony Comparato, and his father, Nick –taught me the building business. Nick said I was a great student – if he told me something once, I’d remember it forever. Our first apartment building was on Ridge Road East. We had 350 apartments on Stone Road in Greece.”

Mendick and his brother Ted then bought out the Comparatos and built a second apartment complex on St. Paul Boulevard. Two more partners, George Cefalu and Roy Bruno, helped the Mendicks put up 454 apartments in Brighton on Crittenden Road.

“My brother Ted told me I was a high-flyer. He told me, ‘I’m just a little old guy who wants to make a nice living. I’ll give you the big stuff we’re partners at, and you give me one little one so I can sit back and maybe push a little snow around myself if I feel like doing it.’ He wanted nothing to do with expanding the business. He said, “I know you’ll continue going on. God bless you: I hope you don’t go bust.’

“When we bought that clothing company, that was a departure for us. Ted told me I was a ‘go-fer’ and when you’re a go-fer, you’re a go-fer for anything. I’m not a go-fer anymore,” Mendick said.

“Anything” included buying a business office building in Atlanta, Georgia. A friend spied the government sale and the bidding started at $15 million – with no takers. Mendick finally acquired it for $1 million and knew he had a going concern — the Internal Revenue Service was a prime tenant and wasn’t going anywhere. Years later he sold the property with enough left over to send $1 million to each of his sons — Billy (William T.) and Michael — who have become successful in their own businesses of business parks and raising horseradish, respectively.

Eventually Mendick sold all his holdings except an apartment building in Syracuse. His wife Margaret’s death started the pull-away, and when brother John died 10 years ago, Mendick walked away from just about everything, doing a lot of traveling, golfing … and philanthropy.

Three years later, his $1.5 million contribution to Rochester General helped birth the new William B. Mendick Medical Observation Unit. When patients arrive and need to spend some time while tests finish and the hospital decides whether to admit them or not, this is where they stay in one of 24 private rooms.

And Mendick helped design the place. “There are no curtains — not in my unit,” he said. “Just doors and windows. I wanted private rooms where people could be comfortable.”

This fall, Mendick’s $2 million gift to RGH helped create the surgical care second floor at the sparkling new Sands-Constellation Center for Critical Care where surgeons began using the 23 new state-of-the-art operating rooms in November, coupled with the 28 post-anesthesia care units. That floor is known as the William B. Mendick Surgical Center.

Go to the RGH website (www.rochesterregional.org) and you can take a virtual tour of what Mendick has helped provide for the community. It’s impressive.

And RGH is not only the beneficiary of the Mendick generosity.

Mendick and his brothers Ted, Cashmere and John have all been active, substantial donors to the YMCA, Al Sigl Center, Mary Cariola Children’s Center (there is a Patty Mendick Hall there), and St. Ann’s. There’s a Theodore and Cashmere Mendick Cardiac Suite and Evaluation Unit at RGH. John supported the Irondequoit ambulance and fire departments, and funded a television studio at Bishop Kearney High School.

Asked what got him started in his philanthropy, Mendick got a look on his face: he had to think about that for a moment.

The example of his older siblings was a circumstance, sure. But Maureen had the answer.

“You wanted to better the healthcare of the community,” she told him. “You always wanted that.”