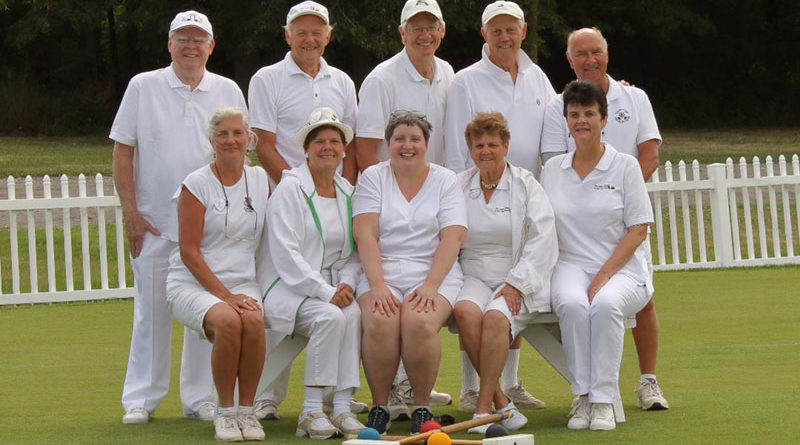 Greece croquet players say the sport has many elements to it — it’s competitive, social and exciting, they say

Once you’ve racked up a number of years, you start to think about limitations — what you can no longer do, particularly if sports were part of your life…but in your heart, you’re still ready to rip — but rip at doing what?

Sue Sherer asked herself that question.

“At my age, what am I going to do in playing a competitive sport? There’s not too many sports you can compete in at age 65.”

But she found one.

And she’s inviting you to come on down and join her.

Greece residents Sherer and her husband, Peter, have found a sport that’s welcoming, competitive, social and exciting, and hugely popular with people in sunnier states.

No, not that croquet, not the backyard game, U.S. Croquet Association games.

“What you’ve played on someone’s lawn is the easier game of 9-Wicket, with the goal of getting your ball through all the wickets. For the American Rules game, the lawn layout is different and it’s very much a game of finesse,” Sherer said. “People who are good at chess and who can think ahead several plays — people good at billiards who understand banking and angles and topspin — they’re very good at the game,” she added.

The club plays both games, hosting a golf croquet tournament on June 6, and an American Rules event on Aug. 14-16.

Peter and Sue are the director and treasurer, respectively, of the Rochester Croquet Club, which has two courts at the Grace & Truth SportsPark in Greece.

The club is one of 16 in the state, with just four in Western-Central New York. You can look for events and games, with regular play on Tuesdays, Thursdays and Saturdays.

You don’t have to be a member to play; in fact, the club will sponsor you for three free games, then ask you to join if you wish to continue.

And you don’t have to have any equipment, which is a lot more specialized than what you play with in your backyard. The mallet used, for instance, is much heavier and more purposeful, which belies the origin of the game itself, which was either in the early 1800s (in England) or the mid-1880s (Ireland). Lewis Carroll’s Alice and Cheshire cat mentioned croquet in 1865.

The wickets (those wire things you have to poke the ball through) in the real game are much higher and narrower (“About a nickel wider than the ball,” Sue Sherer says), and even the ball is heaver than the backyard version.

It takes about an hour to play a game of croquet. There are some rules and sequences to learn, and Sherer, who is the club instructor, will patiently teach you how to play the game right.

“It’s a gentle sport in terms of bending and flexibility,” she said. “You just keep moving and getting steps in — it’s a great way to get mild exercise for people who are somewhat limited. It’s not as physically taxing as golf, but you are bending and swinging a mallet between your legs — a different stance than the backyard game where you swing from the side.

“Croquet is very social; it’s not so much about winning. It’s more fun and more equal. Anyone can win in Waterford Doubles tournament [where you’re playing with a partner]. One of the comments we often hear is, ‘You guys are so friendly.’ This is a great sport, a great activity. It would be great for a widow or widower who’s not getting out and about much. It’s a great social outlet.”

Sherer said as players elevate to the American Rules game, skill in hitting the ball is equality as important as thinking strategically, plotting moves ahead of the competition, and being able to manage trick shots.

But there’s also spice in the competition, Sherer said. As a member of the United States Croquet Association, she has a handicap — like golf — and carries that with her to tournaments, where she plays in a flight of others with a similar handicap, or can be matched with a partner in Waterford play where the handicaps are much different.

“The game can be played by young or old, male or female. I have seen youngsters succeed over mature players and women who compete equally with men. The older we get, the less likely we are to be able to compete nationally in more physically demanding sports, but croquet can feed our competitive bent at any age.”

RCC’s courts in the Grace & Truth SportsPark, a ministry of the First Bible Baptist Church, has existed since 2007, built by Norm Pike. It uses a special bentgrass, very similar to what’s on a green at a golf course, cut low and tight.

That pristine, perfect lawn provides the backdrop for the gentility of a tournament, when etiquette calls for all-white clothing. Blink your eyes and you could be looking at a scene from the British Empire.

Play at the SportsPark court, once it begins this spring, will be by reservation at this time, on Tuesday and Thursday. The park is at 373 N. Greece Road. You can check on event dates at www.roccroquet.org or send questions or requests for information to Sue Sherer at roccroquet@gmail.com. If there’s a problem with the weather or the course is too damp, play will be called off an hour before scheduled.