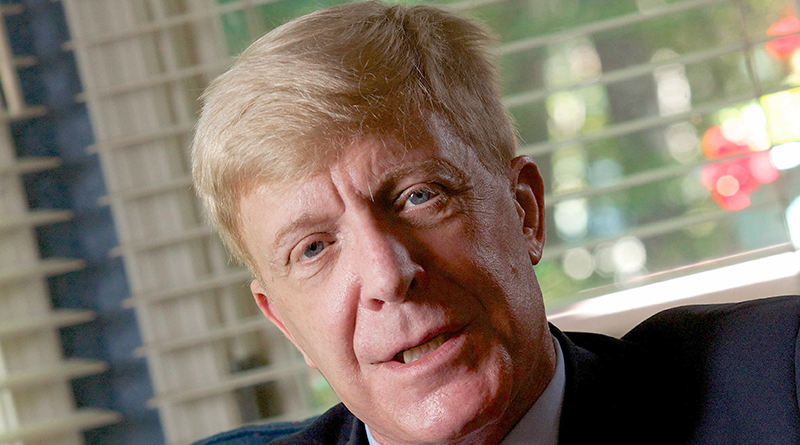 Former presidential speechwriter Curt Smith has long written about his two biggest interests: baseball and politics. In his 17th book, out now, Smith writes of the connection between the occupants of the Oval Office and America’s favorite pastime. Raised in Caledonia by two teachers, Smith was a speechwriter for President George H.W. Bush both during and after his time in the White House. Currently, the Chili resident teaches at the University of Rochester, writes a column for Gatehouse Media, and is a contributor to various publications. He will soon do a book tour for “The Presidents and the Pastime: The History of Baseball & the White House.”

Q. When did your interest in politics begin?

A. At an early age, I would devour the Democrat and Chronicle before [my parents] were up, focusing on the front pages and sports section. Baseball was the dominant sport then. We bought the complete set of World Book Encyclopedia and I spent summers on the front porch reading through volumes of World Book with a glass of milk.

Q. How did you get the idea for this book?

A. In 2015, I finished my 16th book [“George H.W. Bush: Character at the Core”]. I realized it was time to write about the two great loves of my life, besides my family. Delightfully, I discovered no one had written an in-depth look at the kinship between the institutions, which frankly surprised the heck out of me. This is how I spent the last three years. Basically, as I describe it, this has been my ‘Moby Dick.’ It’s a personal book. It’s an historical book. I have done ample research…and tried to personalize the presidents.

Q. What’s the connection between the game and our leaders?

A. George Washington threw a ball for hours playing rounders [an antecedent of baseball]. Abraham Lincoln played town call on the South Lawn, or “south lot” as it was called. Teddy Roosevelt was the only president who hated baseball. It was too gentle for him. Here was this man who triumphed over everything [and] he couldn’t defeat baseball. He couldn’t say he hated it because he’d get thrown out of office.

Q. Does every occupant of the White House have a relationship to the sport?

Q. When did your love for the game begin?

A. I’m a Red Sox fan. I have the scar tissue to prove it. My mother was from Worcester. I inherited my Red Sox DNA from her. In the summer we’d go to our grandma’s house and as our reward for doing work at Grandma’s house, Dad would take my brother, Russell, and myself to see the Sox play. My first major league game was Aug. 30, 1960. It was the 42nd birthday of Ted Williams. He was retiring in a month. Talk about a thrill to see the greatest hitter by consensus of all time playing. I remember saying to my father — I was only 9 — ‘Why are the fans here cheering louder for number 9 than for any other player?’ Whenever we went to Boston, the radio was on and people were listening to games.

Q. What is up next for you?

A. I’ll be doing a publicity tour. I’ll be speaking at FDR’s presidential library. I’ll be on C-SPAN. I’ll be at the Baseball Hall of Fame. This is a book I’ve put a lot into. Then, I will take some time off.