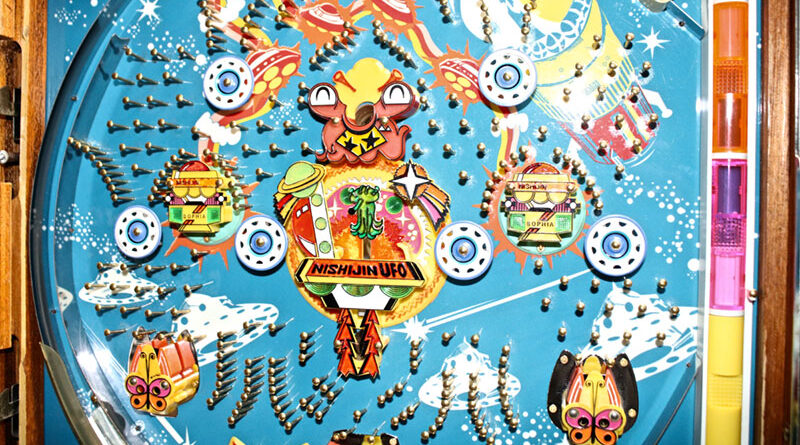 Hilton resident is one of the few in the country who refurbishes Pachinko machines. He buys, sells, fixes them and has customers all over the United States

Walk into Dan Welch’s garage on the shore of Lake Ontario in Hilton and the first thing you notice is that there are five Pachinko machines sitting on his workbench.

There are at least three more — one in pieces and boxes — on the floor.

And you ask, “That is a Pachinko machine and why are there a bunch of these Japanese gaming machines in a garage in Hilton?”

There is magic in the answer, quite literally.

Welch, 69, has more Pachinkos in his house next door. He collects them. He sells them. And a bit more than six years ago he found that he could make a living in a cottage industry few know exists: refurbishing Pachinkos for customers all over the United State.

He has fans who visit his website (www.magicpachinkorestorations.com), read his blog, catch him at shows or call him on word-of-mouth referrals. He’s one of fewer than a dozen people in America who do what he does.

So far, Welch has restored 128 machines. He has seven more lined up to keep him busy through Christmas, and has a couple more being shipped to him.

But just what is a Pachinko?

You might remember seeing some news coverage about Pachinkos in the 1970s, stories about Pachinko parlors where a family might share dinner and game night. Pachinkos are a little bit of a cross between a pinball machine and a slot machine.

Each Pachinko is about 21 inches wide and 32 inches high, maybe 7 or 8 inches deep. They weigh 40 pounds, and have a 10-volt electrical system. So, you can put a bunch of them on your garage workbench if you like – but you’ll have a problem extracting yourself from the garage. Playing Pachinko is addictive. Highly addictive.

You start the game by impelling one small Pachinko ball — an 11mm chrome-plated (or brass/gold) thing that looks like a ball bearing smaller than a dime. It flips up inside the machine, and drops. As the ball falls, it is bounced around by small brass nails that cause it to take a bobbling trajectory to the bottom. If the ball finds a special hole on its way down, it drops into the machine and rewards you with more balls.

Some of the places the ball drops into are jackpots and cause a whole swarm of balls to drop down into a tray at the bottom. In newer machines, lights flash, bells ring, video images move, and everybody in front of the machine smiles.

“Pachinko machines have been around since the 1940s in Japan,” Welch said. “Pachinko is ‘the’ thing to do, the national pastime. There are 12,500 Pachinko parlors still in Japan. It’s what you do with your family or on a date. Everyone plays Pachinko. … Into the 1960s, thousands and thousands of these machines were being produced.

“There is no legalized gambling in Japan,” he explained. “A Japanese businessman, at the end of his day, would come in to play Pachinko and relax. He would buy 100 balls and sit at a machine and play for an hour. Ultimately, he’d cash out. Hopefully by then he’d have 200 balls, and would actually leave the parlor and go next door to a redemption center, where he might get four packs of cigarettes and a coffee mug. That was in the ‘70s. Now you can get a coupon, then go somewhere else nearby to get cash back.”

Welch also explained that Pachinko became a life-or-death thing for Japanese after World War II. “The Japanese people were too proud to accept government food charity,” he said, so the government decreed that from now on instead of winning cigarettes and a mug, you’d win food.”

After spending a couple of years at St. John Fisher College studying biology and sociology, Welch couldn’t quite connect with what he wanted to do for the rest of his life and left for a job at Kodak, where he spent some initial first years. A semi-professional magician, he and wife Jodie also opened a magic shop in the now-defunct Westgate Mall.

“We had that shop for eight months. I met a lot of people in sales, and that type of job intrigued me, so I voluntarily left Kodak for a couple of years, selling, working in grocery stores as a rep,” he said. “I worked for a food broker out of Buffalo. I wanted to get a job with a major brand like Proctor and Gamble, Folgers Coffee and represent them. But it was the wrong time. It just wasn’t meant to be. I ended up going back to Kodak, starting there all over again.”

He had a good run at Kodak, there for 28 years total as a service engineer for the Themed Entertainment Division. “We made the photo-taking systems for Disneyland, Disney World and Universal Studios. Our systems took digital photos of people at places at the roller-coasters, and you could buy the photos. We built those systems and installed them on the rides.”

“When you went to Disney, an employee would come out and take your picture in front of the Magic Castle and give you a ticket and later on you could turn the ticket in and see a picture and get it printed. That job allowed me to travel all over the United States, South Korea, Singapore to install systems. It was a good job while it lasted.”

He got caught in corporate shifts and downsizing in 2001.

“They didn’t need me anymore. They wouldn’t sign a job requisition and that was the end of my Kodak career. I kicked around for about a year after that – I was just a mess after losing my job of 28 years … you don’t know what to do with yourself.”

Many in this area know just how Welch felt.

His son, Jason, pulled him out of the darkness. “He was selling Volkswagens for Dorschel,” Welch said. “He called me and said, ‘Dad, we need salesmen, and you need a job.’

“Jason said, ‘Let me run that by you again, Dad – we need salespeople and you need a job.’

“So I ended up selling cars for 13 years, Volkswagens specifically. I moved over to Ide and sold them there, and I retired when I was 62.

“My brother-in-law lives in Allegany. Right over the border in Bradford, Pennsylvania, is a big auction every other Sunday. He goes all the time, and six, seven years ago he ended up buying four Pachinko machines at the auction. He’s mechanically inclined enough that he could get them cleaned up a bit and actually get them working. I went down and saw them and just absolutely fell in love with the way they function — they’re mechanical marvels. They just fascinated me. I told my wife, ‘I’ve got to get one of those.’

“We came home and I started looking around in garage sales and found a Pachinko quickly, which I bought, brought it home, cleaned it up and got I it working. I’m the kind of guy who likes to take something that’s old and dirty and clean it up and make it look good again.

“Pachinkos can be in bad condition. To spend a week getting it into good condition is just extremely satisfying. I enjoy it tremendously. They only lasted about a year in a parlor, because everybody smoked, and the places were just absolutely blue with cigarette smoke. The oil from your hands transferred onto the balls, then went inside the machine. After the oil and the smoke and general abuse, a Pachinko lasted about a year – then they were taken out and replaced with new machines. They were chucking the old machines into landfills.”

The landfill-dumping stopped in the 1970s, when enterprising companies decided to get them into working condition and export them to America, where they sold lots of Pachinkos for $35 or so through Sears and J.C. Penney’s and Montgomery Ward.

On a given day today, he says, you can find 300-400 of those vintage Pachinkos for sale on eBay and Craig’s List and OfferUp and Facebook Marketplace, with most of the asking prices way above reality.

For what he terms a “common” machine, Welch will rarely go much beyond $50 to buy it — and he does. He knows what the challenges are. If someone asks him for a basic restoration — to make their Pachinko fully functional, all power restored and all lights working, thoroughly cleaned and refreshed, he charges $400 and it takes him a week to do the work.

To do a frame-off restoration down to the bare wood, taking the machine completely apart, replacing or building parts (he uses a 3-D printer), and refinishing the Pachinko — $600. If he has to add new artwork (the vibrantly colored back wall of what you see on the machine), that’s another $150. Customers also pay shipping and parts costs.

Whether you think his charges are high or entirely reasonable, Welch cements the deal with customer service.

“I’ll accept the machine, then call the customer about what I think has to be done to make it look good. When we’ve agreed, I take pictures of the machine being torn apart, then being rebuilt. I send them to the customers and they absolutely love that, to see the machine and the detail I go through when I do the machines. They get all excited when I tell them I’m starting to rebuild their machine.

“And when I’m done, I make a video of the machine, explaining what I did to restore it, how to properly set it up, how to troubleshoot it, then show machine in action. The video is linked to them. I’ve been told the reason people bought machines from me is because of the videos. As far as I know, I’m the only one in the country who provides the videos.”

He has machines he’s purchased ready to be restored, but always works on customer machines first. One of the most satisfying things he does is to hear about how much a particular Pachinko meant to a family 40 years ago, and knowing that his restoration will be a great thrill to the family or a cherished member.

“What I really enjoy is having a customer call me and say, ‘I have a Pachinko machine that I want to get restored, and here’s the back story on it.’ It’s the back stories I really love.”

People ask Welch, “How long will the Pachinko last once you’ve restored it?”

“Forever,” he answers. “It becomes a family heirloom. I guarantee them for life — my lifetime. They should function forever.”

Every Hilton morning, wife Jodie is sitting in her work area off the kitchen, enjoying the morning sun coming through the windows.

Photo: Part of the allure of a Pachinko machine is the artwork and graphic package. A flat, vinyl-like art layer forms the foundation of what you see on the machine. Dan Welch works with colleagues to replace and reconstruct this artwork on machines being restored.