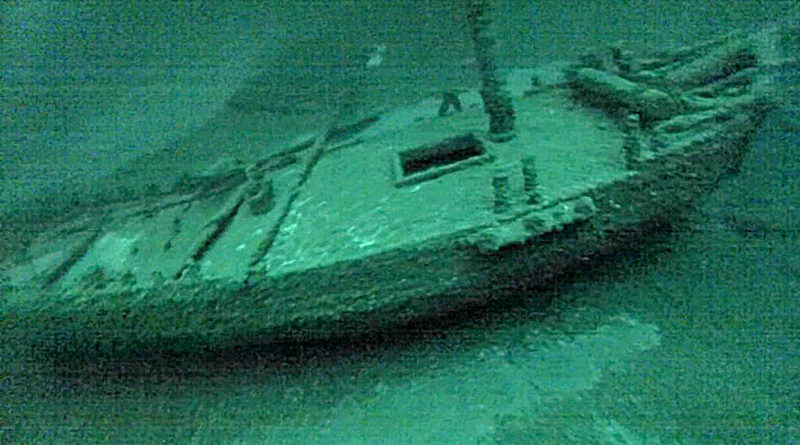 Shipwreck hunter reflects on his many underwater adventures

The word “shipwreck” conjures up images of sunken treasures hidden in the nooks and crannies of old hulking vessels sitting at the bottom of the lake or sea.

But for Jim Kennard, who started diving about 50 years ago, the treasure is in the exploration.

The 76-year-old Fairport resident explained, with a chuckle, that if he had found any treasure, he would have retired when he was in his 30s instead of just a few years ago.

It’s all about the hunt and history for Kennard, who has estimated that he’s been the original discoverer on nearly 200 wrecks since starting in 1970.

“I think it’s the quest for exploration that drives you,” he said. “It’s like being a shipwreck detective.”

When one hikes mountains, more than likely, somebody has been there before. There isn’t the thrill of being the first one on a mountain, he said.

“But you can be the first one who has found a shipwreck, and the first one to be there to see what it is. It’s uncovering history.  It’s writing the final chapter of what happened to that shipwreck,” he said.

He’s done more than write a final chapter or two.  He has authored a book, “Shipwrecks of Lake Ontario: A Journey of Discovery,” published in 2019, in which he chronicles his adventures and shares the history of more than 20 shipwrecks that have been discovered in Lake Ontario.

In the book, Kennard also shows a map of Lake Ontario that is broken up into sections. According to this diagram, there are 22 wrecks in the area that spans from Rochester, past Oswego and further north toward the St. Lawrence Seaway.

Throughout the book are photos by Roger Pawlowski and artwork by Roland Stevens, two members on Kennard’s discovery team.

In the decades that he has been involved in shipwreck exploration, Kennard has pored over studies, newspaper stories, and insurance and government records, and has concluded that more than 600 ships sank, wrecked, burned or were scuttled in the lake, and furthermore, he estimates that 200 still remain in the lake today.

Kennard began diving after hearing of the adventures that Ralph Sylvester, co-worker at the former General Motors plant in Rochester, had while diving in Lake Michigan during the 1960s.

“Boy, this really sounds interesting. Gosh, I’d like to do that,” Kennard recalled.

He took a scuba diving class at the YMCA in Rochester to get the feel of being underwater. It wasn’t long before Kennard was diving throughout the Finger Lakes and other area waterways. At the suggestion of a friend, they traveled to St. Lawrence and Alexandria Bay, where he was able to make his first shipwreck dive — on The Islander.  It was a tour boat that had burned at the dock in 1909 in about 40 feet of water, so it was easily accessible.

In his early days, when admittedly, he was still dreaming of finding real treasure aboard one of these shipwrecks, he had learned of a book titled the “Directory of Shipwrecks of the Great Lakes.”

In search of history

One of the wrecks highlighted in the book is the H.M.S. Ontario, a British warship. At well over 200 years old, the ship had been thought to be the oldest yet-to-be-discovered shipwreck on the Great Lakes.

Kennard was still new to diving and intent on finding this ship and the supposed loot. This was well before laws were enacted prohibiting anything from being taken from a sunken ship.

But after two years, he gave up the hunt. Yet, he remained so captivated by the ship and its history, he was able to get an admiralty drawing of it, which hung on his office wall for years.

And while Kennard might have given up searching for the Ontario — for the time being that is — he did not give up his passion for shipwreck diving.

Although he lives in the Rochester area near Lake Ontario, diving there was somewhat challenging. As a recreational diver, Kennard is limited to safely dive down to depths of about 135 feet, but most of the shipwrecks in Lake Ontario would be several miles offshore in water that is more than 200 feet deep.

So, Kennard and his diving buddies continued searching the Finger Lakes, where they located about 30 canal boats, and Lake Champlain, which became as he terms in his book, their shipwreck playground.

On one such trip in 1983, he and Scott Hill, another diver, came upon what Kennard refers to as “our pinnacle of success” — a very early horse-powered ferryboat, off the shore of Burlington, Vermont. A few years later, they were invited on a National Geographic expedition to Lake Champlain to locate a Revolutionary War ship.  While in the area, they were able to take the magazine team to the site of the horse-powered ferryboat. A remote-operated vehicle was sent down to video the shipwreck, and it became a nine-page feature article in the October 1989 issue of National Geographic.

The way people found shipwrecks in the 1960s and ‘70s was by using a fish finder, Kennard said. This would require the divers to go over a wreck in their boats and let the fish finder locate something protruding from the bottom, Kennard explained. Maybe it was a shipwreck, but it could be something else entirely.

He soon learned about side scan sonar that, he said, paints a sonar image of the bottom, much like an aerial photograph of the bottom. He also found out this technology was mostly utilized by geophysical survey companies in helping oil companies map out the bottom of a sea floor before laying down piping.

Kennard figured he’d just buy one of these pieces of equipment.

He had a contact or two in the industry who provided him with some tips on building these units. By using his electrical engineering background, he was able to build one that served his purposes for at least the next 30 years.

The equipment also allowed him to create a sideline business for himself, working for river transportation companies to discover lost barges along the Mississippi and Ohio rivers.

These need to be located, Kennard said, since they can cause obstruction on the waterways and damage to other river transportation.

Kennard took a break from diving for several years to spend time with his family. But in early 2002, a trip to an area dive shop proved fortuitous. He had been looking for others interested in shipwreck diving, and the shop owner had suggested a technical diver who had more specialized equipment and training and could go well beyond the maximum 130-foot-depth allowed for recreational divers.

Minutes later, Dan Scoville, one such technical diver, entered the store. The two got chatting and within a few months, they were a diving team. Because of Scoville’s ability to dive in depths down to 250 feet, Kennard was able to realize his dream of finding shipwrecks in Lake Ontario.

Although Scoville could dive deeper than Kennard and get images or video of these wrecks, he couldn’t stay down there long enough to get good video, and several dives can become time-consuming since safely ascending and decompressing can take over an hour.

However, Scoville would soon help to build a remotely operated underwater vehicle, or an ROV, that is operated from the searchers’ vessel.

It can search at greater depths and capture images with greater detail than a diver could.

Kennard and Scoville were both working for Kodak at the time, and Scoville, who was in the company’s instant camera division, was attending a class at the Rochester Institute of Technology.  With his work experience, Scoville was able to sponsor a senior class project, and so he and his team of mechanical, electrical and software engineering students decided to build an ROV, equipped with lights and a camera.

It worked on its first trial run, Kennard said, and they used that for several years to come.

“That really helped us, because now we could search much further out in much deeper water,” he said.

In 2008, Kennard, armed with this new equipment and research gathered over the years, along with Scoville and Roland “Chip” Stevens returned to the search for the H.M.S. Ontario, which had eluded him decades earlier.

Eventually success would be his “fulfillment of a life’s dream,” as he and his team were able to actually find the shipwreck and capture images of it with the aid of the ROV.

In his book, Kennard provides a great deal of detail about not only the search but the history of this legendary ship.

Scoville would transfer out of state several years later, but Kennard found another diving partner, Roger Pawlowski, who had an ROV and larger boat than Kennard did, so it is better able to accommodate divers along with equipment.

A nationally renowned artist, Stevens is the team artist and is an “integral part of our success,” according to Kennard.

“We realized early on that because of the limited visibility that existed back then, that you can’t take a picture of the whole ship. You get pieces of it. It’s hard for people to put the pieces together in their mind. We felt that we really need to illustrate the ship in the presentations that we were doing, to really show them what the whole thing looked like,” he added.

Friends and colleagues over the years had been encouraging Kennard to write a book, he said, but he brushed those suggestions aside until 2017.

He had been hiking in 2016 when he suffered an ankle injury and torn tendons. He was going to be out of commission, sitting in a chair with his leg elevated, he said.

“Well, I can sit here and watch TV for the next three months, or maybe I should write the book that people have been telling me I should write,” he said.

So, he started and got most of the chapters done, but once he had recovered, he was eager to get up and out, so the writing was put on hold. It wasn’t until November of 2017 that he decided he needed to finish those chapters.

His wife, Marilyn, was instrumental in editing the manuscript, and their son, Jamie, a graphic designer, did the book cover, incorporating one of Stevens’ watercolors.

Stevens’ artwork is also featured throughout the book as well as many of Pawlowski’s photos. The book was published by the National Museum of Great Lakes, located in the Toledo Maritime Center in Toledo, Ohio.

While his book is done, Kennard is certainly not.  As the book’s subtitle, “A Journey of Discovery” suggests, Kennard’s own journey continues.

He’s now searching for a B24 Liberator bomber aircraft, named “Getaway Gertie,” that was lost in snowstorm in February 1944. According to Kennard, it was last heard flying over Oswego about 2 a.m. on or about Feb. 18.

“I am tenacious and persevere to achieve the goals that I have set forth to accomplish,” he noted.

With that determined spirit, Kennard may soon be writing the final chapters of “Getaway Gertie.”

Those interested in learning more about shipwreck diving and Kennard adventures can visit www.shipwreckworld.com.

Photo: The sloop, Washington, was discovered in Lake Ontario off the shores of Oswego. In 1803 it was traveling between Kingston and Niagara in Canada, when it encountered a gale on Ontario. The crew redirected the sloop to seek refuge at the port in Oswego. It never made it to the port. Photo by Roger Pawlowski.