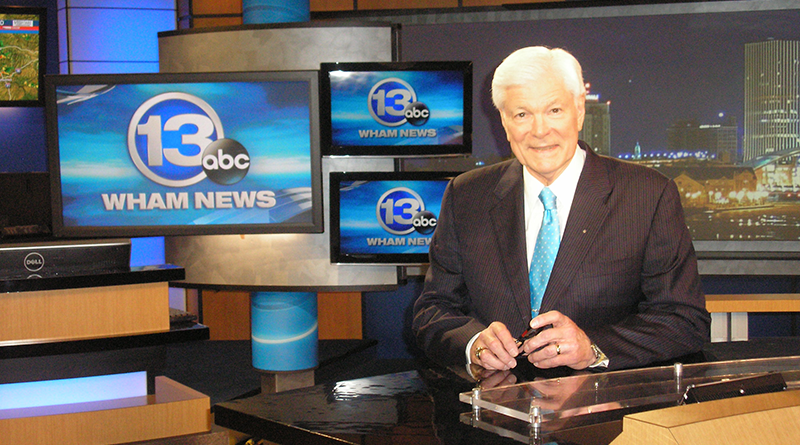 Longtime Rochester TV anchor talks about covering the news, his retirement plans and on being included on the Guinness World Records as the record holder for ‘longest career as a television news broadcaster’

At 73, Don Alhart, WHAM-TV’s well-known nightly news anchor and associate news director, has a lot to be proud of — not that he’d point that out. For over 51 years, Alhart has brought his easygoing, down-to-earth reporting style to stories as small as the birth of quadruplets and as big as the destruction of the World Trade Center. The Rochester native is a five-time winner of the prestigious Edward R. Murrow Award and a 2010 inductee into the New York State Broadcasters Association Hall of Fame. Alhart also gives a great deal of time and energy to local causes and is a past president of the Rochester Rotary Club and past governor of Rotary District 7120.

Married for 47 years, the father and grandfather credits his wife, Mary, for giving him the support he needed to meet his profession’s demands. The pair sold their house in Penfield, and recently moved into a brand-new townhome in Pittsford. Alhart continues to anchor WHAM’s weekday newscasts at 6 p.m. and to co-anchor them at 11 p.m.—though that could change in a year or so.

Q. Guinness World Records just announced that you hold the world record for “longest career as a television news broadcaster.” As of last Dec. 2, you’d put in 50 years and 179 days for the same station, beating the previous record of 49 years and 218 days. How’s that feel?

A. It’s flattering to be recognized for really doing a job that I’ve loved for over a half century. The recognition is special, of course, but more important is the fact that even with the record, it kind of speaks to the fact that I still enjoy what I’m doing — I still enjoy going to work.

Q. Fifty-one years in broadcast news is quite a spell. What’s the secret to keeping viewers tuned in?

A. I never have read the news. I always try to converse. If there’s been any success over the years, I think all of it has to do with just being on so long — you become comfortable with people and people become more comfortable with you. I also make it sincere and conversational — just kind of talk to people and tell them what is going on.

Q. How does that work on the air?

A. We did a spontaneous story — we had quadruplets born. I’m standing right by a monitor with these four little babies and one was yawning and one was crying and one was smiling. Before I started reading the intro I turned to the camera and said “I just nicknamed them, here’s Sleepy and Happy,” and then read the intro.

A. On 9/11, I think it was that same thing. It was like “I share with you the terrible grief of this day. I am sharing with you the fact that I am probably talking to people who are watching who have a friend or a relative that was in 9/11. I may be talking to people whose husband is a first responder, whose wife is a first responder.” I’ve always kind of stressed that to reporters. Don’t just read a news story — think about who’s watching.

Q. Has TV news changed since you began covering events?

A. Modern journalists are sometimes accused of knocking on the doors of grieving families a little too often. Long before we had all the modern technology and communications, we’d be sitting in the newsroom and clearing that AP [Associated Press] paper wire ticker. It would be a simple sentence: “Staff Sergeant so and so of Rochester, New York, died in Vietnam.”

I can remember Dick Burt going to our crisscross directory and finding it, and then very delicately calling the family. You’re reasonably sure that the family’s been notified if they’ve put it on the wire but you don’t know 100 percent, and you very delicately are trying to just to say “We want to honor and respect the person you’ve lost.”

A. Now, sometimes we go looking for the controversy. I can understand it, with the competition on cable and everything else, but I think there’s this need to set yourself apart or to grab stories. It’s almost to the point now, with some of the stories I’m looking at, is this really news?

Q. What advice would you give young broadcast reporters?

A. I’ve always kind of stressed to reporters to don’t just read a news story — think about who’s watching here. Go to the mall, sit in this chair and watch people. The next time you write a story remember their faces, because that’s who you’re speaking to. You can write a piece of literature that would win a Pulitzer Prize, but if the people that are walking thorough the mall or down the street don’t understand it, you’re not going to communicate to them.

Q. You have a copy of a black-and-white Democrat and Chronicle photo from 1986 in your office that shows two men wearing broad smiles and work clothes. What’s that all about?

A. The caption, to my recollection, was that these two gentlemen worked for the city of Rochester, and their primary job was to pick up dead animals. I said “Look at those faces. Happy as you could be.”

I said, “I’m going to keep this in my office on my desk. On those days when I’m saying I can’t stand this job or life has dealt me a bad blow or whatever it is, I’m going to look at those two guys and say ‘If they can be happy and smile doing that, how can I ever complain?’”

Q. Do you have any post-retirement plans?

A. If I wasn’t working in news, I could do voice work or narration for videos. Commercials and that type of thing, too, probably with the same creativity that I’m able to express here, but finding new ways to express it on your own terms.

Q. I understand that you write children’s stories. Anything in the works?

A. I wrote a couple of them. I’ve written one about a mouse who lived at Sibley’s downtown. It lives in the toy department. It overhears everyone saying they’re going to close Sibley’s. I’ve kind of written a little story about how he deals with that, and eventually he gets over the skywalk and to Midtown and he goes on the monorail. It’s a fun little story. I’ve got to get together with somebody and illustrate it.