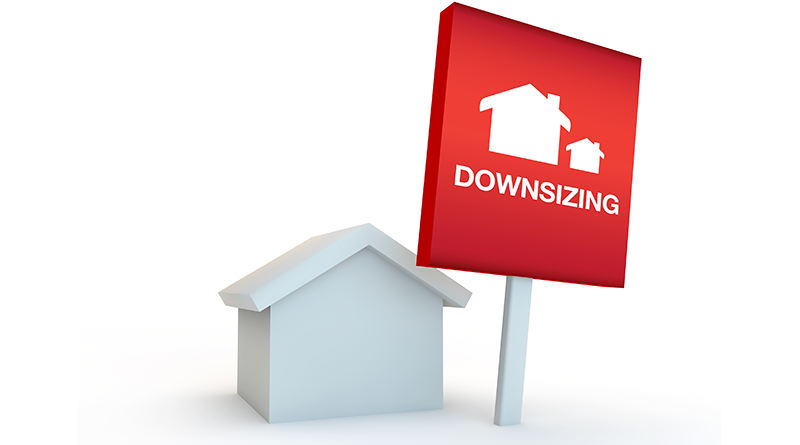 Have you noticed that we spend most of our adult lives accumulating stuff, only to reverse the process as we near the finish line of life?

I began my too-young married life in a 720-square-foot mobile home, slowly replacing its factory-furnished contents with a new plaid sofa, loveseat and waterbed; a 1940s maple drop-leaf table and chairs purchased from my mother’s friend Lucille; and an old crib borrowed from my Aunt Carol. Buying our very own washer and dryer was a thrill — no more trips to the Lima Launderama for us!

Six years and a second child later, my husband and I moved to a 1,400-square-foot house with three bedrooms, one bath, a small seasonal porch off the living room and a postage stamp yard in an older neighborhood. Better yet, it included a walk-up attic, full basement and detached garage. I was giddy with storage space — and quickly filled it with Christmas decorations, bikes and big wheels, a small assortment of gardening tools and a lawnmower. We had the basics and, for everything else, we had neighbors from whom we could borrow things (a ladder for washing windows, folding tables for parties and a buffing machine to wax the hardwood floors once a year).

Following a divorce and my subsequent remarriage, my new husband sold his house and moved into mine while we built a 2,600-square-foot house on 11 acres in Mendon. Even with our blended belongings, the new house looked pretty bare. A generous wedding gift from my in-laws allowed us to purchase a new dining room set, living room furniture, and a matching walnut bedroom set. We added drapes, pictures, wall coverings and lamps; we acquired rocking chairs for the front porch, a hammock and an armoire to house a second TV. A riding mower, new deck and patio set came five years later, followed by central A/C; it took 17 years before we finally put in a front walkway. In the meantime, I scoured garage sales and antique shops for finds and purchased accent pieces in order to update our décor.

‘Life is a cycle. We move from small house to big and bigger — and then back to small and smaller, until one day we end up in a two room apartment in assisted living (if we’re lucky) or a shared room in a nursing home (if we live long enough).’

At last, after years of striving and accumulating, it seemed that the house was perfect!

Until the furnace went kaput and the roof needed replacing and the chimney started chipping and bugs ate the bushes and the floors were too dated. Even worse, the children who had filled its rooms with noise and laughter and conflict and chaos were grown and gone. Though it was nice to finally have a study and a pristine guest bedroom, aside from family dinners and occasional parties, the house seemed way too big for just the two of us.

I began to long for a bungalow, something charming, with a small yard, say about 1,400 -square-feet, with next-door neighbors and sidewalks in an established neighborhood. Something about the size of the house we lived in 30 years ago, when we were just starting out, though without the second story.

I’m still working on my husband, though he, too, is growing weary of being a caretaker. He’s good at fixing things, but he doesn’t enjoy it. These days, he hires people to mow the lawn and treat the bugs and seal the driveway rather than doing it all himself. He worries about weeds like an old woman and frets about the rising cost of living.

We both will cry like babies when we leave the amazing home we have spent the past 30 years creating. But it is time to downsize. It’s time to let go of things that we once prized so much, freeing ourselves of the weight of so many possessions. Sifting through our stuff will be difficult, but it will offer an opportunity to relive many happy memories of times gone by. More importantly, it will save our children from having to deal with our lifetime of accumulation. I am confident that when we gift or donate the many items we no longer want or need, they will bless others.

Life is a cycle. We move from small house to big and bigger — and then back to small and smaller, until one day we end up in a two-room apartment in assisted living (if we’re lucky) or a shared room in a nursing home (if we live long enough). If we learn to be satisfied along the way, instead of constantly striving for “more” or “better” (as society tells us we must); if we hold lightly onto things, realizing their worth lasts only for a season; I believe we will grow to be more content, and therefore happier in the end.

Janet Olexy lives in Mendon with her husband, Tony. She and her twin sister Joyce were caregivers to their parents for over a decade. For the past several months, Janet (with the help of her five siblings) has sorted through, saved and/or disposed of a lifetime of her parents’ possessions, seeking to have minimal impact on the environment, help others, and honor their memory.