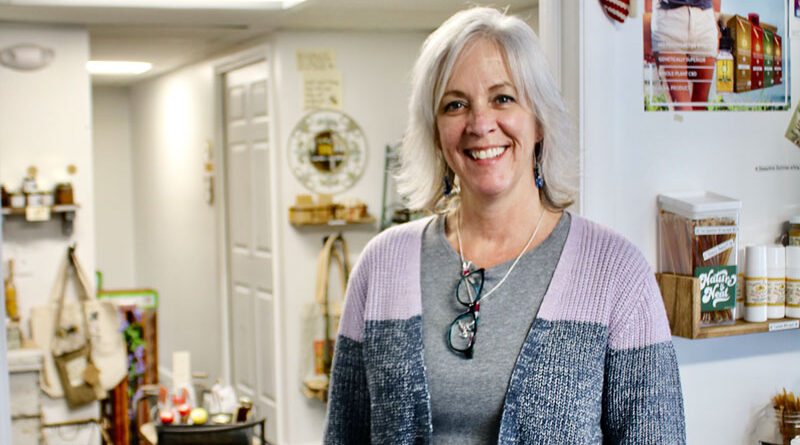 Enjoys a new career as beekeeper

So, what would you do after you’ve had a 19-year career in accounting and helped your company grow from 25 to 400 employees, raised two kids and sent them on their way, and watched your husband retire?

And after the furry creatures got comfortable with you, you’d acquire more bees and start selling the products of their labors in shows and festivals … and making money. Right?

Then would you start making crafty things with bee byproducts in your kitchen at home? Things that almost no one has seen before?

Then one day you’d catch a glimpse of a nice little house in the business district of the village of Webster, and go home and tell your husband you’d like to set up a business. What would he say?

That’s what Amy Stringer, 55, of Ontario did.

Her shop, The North Bee, on North Avenue, is built around her personality. It’s the kind of place that has such unusual stuff, you find yourself turning around and asking her questions every few feet.

“I just retired at the end of September from LSI Solutions in Victor,” she said. “It’s a medical manufacturing company. I saw a lot of exciting fun things there. The owner designed medical devices for minimally invasive surgery. I was hired as a part-time accountant. I had gone to college for two years and worked at Xerox for a few years, then I had children and stayed at home for 10 or 11 years, taking care of my kids and doing some daycare.” 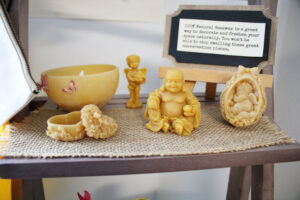 Husband Michael retired from the Webster Highway Department three years ago and is now the superintendent of the Union Cemetery in Webster. Amy and Michael have been married for 33 years. Son Adam works in Produce at the Wegmans in Perinton, and daughter Jessica is mom to two sons and designs children’s pajamas.

“My sister, Jill, about seven years ago, asked for bee books for Christmas. I asked myself, ‘What is she doing?’ Then she got a beehive in her backyard in Rochester. I thought she was crazy. The more she talked to me about the bees, it was so intriguing and interesting. Then she gave me a jar of honey, which up to that time, I wasn’t even eating honey. I was amazed at how delicious it was. We talked about bees often, and I’d ask for a jar of honey. After I did that several times, she told me, ‘I think you should get your own bees.’”

So that’s what I did. She helped me get started about six years ago.

“When I got my first hive, my husband and my daughter told me I was crazy and what was I doing? I got the bees in May. I truly enjoyed them and so did my husband. We were truly amazed each time we’d open the hive to see what the bees were doing, what they had accomplished. At the end of our first season, we couldn’t really take any honey, but we tasted a little bit every time we were in there. I did have a little bit of crushed honeycomb that was left over. I melted it down to beeswax and I made ornaments and a hard lotion bar.”

‘As soon as you see the dandelions pop, that’s the start of the honey-collecting season, in March or April.’

Her ornaments are beeswax color, but intricate, with a folk art look. The hard lotion, like a balm, is made of beeswax, coconut oil and cocoa butter. It’s applied as a natural moisturizer. Still working at LSI at the time, she found out her lotion bars were popular and started selling them in the office. “I was blown away by the response.” The beeswax allows the skin to breathe while it’s a moisture barrier.

She branched out from there, adding fragrances to the lotion bars, meeting a growing demand.

“My daughter and I went to a barn sale — the Palmyra Purple Painted Lady Barn Sale — this isn’t a barn sale. It’s so much more. I wanted to be part of this. I sent in my application and I was in it the next year. I had no idea what I was going to do for it, but I did it in 2016. The amount of money I made in just one day! People came up to me and said, ‘I can’t believe you did all this stuff with just beeswax — they were truly appreciative and so intrigued by what I was doing – that was such a WOW!”

That festival lit the flame under Stringer, she says, and the possibility of having her own business solidified. She went to Village Gate Square on second Saturdays and the success continued. “I was amazed at the amount of money I made and the interactions I had with people talking about my bees and products. I did that for two years.”

But she also realized, “This is a lot of hard work.”

Then she saw the little house on North. “I thought, wouldn’t it be nice if I had a place to sell my stuff, make my products in back, and have a room for the children?”

Wait a minute, what children?

It turns out Stringer was asked by her grandson’s Rochester Yoga Preschool teacher to come and talk with the kids about bees. “I brought some things and talked to the children about bees. That was just so special. I really liked interacting with children. They smelled the beeswax, tasted the honey, saw my little bee puppet…I had a lot of tactile stuff for the kids.”

Not long after, she saw the house on North Avenue. “I talked to my husband and said, ‘Guess what? I found a place. I want to go look at it.’

“He said, ‘Does that mean we get to take all this stuff out of the house?’”

The North Bee has a special kids’ room where parents can park their children while shopping. Stringer loves to instruct, and here she shares items with kids.

In the back of the store is the prep area where she makes products and melts wax. 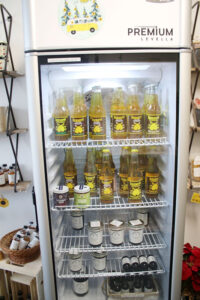 “As soon as you see the dandelions pop, that’s the start of the honey-collecting season, in March or April. I collect honey very often in the beginning, always keeping in mind the bees need 80 pounds of honey for themselves in wintertime. I take honey off summer and fall — in the summer, end of July I pull. Prior to that I’m checking on the bees to make sure there’s a queen and the queen is laying eggs. Making sure there’s extra room. When they have extra honey, I will pull that end of July and again around Labor Day, depending on the weather. I can pull 100 pounds of honey off a hive. We don’t do it all at once.”

She sells honey in 8-ounce and one-pound jars in two versions — “summer (clover and wildflowers)” and “fall (goldenrod and aster).” Summer honey is sweeter and lighter; fall is darker and more flavorful.

“When someone comes into my store, I say, ‘Hi! Have you been here before?” If they say, ‘No,’ I tell them I’m a beekeeper and all the products in my store are made out of local beeswax (except for candles, which use wax supplied by other beekeepers).

The shop isn’t big but has a lot to offer. Stringer sells flower seeds, candles, candy, honey sticks (straws), elderberry syrup (which some people believe has anti-inflammatory properties) and jelly, propolis (which some use as an antiseptic or germ-killer), paw balm for dogs (“A big seller,” Stringer says), lip balm, foot nourishment stick for cracked heels, potpurri suncatchers and things to drink. She also handles hemp and CBD products.

COVID-19 closed the shop for 87 days in 2020, but when she retired from LSI and opened for the holiday season, she found herself working 15-hour days. “I was blown away,” she said, “with all the new customers.” She is an Etsy artisan and her website, www.thenorthbeeshop.com, also offers products. “They both took off when my store was closed,” she adds, “but I really missed being here and seeing customers.”

Photo: Amy Stringer, 55, of Ontario, quit her job as an accountant for a Victor firm to open her business, The North Bee in Webster. “I have a joy doing this,” she says.