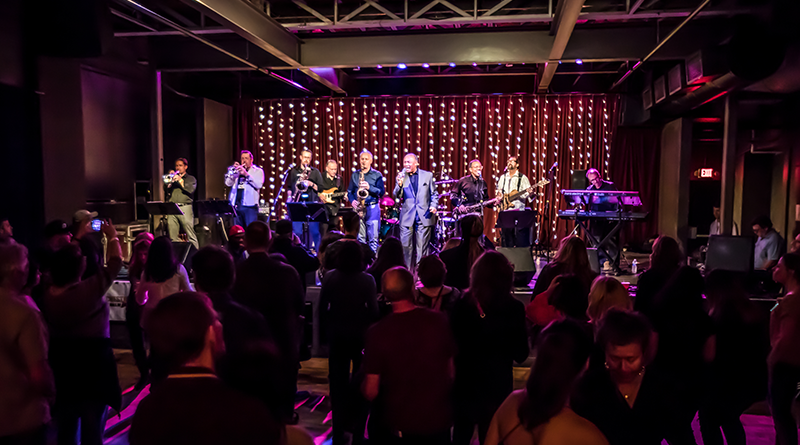 For almost 23 years, Prime Time Funk, a Rochester-based band, has been entertaining others and having fun doing it, earning a multitude of loyal fans and professional renown in the process.

The 10-piece band’s members range in age from late 40s to 70; their audiences are generally of “a certain age” as well — though by this point, the band is onto its second generation of fans.

The late Ralph Ortiz and saxophone player/vocalist/songwriter Jim Richmond, now 65, founded the band around 1996 with multiple intentions: to launch a project for themselves, to create demand for a larger, horn-driven band, and to do it with the very best musicians, who were also nice people. Ortiz died in 2009.

“We wanted the band to be an attraction — for there to be lines out the doors, so we didn’t play at every bar, every weekend,” noted Richmond. “We also wanted to work with gentlemen; good guys. People you could look across the stage at through the years, and still smile.”

The group, which among other highlights has become the house band for the Rochester Music Hall of Fame, lists backing up a stellar selection of musicians — such as Maceo Parker, Paul Shaffer and Paul Simon — at RMHF events as one of its points of pride.

They play the Rochester International Jazz Festival. They began composing their own songs, and have released two CDs filled with originals and selections from their huge repertoire. They continue to play bars, casinos and festivals, as well as private events. Their local “home base” is Lovin’ Cup Bistro & Brews, in the Rochester Institute of Technology area.

They started out at the now-defunct venue, Milestones, with an approximately six-week, audience-building gig. They recently hosted their 22nd anniversary celebration at Lovin’ Cup — among both new and familiar faces.

Chuck Pullara, 60, has been a fan practically since the very first gig. “I’ve known a lot of the guys in Prime Time Funk for years and years,” he said. “Being a fan of their band is a natural extension of that friendship.”

PTF was founded with the notion of emulating the style of legendary horn-based group Tower of Power, then adding its own influences and song selections. A large part of Prime Time Funk’s appeal across generations and genres lies in its versatility and breadth of experience, lending itself to engaging interpretations of a wide-ranging repertoire. A sample of artists in its repertoire includes Duke Ellington, Bruce Hornsby, Elton John, Bob Marley, Frank Sinatra, The Temptations and Stevie Wonder.

Dave Cohen, 64, was one of the “talented musicians, gentlemen and nice guys” that Richmond and Ortiz recruited all those years ago, and one of the few remaining original members, along with Vince Ercolamento on the tenor/alto/soprano saxophones and flute.

With its range of experience and instrumentation possibilities, the band gladly tailors set lists to fit the mood or venue. At weddings and private events, for example, they can provide jazz and standards during dinner, and then get the party going with Motown, rhythm and blues or a few top-40 hits.

Pullara knows their repertoire well. “Believe it or not, some of my favorite songs are their originals,” he said. “They also do great covers — I love when they do Steely Dan’s ‘Peg.’ Their talented members have so much musical depth; they can really explore the songs.”

“We’re not as concerned with staying current,” noted Cohen. “People are familiar with most of the music we play.”

At public and outdoor shows, said Richmond, the audiences include “black, white — middle-aged and younger kids, people our age, long-haired hippies, and elderly people in wheelchairs. We try to not leave anyone out.”

As the band and their fans have gotten older, some things have naturally changed. Where gigs used to begin at 10 and go until the late hours, they now usually start by 8 and end before midnight.

“Keeping a band this large together and being in the music business can have frustrating aspects,” said Cohen. “But we love each other and feel like family; we have each other’s backs. And it’s worth it to get on stage and play music.”

“When I saw them backing Paul Simon at the Hall of Fame, it sent chills down my spine,” recollected Pullara. “They were looking at each other, smiling and laughing, just having the time of their lives.”

Richmond notes that one of the original goals was to make Prime Time Funk gigs a serious draw. And, he can attest to achieving that: “At our 22nd anniversary gig, there were lines out the door!”

Visit primetimefunk.com or Prime Time Funk on Facebook to learn more and for the band’s schedule.