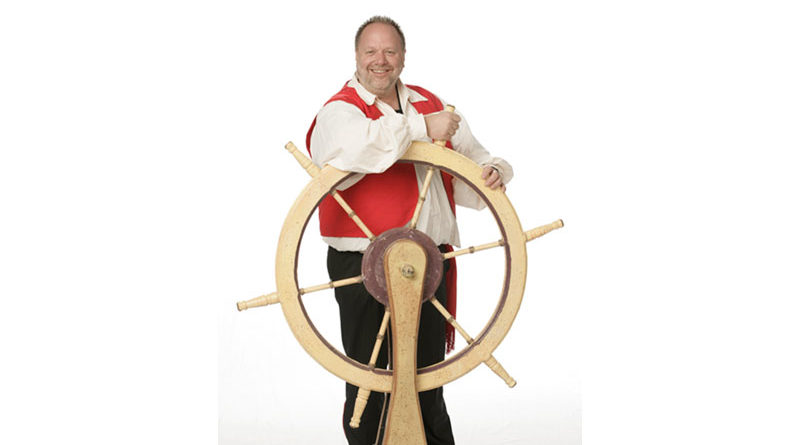 Some might find it unusual that a man who entertained thousands of children as a singing pirate and won multiple awards for his music videos never took a piano lesson or sang in his school chorus.

But, then again, Gary the Happy Pirate has never led a typical life.

“There were a lot of times I was living meal to meal —but I never remember being scared that I wouldn’t make it,” said the 60-year-old father of six and grandfather to 13.

Gary Smith said he grew up as “just a regular kid” in Hilton. At age 18, he graduated from high school but had no plans to go to college. He was working in a floral shop with his mother. Then, he asked a friend to teach him how to play the guitar and his life took a complete turn.

Besides guitar, he picked up playing the keyboard by ear and ended up the lead singer of a Christian rock band called “Stronghold.”

“As long as we had money to eat and get to the next gig, we were doing OK,” reminisced Smith.

Over the next three years, he toured the country in a Chevy van, married his youth group sweetheart and future songwriter, and put out an album.

Smith is proud of his singing on “Fortress Rock”, which is still ranked #382 of the 500 Best Christian Rock Albums. CCM Magazine’s review stated, “Stronghold was Christian music’s answer to Black Sabbath without the Ozzyfied vocals.”

“That was a great time. Music took over my life and I got to marry my best friend,“ said Smith.

He also felt a calling to the Christian ministry. When the band broke up, Smith moved away from the heavy metal sound, settled down, and took a job with his church. As worship leader, he quickly learned that playing his guitar helped engage kids in the congregation. He started writing songs for them and establishing skills that eventually translated to his future career as a children’s entertainer.

“He was realizing what a terrific reaction he could get from kids just through a song,” said Bob Marini, a church member and album producer. “When he came to me for help arranging his first album, I was blown away by his material. We had so much fun with it. I signed on for the long haul.”

Smith’s first secular gig came on “Dad’s Day” at his daughter’s pre-school. He asked a fellow church member, Doug Ladd, to join him. The two were friends and worked together at Colorgraphics in Greece.

“Since Doug played guitar too, I asked him to come,” said Smith. “Dads were supposed to tell the class about their jobs, but I knew little kids would get bored hearing about photo production. So, Doug and I made up a few songs and we were a big hit.”

Word spread quickly to other teachers about the amazing duo, “Doug and Gary.” No marketing was necessary. Within a year, the pair had performed 367 shows at churches, schools and birthday parties for free or for free-will offerings.

In 1989, Ladd and Smith continued to work full-time at Colorgraphics during the day and collaborate on new children’s songs at night. Kathryn, Gary’s wife, would often supply the lyrics based on real-life experiences from her role as an at-home mom. When the kids did not eat their vegetables or want to brush their teeth, she would write a song.

Ladd remembers coming over to the Smith household for a song-writing session in 1990. The kids were being a bit rambunctious, so Kathryn got up to make them some popcorn. According to Ladd, as soon as the kernels started exploding, so did the duo’s most requested song, “Popcorn!”

“It just came together. ‘Pop, pop, pop, pop-corn … Eat it hot or eat it cold’ … the words were simple, and the melody was so catchy,” said Ladd. “Then, we told the kids to pretend they were a kernel and jump up to pop — that’s when the dance moves came to be.”  Many of their songs were from collaboration, but Kathryn gets credit for writing lyrics for 75 original songs.

On one of her first songs, “I’m a Happy Pirate”, she gets credit for the music as well.

“I had one of those small, toy pianos in front of me. There’s only one octave of notes. Gary wanted a song about a pirate, so I started banging it out. The entire song is just one octave,“ said Kathryn.

They started selling cassettes and VHS tapes that helped both men support their families through entertainment.

This all led to an invitation by the Bush Administration to perform in the Rose Garden during the Easter Egg Roll event in the spring of 1992.

The next year, a second invitation came but the venue had changed. The Clinton administration wanted Doug and Gary to perform on the Washington Mall to an even larger crowd. Other highlights included performing at the opening of the Mall of America and Billboard Magazine listing Doug & Gary among the country’s top children’s entertainers.

“Gary and I just clicked. He will always be a part of my life forever,” said Ladd. “We both had the same spiritual goals and wanted to elevate children’s lives through song. We worked hard and accomplished a lot in a short period of time.”

The pair produced four albums and won two Parent’s Choice Awards. Yet, by 1993, Ladd was ready to move in a different direction. He wanted to go into teaching.  Smith wanted to continue, solo, as “Gary the Happy Pirate.”

Smith developed a weekly television show for WUHF and added a puppet sidekick named YoHo, which was first voiced by Kathryn. The show was recognized with two New York State Broadcasters Awards for “Best Children’s Series”.

“What really impressed me was how immensely talented Gary was to come up with the musical support for what Kathryn had written. Those two really had a ‘Rodgers and Hammerstein’ thing going and it worked so well,” commented Marini.

Even with all the success and national accolades coming in, Smith never stopped focusing on ways to reach out to children in Rochester. He would often perform at the Golisano Children’s Hospital and was concerned because many of the sick children had no toys.

He remembered how the late Rochester TV broadcaster Eddie Meath created a penny fund to raise money to help the community. Smith used the same concept to develop the Pirate Toy Fund.

At first, he personally collected toys and handed them out to children admitted to Rochester hospitals. As more friends and volunteers joined the crusade, Smith decided to incorporate the Pirate Toy Fund as a 501(c)(3) charity. A board of directors was established and the organization expanded so that agencies that provide services to children in need could apply to receive toys.

“It’s amazing what Gary has been able to do for the community — first as an entertainer and then as the founder of the Pirate Toy Fund,” said Otto Harnishfeger, PTF board president.  “Everywhere he goes, people of all ages come up to him and either sing one of his songs or thank him for the toy they received when they were in a hospital.  He’s touched so many lives along the way,” Harnishfeger said.

In 2017, Smith stopped performing regularly and handed the rights to his songs over to “The Happy Pirates” who continue to offer community concerts.  During the Pirate Toy Fund’s 25-year existence, the charity has distributed 250,000 toys through more than 75 community agencies.

In March, Smith announced plans to retire at the end of May, but that turned into mid-June because of the coronavirus situation. He remains on the PTF board and is helping with the transition to the new executive director.

Harnishfeger started in that role on June 15.

“It makes total sense to have Otto continue the mission,” remarked Smith. He is one of the hardest working volunteers we have. I’m sure he’s the best person to bring smiles to the faces of children — one toy at a time.”

— Rebecca Leclair is a long-time PTF board member.  Since 2000, she has served as Gary the Happy Pirate’s sidekick during the annual weeklong toy drive held in December. This year’s goal is 25,000 toys in honor of the organization’s 25th anniversary.