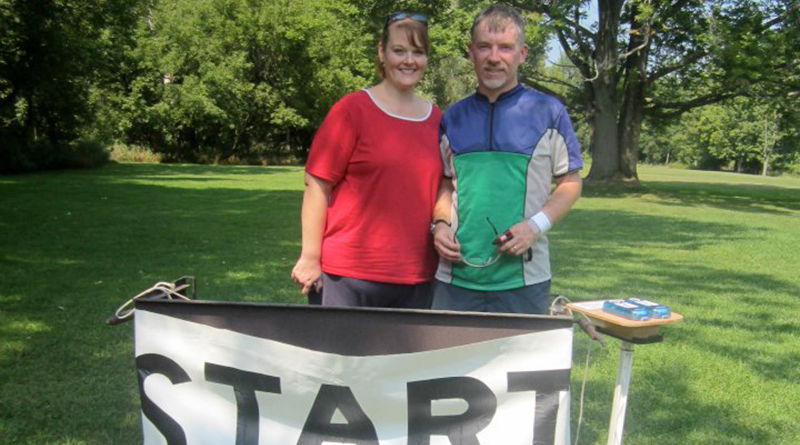 To Don Winslow, 52, orienteering is not just a walk in the woods. The Marion resident is a member of Rochester Orienteering Club. The group travels to various sites in Monroe County, plus places like Letchworth State Park and Sodus, to engage in a hobby that’s gaining traction in the region.

Although multi-generational — the group has members ranging from children to someone 90 years old — about one-third to one-half of the 100 members are older than 65.

That’s just what orienteering is all about. Participants use orienteering-style maps that offer enhanced topographical features to help them navigate from their starting point to a designated destination.

“The same type of map is used all over the world,” Winslow said.

The group meets twice a month from April through October and monthly the rest of the year. Most of the time, they go out on foot, but occasionally cross-country ski, ride mountain bikes or paddle canoes and kayaks. They’ve also done orienteering at night with headlamps.

Winslow insists orienteering is easy for anyone to learn.

“We start kids out as young as 3,” he said. “They just follow a string through the woods. They collect stickers at each checkpoint, called a control point. There’s an orienteering flag there, orange and white.

“We have kids and families that come out. It’s not competitive, but just a challenge. The length of the course starts to increase as they get older. Then they start to decrease as people get older.”

He views orienteering as a good way to unplug, get in the woods and exercise both body and brain. While a younger person may relish tackling a challenging terrain, an older person may want to use strategy to find a way around the rough spot.

“There are easier and harder courses and everything in between,” Winslow said.

He has always loved maps and joked that when his wife, Cheri, pulls out a novel, he reads maps.

When Winslow was younger, he used to participate in cross-country running. While he may not attack an orienteering activity at a dead  run, he does enjoy the physical activity it provides.

It’s kept Winslow active since he started in 2006 at age 40. Since his work as a special education teacher at Lyons Middle School isn’t physical, orienteering helps keep him in better shape. Occasionally, wife Cheri joins him. She substitute teaches part-time at East Palmyra Christian School.

Unlike geocaching, which relies upon GPS technology to find a token “treasure,” orienteering is old school in its navigation and offers no prizes. The participants must employ their sense of direction, map reading abilities and decision making skills to efficiently complete the course and find the control flags. Most are two to three feet in the air, so by mid-summer, they’re harder to see than in early spring.

Newcomers are welcome to club meetings to learn about orienteering and try out the activity.

“We’re more than happy to teach,” Winslow said. “We always have instruction before we send anyone out.”

He urges newbies not to give up.

“Keep problem solving and if you get lost orienteering, go back to the same spot where you knew where you were to re-orient yourself on the map,” Winslow said.

The club charges a membership fee of $15 per year for an individual and $20 for a family. The beginner rate is $5 per course.