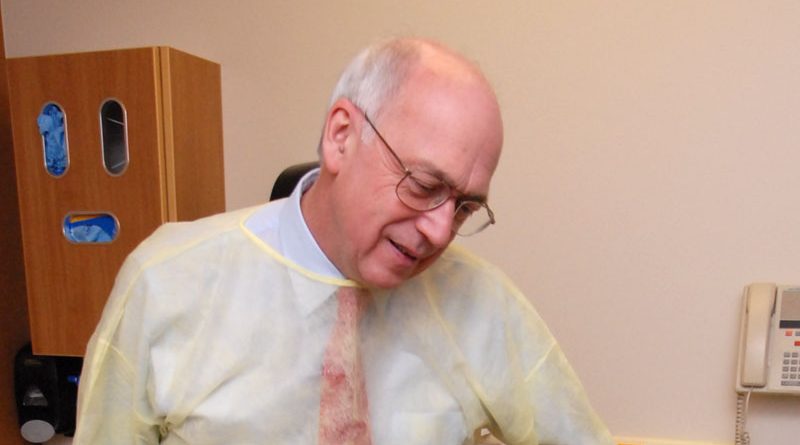 On the contrary, Calnon works 32 hours a week at his private dental office in Chili Center.

Many of his patients have been with him for 20 to 35 years, some of whom drive long distances.

“It’s more than going to the dentist; it’s seeing friends. We’ve come to know about our patients’ kids, and their grandkids,” Calnon says. “At our office, we have longer cleaning appointments. It’s never been about how quickly patients can be seen. We like to spend the extra time to educate our patients as well as get to know them.”

Sue Groh has been his patient for 35 years.

“He is an awesome dentist and a fantastic human being. He sets the tone for the entire office. When my husband was ill and had severe problems with his teeth, Dr. Calnon met him on Christmas Eve to provide urgent treatment so my husband could enjoy the holiday meal. That’s the kind of person he is and there aren’t many like him around,” Groh said.

Calnon said the best thing about a profession like dentistry is that you can stay involved. He says you can be in a position where you can make an impact in many ways, like advocating for change through policy changes or legislation or trying to figure out ways to improve access to care for underserved people and enhancing education.

“There are so many things you can do and there’s a myriad of ways to staying involved,” he says. “It’s all important and very fulfilling.”

‘Never been a job’

Making a difference locally is dear to his heart. He’s served on the Eastman Dental Center Foundation Board for 12 years, the last nine as president. “I want to be a part of continuing the wonderful legacy that George Eastman left to Eastman Dental, and to ultimately support the mission of Eastman Institute for Oral Health which is to provide education, research and community outreach.

“It comes down to the fact that dentistry to me has never been a job. It’s a profession and a profession becomes a lifestyle. And you don’t forsake that lifestyle. You can modify and slow down, but it becomes a way of life and a culture you just find yourself in. Bottom line is that I love it. Why would you walk away from something you love doing?”

Throughout his career, his impact has also reached the younger generation.

“I love to mentor new dentists. It’s very fulfilling when someone approaches me at a national meeting and tells me how something I said 10 years ago impacted them so much that they chose this field. It’s those intangibles and the lasting impact on others’ lives that fulfills me the most,” he noted.

One might say he mentored his two sons, both of whom have become dentists.

Calnon originally set his sights on landscape architecture and graduated from college focusing on environmental science and forestry before becoming intrigued with dentistry.

He loves tending to his lawn and he is in the process of redesigning parts of his Spencerport property to make it more maintenance-free.

He also bought a new bicycle this year and is biking frequently on the canal. He is also trying to get back into golf, which is something his young grandchildren enjoy as well. He loves to cook and experiment with new dishes, and he and his wife Mary Kay love to entertain.