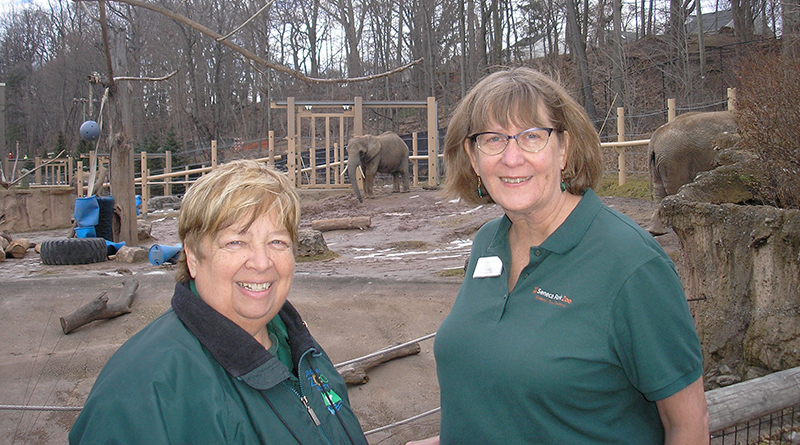 For these retirees, the zoo never lost its fun

After about 12 years as a Seneca Park Zoo docent, Jan Barney is ready for more.

“I’ve always been interested in learning,” says the 70-year-old retired teacher. “This is a great way to constantly expand my own knowledge, but also convey it to other people, and I like that.”

Located in Monroe County’s Seneca Park in the northeast quadrant of Rochester, the Seneca Park Zoo is home to 389 animals from 101 species.

Folks come from near and far to visit with and learn about tigers, bald eagles, elephants, frogs and even insects. While opening its doors to visitors, who are called “guests,” the zoo also engages in extensive conservation efforts, helping to protect animals from extinction and preserve their habitats.

Though it has full- and part-time paid employees, the zoo couldn’t function without the 483 members of the Seneca Park Zoo Society who volunteer for it. The society partners with Monroe County to run the place. Of that number, 86 are docents.

“The docents are a really special group of people who really enjoy speaking to the public, and helping people learn while they’re here,” says Pamela Reed Sanchez, president and CEO of the Seneca Park Zoo Society.

Docents are extensively trained — this year, new volunteers will have to train for one day a week for five weeks. They also have to take four additional credit hours of continuing education courses annually.

The training is designed to give docents the knowledge and skills they need to help the zoo’s guests learn about its animals and the challenges they face in the wild. The volunteers also present the ways in which the zoo and the many nonprofits it supports try to reduce those challenges, and the steps that guests might take to help the animals. Docents have to volunteer for at least five hours a month.

“They take their training and their love of animals and their love for the public, and they turn it into creating a fantastic guest experience,” Reed Sanchez explains.

Susan Herzberg spent 22 years with the Rochester Institute of Technology before retiring as an academic adviser in the B. Thomas Golisano College of Computing and Information Sciences. Since 2013, the married mother of two grown children has regularly volunteered for the zoo, where she put in about 200 hours there last year alone as a docent.

“It’s a place where I feel like I just smile all the time,” says the Webster resident, who turned 67 on April 11.
Guests can especially bring out that feeling.

“It’s fun to interact with them,” Herzberg explains. “Seeing that little spark, that something you might have said that will give a person that sort of new nugget of knowledge, whether they’re young or an adult.”

“We really had lost that population in this area, but then through conservation efforts and pollution control, the population is on the increase,” she explains. “They are now facing a new threat — lead poisoning from bullets and fishing tackle.”

Birds of prey can ingest lead bullets or shot when they feed upon the bodies of prey that were hit by hunters, whether the animals survived or perished, Lead fishing sinkers are another source of the metal.

In addition to working with guests, Herzberg chairs the biofacts committee, which is in charge of the close to 1,000 items that the zoo’s docents and interpretative staff use to help guests learn about animals. She is leading the reorganization of the collection, which includes part of a tiger’s pelt.

“Guests can have an experience of seeing what a tiger’s fur feels like,” she explains.

Though she worked full-time at Hope Hall School, a private nonprofit that serves children with special needs, Jan Barney used to come to the zoo many Saturdays with her two kids. They grew out of it, but she didn’t. Barney became a docent back in 2006 while still on the job.

“This is a relaxing place after a week of teaching and dealing with discipline,” the Greece resident explains.

Now that she’s retired, the mother of two, grandmother of another two and great-grandmother of one typically spends 300 hours a year volunteering for the zoo. Barney particularly enjoys learning, and helping others learn, about the newest animals to call the place home. Back in 2016, she spent quite a bit of time observing two new arrivals, the gray wolves Timber and Willow.

“I came almost every day to watch as they became acclimated,” Barney says.

Barney is also a past chair and vice chair of the zoo’s education committee, which creates and runs the docent training program. She’s looking forward to welcoming the Seneca Park Zoo’s next additions.

“I’ll be real excited when the red pandas come,” she said.

The pandas’ exhibit is projected to open in late spring.