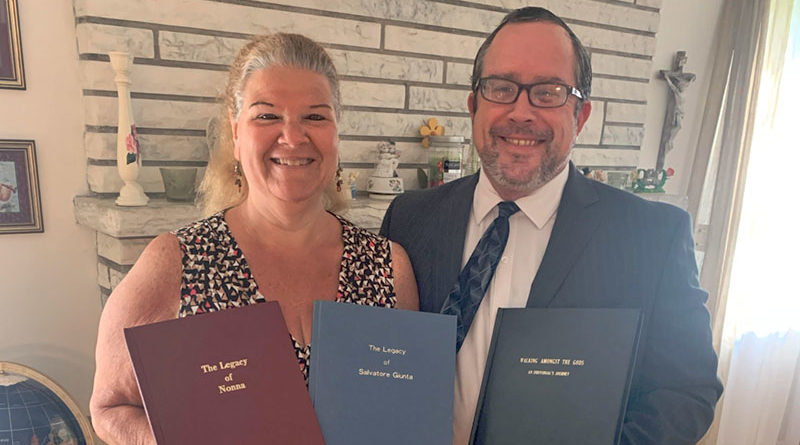 “Respect your elders” — most people use this phrase to remind younger generations to be kind and considerate of older community members.

But for Nicholas Salvatore Gatto, founder of Legacies of Life, LLC, “respect your elders” is not just about how we should behave. It’s about understanding that seniors are a valuable source of wisdom and preserving their stories is an important pursuit.

Gatto, 52, of Gates is a native of Rochester. Gatto graduated from Nazareth College in 1989 as a trained geriatric social worker. He is currently a case manager at Seabury Woods of The Episcopal Senior Life Communities. He founded Legacies of Life in 1994 after completing a 500-page book about his own life for his daughters.

“It was a good literary workout,” he said.

After this “workout” he knew that he wanted to help others preserve their own stories, too.

Ann Marie Cook is president and CEO of Lifespan and has known Gatto for 20 years. She believes that his skills as a social worker really helps him relate well to people as he interviews them for their own legacy books.

“I think his background and training lends perfectly to this type of work. We have a lot of social workers here, and what I noticed is they all have sort of the same qualities. They’re great listeners, they really try to listen to the client and what their client wants and needs. Nick possesses that skill of just being a great listener.”

Gatto uses his listening skills to assist clients who want a book about their life. After a series of interviews that can take a few weeks to a few months depending on the situation, he writes a first-person narrative of the client’s life. It includes stories about themselves and their ancestors as well as bits of wisdom and advice for the people they love.

“The main thing with Legacies of Life is sharing the story behind the story; why they’re doing the things they’re doing, their philosophies, what keeps them going, what they learned from their parents and grandparents,” Gatto said about these legacy books.

“The main thing with Legacies of Life is sharing the story behind the story; why people are doing the things they’re doing, their philosophies, what keeps them going, what they learned from their parents and grandparents.”

“I guide them on their journey,” he continued. “Usually beginning from their formative years, growing up years, education, young adulthood, marriage, military and different life events.”

He can also include family photos and even poetry or other creative writing the client may have written themselves.

The final product is beautifully bound by Thomas Pinzon of New Ridge Bookbindery in Penfield. Finally, he gives the client a digital copy of the book so they can add to it in the coming years if they choose. He offers eight different book packages. The smallest packages start at $300. Bigger packages or books that require more interview time are more expensive, up to $3,350 for the “platinum legacy” package. Gatto has now done over 60 books.

Anyone can employ Gatto to create a legacy book, but his primary clientele are older people and those at the end of life in hospice or palliative care.

“Life is much too short and, especially for those who have been diagnosed with a terminal illness, the ability to share their life experiences is especially important,” he said.

“You know, unfortunately, some people that he wrote books for passed away before they could actually get the finished product. I remember one in particular. I went with him to a funeral and he handed the family the book at the funeral home, and the family was just so excited and thanked him over and over because they have something to remember their loved one by.”

Cook agreed that his work has impacted so many of his clients whether they were at the end of life or not.

“I have to say his work has really changed not only the client, but their families. You know, from what I have seen, so many families didn’t know the background of their older loved one. They didn’t know the stories, all of the things that they have gone through, and it’s made such a difference at the end of their life in so many ways. Sharing those stories, reminiscing and the positive impact it makes not only to the older adult, but to the family, is incredible. Nick has provided that gift.”

Gatto enjoys meeting people and learning from them.

He once interviewed a holocaust survivor who shared her story of her life in a concentration camp. He is also fluent in Spanish and Italian, so he is able to speak with clients in those languages if they prefer. Family members, like adult children and grandchildren, are invited to be a part of the interview process. He recalled interviewing a gentleman whose wife of 70 years had tales of her own to add to her husband’s interview.

“One life is like the other person’s life — they’re integrated. You can’t separate them out and their life story is the same but each with different parts.”

Gatto noted that the success of his business is due in large part to his supportive and loving family. In 1995, after a year of creating legacy books, he was considering stopping as he hadn’t had the success he had hoped. But Linda gently pushed him to keep at it.

“She said, ‘No way, you got to keep on going.’ So, I’ve been using her as a sounding board for the past 20 years. And that’s how it is a family company because she provides insights and guidance. She is my partner, side by side, providing insight and counsel.”

Linda appreciates Nick’s dedication to his work and is happy to help him in any way she can. Their daughters, Julianna and Danielle, are always ready to assist as well.

In addition to his own legacy book Gatto has also written books for others in his family including Linda’s mother who turned 93 earlier this summer.

One of the most rewarding aspects of the job is helping older clients understand that while they feel like they have lost so much — eyesight, physical health, hearing, and so on — that they really have gained quite a bit of love and history over the years.

“They don’t know how much that they actually gained or how much they have actually done. By talking to them, they’re able to verbalize what they’ve done.”

Gatto donates a portion of his income from Legacies of Life to assist families who live in poverty as well as to organizations who help homeless animals. He is also working toward creating a legacies program for those with low or fixed incomes.

To learn more about Legacies of Life, LLC contact Nicholas Gatto at 585-247-6802 or legaciesoflife1@frontiernet.net.

Photo: Nicholas Salvatore Gatto founded Legacies of Life, LLC. in 1994 after completing a 500-page book about his own life for his daughters. He now helps others write their stories. He is shown with his wife Linda Gatto.