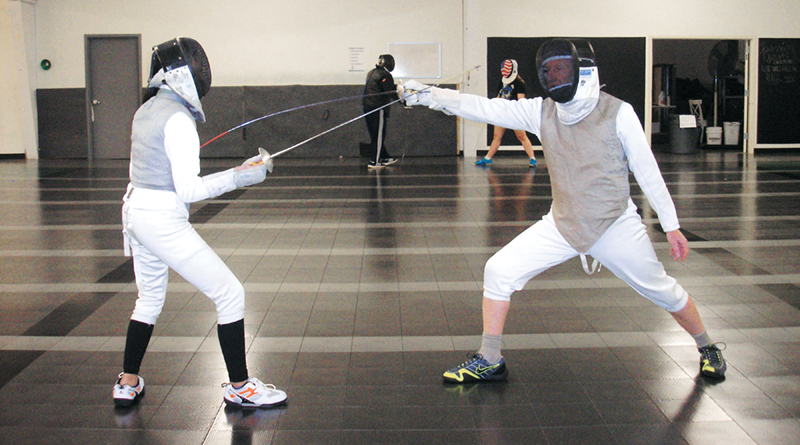 Fencing all the rage in Rochester

A sport with its origins in combat training might help you stay physically healthy and mentally sharp.

Fencing originated from the development of swordsmanship for duels and self-defense. The sport requires split-second decision-making, stamina, agility, flexibility and skill.

In order to score points, a fencer must be able to effectively attack an opponent while gauging and defending against attacks. Matches take place in an area that is sometimes referred to as the “strip.”

“You’re playing advanced chess in your mind while you’re racing up and down the strip, trying to keep in balance and keep parrying his (your opponent’s) blade,” says veteran fencer Steven Sussman, 71. “I don’t think there’s any other sport that requires that level of aerobics, balance and mental agility.”

Fencers can take to the strip with a foil, the heavier épée or the saber. None of them are made to actually harm an opponent, and those who fence wear heavy protective clothing, mesh masks and a sort of jacket called a “lamé.”

The lamé is designed to electronically detect the touch of a blade, indicating that the fencer’s opponent has scored a point.

The United States Fencing Association is the national governing body for the sport in the United States. There are local, state, national and international tournaments. Fencers can compete in teams or individually, but all matches involve single combat.

“You have a competitor, and you’re both trying to do the sport properly and get better, and see who wins the bout,” Sussman says. “It is fun, but you’re not just doing it for fun.”

You can start fencing at a young age. Semion Kiriakidi first picked up the foil at the age of 10.

“Fencing was one of the major sports in my hometown,” the Russian-born 55-year-old says, in the accent of his homeland.

Kiriakidi continued fencing until medical school but his medical practice prevented him from doing so — he was a surgeon in Russia for 20 years. He took up the sport again in 2003, after moving to Rochester to work as a researcher for the University of Rochester Medical Center.

“It was a rejuvenating moment for me, both physically and emotionally,” Kiriakidi explains.

Since then, Kiriakidi has advanced within his sport. When he and his wife moved to Wilkes Barre, Pa., so she could enter a medical residency, he began fencing professionally and founded his own fencing school. There, he teaches the use of a foil, épée or saber.

Kiriakidi moved back to the Rochester area in 2011, and began working as a fencing coach. Last August, he founded his own school in Greece, Ludus Fencing Studios. Though the demands of his business prevent him from competing in tournaments, Kiriakidi continues to espouse the health benefits of taking on an opponent.

“It’s exciting, and because of this fighting component, the intensity of physical activity, the adrenaline rush you have during fighting, it makes you burn much more energy,” he says. “Probably, during 10 minutes of actual fencing, the actual energy you burn is equal to an hour to an hour-and-a-half on an exercise machine.”

A coach’s suggestion led Sussman to pick up a foil. During his first year at Stuyvesant High School in New York City, the Brooklyn native sought to join the football team. The school’s football coach encouraged him to join Stuyvesant’s fencing team. Back then, some New York City schools had such teams.

All new fencers had to learn the rudiments of the sport. Sussman spent about two months exercising and learning the footwork required for proper fencing before picking up a foil. When he did, it was nothing like being one of the Three Musketeers.

Sussman fenced with his high school and college teams, and then with a club in Washington, D.C., before his job prevented him from continuing. He picked it up again at the age of 65, joined the Rochester Fencing Club, and is once again competing. Last December, the retired industrial automation executive headed to Cincinnati, Ohio, for a national USFA tournament, where he came in 11th of 22 fencers in his age bracket. He missed coming in seventh by one touch.

Though Sussman is an avid bicyclist, he credits fencing for helping him stay in good physical shape as well as mentally sharp.

“I think fencing is really good, as you age, for the brain,” he says. “It definitely builds brain synapses, keeps the brain going.”

There is some research to support the view that sports like fencing can help practitioners stave off some of the effects of aging. A 2012 study by Italian researchers found that fencing was associated with the improvement of some of the cognitive functions that naturally decline with aging, such as the abilities to pay attention and to process information.

Fencing might also help older adults deal with the isolation that can sometimes come with advancing years.

“As you get older, you’re trying to find other groups to be with,” says Iris Zimmerman of the Rochester Fencing Club. “You have a great community here that isn’t just a community of adults, but it’s also children that you can fence with, learn from, and teach.”

Zimmerman is co-owner of the Rochester Fencing Club and its president. She competed in the 2000 Olympics on the U.S. Olympic Fencing Team, and was an alternate for the 2004 team.

For Sussman, fencing provides much more in the way of benefits.

“If you want to stay young forever, try fencing,” he says. “Or at least, you may die with a sword in your hand.”