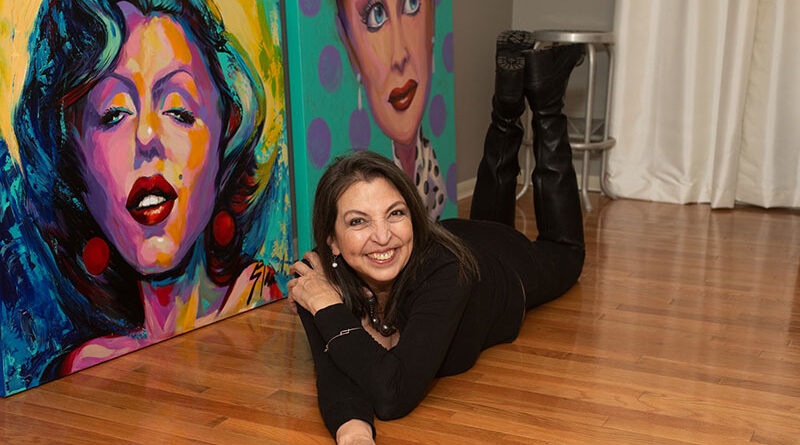 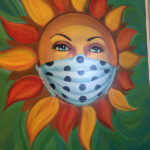 When guests walk into Lorraine Staunch’s art gallery and studio one of the first things they encounter is a giant portrait of a cat wearing glasses.

“Whenever people come into my gallery-studio, they have a certain smile that comes across their face. I have a three-foot by four-foot painting of a beautiful angora cat and it has cat-eye glasses from the ‘50s on it. They immediately break out into a smile, because that cat has an attitude and that cat has cat-eye glasses! It is for no reason other than to make someone smile,” Staunch said.

This cat with an attitude is just one example of Staunch’s “Positive Art: Art That Makes You Smile.”

Positive art to inspire and uplift

Staunch, 62, sold her first painting to a non-family member in 1970. But her artistic dreams didn’t end with a child’s crayons and watercolor set. She left the snowy Northeast Kingdom of Vermont where she grew up to attend the prestigious Ringling School of Art and Design in Sarasota, Florida. Staunch graduated with a degree in fine art then moved to North Carolina to work as an illustrator. In the late 1990s she moved to the Rochester area and is now settled in Fairport.

When she first came to Rochester, she started her own business specializing in illustration and faux finishes in the home market. But about five years ago, the interest in faux finishes waned.

Staunch decided that it was time to get back to her first love. 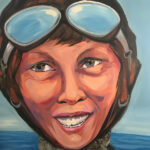 “I had to reinvent my business, which was art, it was always art,” said Staunch. “So, then I’m like, ‘You know what? I’ve got to get back to what I love to do,’ which is fine art, commissions, caricatures.”

Today she works mostly in acrylic and her murals, portraits and fine art pieces can be seen all around the area in coffee shops, dental offices, restaurants, schools and homes. She particularly excels in large three-foot by four-foot “larger than life” painted caricature portraits. But these aren’t the hastily drawn caricatures one can buy at the boardwalk. These are carefully crafted, highly detailed, full-color paintings suitable for any art gallery as well as business or home display. Several of her latest pieces can be seen at Comedy @ The Carlson and Edibles Restaurant.

“A lot of these women have pushed the boundaries of whatever profession they were in,” Staunch said. “They have achieved greatness but underneath their spirit, their positive attitude has made all the difference.”

Staunch is drawn to positivity in her subjects because she herself is such a positive, cheerful person who lives and works primarily to spread happiness to those around her.

“I believe that we all have a contribution to our society, to our community, to the world,” she said. “And why not make it a positive statement?”

Staunch tries to live by this tenet every day. “The biggest thing is that every day, you get up, and you try to do better every single day. You just keep trying to be friendly and sincere,” she said.

Bringing joy to the community 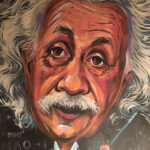 Holly Anderson is the executive director and president of Rochester’s Breast Cancer Coalition of Rochester. She knows Staunch through their annual ARTrageous Affair Gala. Each year, artists donate artwork for auction to raise money for BCC’s work to support people diagnosed with breast or gynecological cancer.

“We’re so fortunate that she picked us. We love her! Her stuff is so great and so popular and so different,” she said.

Staunch is more than happy to donate her time and energy to BCC since she knows how pervasive cancer is. “I feel that cancer touches all our lives,” she said.

Anderson said she is glad that Staunch has stood by them and has helped them out so many times over the years. “Lorraine has stuck with us through thick and thin and I just think the world of her,” she said.

“She’s just so real,” continued Anderson about Staunch’s positive attitude toward life. “You meet people all the time that that’s their shtick. It’s truly who she is. There’s no catching her down. I’m sure she has [bad days], we all are human. I’m sure that there must be dark days in Lorraine Staunch’s life, but you would not know it. She just has a way of looking at the world in a more positive way.”

“I’ve never seen her just down. I’ve never seen that part of her,” she said. “She just makes you want to move. She puts a smile on my face and she makes me laugh.”

Guerrieri met Staunch a little more than 13 years ago when she hired her to paint a mural in her child’s nursery.

“At the moment I met her I loved her, because she came in with that positivity,” she said. “She took a deep breath, and she came into the room and had that positive energy and was always happy, smiling, and I was like, ‘Oh, this is amazing.’” 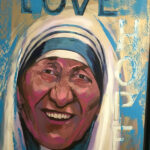 When Guerrieri’s daughter was born with Down Syndrome she became involved with Gigi’s Playhouse, a nonprofit organization dedicated to supporting individuals with Down syndrome. Today she serves as the vice president.

When it was time to design the interior of the building at Village Gate, Guerrieri immediately turned to Staunch, because she wanted her “good vibes.”

“We wanted to make sure when our participants came into Gigi’s that they felt good,” she said.

The result is a 3,800 square foot building filled with Staunch’s positive art including the Rochester city skyline. “So many people have commented as soon as they walk in that door. They are like, ‘We just feel like we’re at home. It’s just so inviting,’” Guerrieri said.

In addition to donating her time and skills to the decor Staunch also donates to their fundraising events.

“She always gives her paintings to put in the auction,” Guerrieri said. “She never takes a dime. She does this out of her heart. She absolutely loves it.” 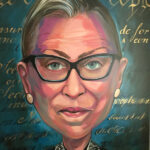 Anderson noted that Staunch does the same thing for them and other charitable events around the area.

“She often buys a ticket and goes, so she’s doing a bit of dual support. And, you know, she’s just so generous with her time and her energy. She has so much energy and enthusiasm for the community and wants to make her art relevant and meaningful to people going through all kinds of things,” she said.

When asked what one word they would use to describe Staunch, both Anderson and Guerrieri couldn’t stop at just one.

“Effervescent,” said Anderson without hesitation. But then she quickly added a few more, “Vivacious and effervescent. Ok, three words—and contagious!”

Guerrieri added her own word, “Exhilarating, because when I’m around her she makes me want to do stuff. She just puts that fire in everyone’s butt!”

It’s clear that Staunch is a community member intent on uplifting the people she encounters. 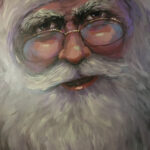 “I think there aren’t enough positives in the world right now,” Staunch said. “So, I’m just doing that tiny little part in that tiny little section of my world and letting it go out there and multiply.”

Currently, Staunch’s studio is only open to clients by appointment only. In addition to her Amazing Women project and private commissions she is working on artwork in a liquor store in Canandaigua and a new barbecue restaurant in Fairport.

Photo by Michael Rivera. Lorraine Staunch with some of her portraits in her studio in Fairport.