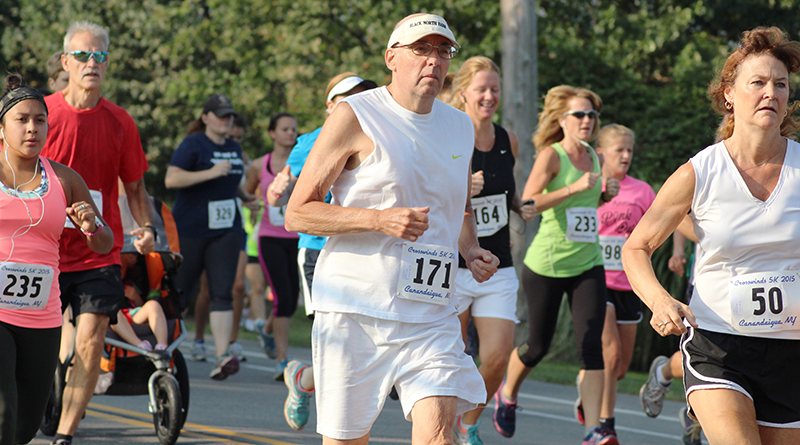 Bruce Rychwalski suffered a serious heart issue seven years ago. After that he started running 5K marathons — in July he ran his 300th race

Bruce Rychwalski is on the go all of the time. And that’s not just when he runs, although he does plenty of that.

That would be a huge achievement for most people, but it’s a pretty big one considering that’s not Rychwalski’s 300th race over a lifetime. It’s his 300th 5K since getting a pacemaker/defibrillator in 2011.

Asked to estimate how many 5K races he’s run in total, Rychwalski, 68, chuckled and said he can’t even begin to try.

Rychwalski, who grew up in Gates, went to St. Helen’s and Gates Chili High School.

He served in the United States Air Force for four years until 1972 and earned the rank of staff sergeant and was awarded the Air Force Commendation Medal.

He took up running during his military service. This was during the time that aerobic training was becoming popular, Rychwalski said. One day, a secretary, who was a jogger, asked if he wanted to tag along.

After serving in the military, Rychwalski went to Monroe Community College and SUNY Brockport. He worked as a buyer/planner for Eastman Kodak Co. for 25 years.

Running remained a big part of his life. One day in April 2011, while working out on a treadmill in the exercise room of his apartment complex, he started feeling unwell.

“All of a sudden, I couldn’t catch my breath. I was sweating profusely. Something wasn’t right, so I got off the treadmill.”

His breathing eventually regulated but he still didn’t feel well. The desk clerk called for an ambulance. Paramedics discovered his heart rate was extremely elevated so he was shocked with an automated external defibrillator.

Unity Hospital doctors discovered that he had cardiomyopathy, a genetic disease of the heart muscle which makes it harder for the heart to pump blood to the rest of the body.

“Do whatever you can do. If you can’t run, jog. If you can’t jog, walk. But keep moving.”
Bruce Rychwalski on how to stay healthy.

Rychwalski had to have a pacemaker/defibrillator put in. While recovering from the procedure, he swapped out running for brisk walking.

“No one ever discouraged me or told me to stop running,” he said. “The cardiologist just told me not to go out there and run like a 30-year-old and make sure I don’t get my heart rate up too high.”

He completed his first 5K race post-surgery that August (four months after his procedure). He set a goal of 100 races, which turned into 200, which became 300. He’s only had one episode where his defibrillator shocked him. It happened when he crossed the finish line of a race.

That has not deterred him.

“A couple times, [my cardiologist] looked at the reading and she’ll say, ‘What were you doing Saturday, July 20 at 9 o’clock in the morning’ and I’ll say, ‘Oh, I was running a 5K’ and she’ll say, ‘You were pushing yourself too much. Your heart rate went up,’” Rychwalski said, chuckling. “I can’t get away with anything.”

Rychwalski, who said he has been active his whole life, volunteers for Ganondagan State Historic Site in Victor. At 50, he took up horseback riding. He volunteers for Purple Pony Therapeutic Horsemanship at Double G Ranch in Bergen. The program offers opportunities to persons with disabilities and other special needs.

“That’s when I’m the happiest: when I’m on a horse out in the middle of the woods,” he said.

About a year ago, he started Rochester Running Heroes, a club for runners who have chronic health conditions like diabetes and heart disease or a spinal, neurological, gastroenterological or urological disorders. The club is open to runners who have medical devices like heart valves or insulin pumps, too.

Rychwalski is a member of the Greater Rochester Track Club and has been awarded its Silver 100 Mile Milestone Patch every year since 2012. He hopes to get it again this year.

“Bruce is a motivated individual and proof that a cardiac event or stroke doesn’t have to define you. He is a shining example of what life after recovery can be,” said Marc Natale, executive director of the Rochester & Buffalo American Heart Association.

Not bad for a guy who never played sports.

Last year, he ran 56 5Ks. This year, he is aiming for 33. Rychwalski said he plans to keep on running after he crosses the finish line of his 300th 5K.

In addition to being a way to stay fit, participating in races is a great way to socialize, Rychwalski said.

“It’s kind of a humbling experience for me now because most of the people that were my friends and in my age group, I used to beat them all the time and now they beat me,” he said. “You just have to accept your limitations.”

Indeed, pushing through limitations is his advice to people who may want a more active lifestyle but have some barriers.