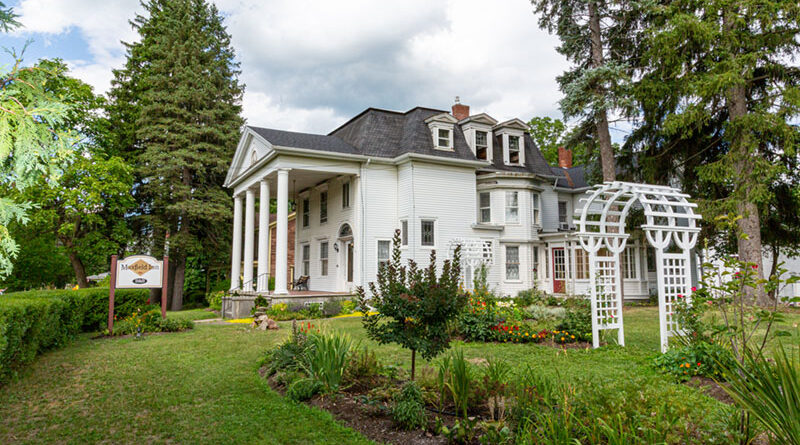 People tell Wayne Buchar his painstaking seven-year quest to resurrect a decaying historic landmark has been a labor of love.

He says they’re half right.

“It hasn’t been labor, it’s been a fascinating journey,” said the host and owner of the newly and lovingly restored Maxfield Inn on Main Street in Naples. “Everything has been layered with history.”

Buchar said he could see the grace and charm of the languishing 1841 classical revival mansion immediately, even as it lay in decay.

“When I first walked through, there was nothing here except a grand piano, one light fixture, about half the radiators and two beautiful sets of cut glass doors that lead into the parlor,” said Buchar. “But I could see the beauty of it. Just walking around with all the cut glass in the doors and windows, the place was sparkling. It was amazing. You just don’t see that anywhere.”

Although the long-dormant building had ultimate potential, Buchar knew it would be a “money pit” in every sense.

“You could climb outside through the basement,” he said. “The pipes — wrapped in asbestos — had frozen, the basement was flooded, the foundation was crumbling, there was a hole in the roof. It was so disgusting.”

Buchar, a former engineering program manager at Xerox, said he’d always dreamed of restoring an old home with his wife, Christine. She also had aspirations of owning a small jewelry and craft boutique in Naples “because of the artists, the Grape Festival and everything,” he said.

So in 2013, with eyes wide open and a strategy fueled by pragmatism, optimism and a never-say-die work ethic, the Buchars took ownership of the Maxfield Inn. It had lay on the market, eroding daily, for five years.

“The village did everything possible to help,” said Wayne Buchar. “I got a call from the mayor [Brian Schenk] who offered to meet me at the property with the building inspector and assessment officer. There was no heat — it was 23 degrees — and we sat on the floor and talked. I was really impressed with the village. If they hadn’t done all that they did, I probably would have walked away.”

Ultimately, Buchar said he was “destined to buy this house.”

That, and an “adorable little shop” just down Main Street for Christine’s craft and jewelry store, Sweetblessing Boutique.

“Anything that’s stood in the way has worked itself out or was moved out of the way for me,” he said.

With the decision made, it was time for Buchar to roll up his sleeves and open his wallet. Working seven days a week from 6 to 8 a.m. and 6:30 p.m. to midnight, 12 months a year for seven years, plus vacations, Buchar logged tens of thousands of hours in back-breaking labor, meticulous restoration and reconstruction, painstaking online research and tireless sourcing of period-specific furnishings.

“I just got to work on a four-phase plan,” he said. “It took me about three weeks of not sleeping to put the whole house together in my head. It’s a huge place.”

Phase One was triage: fix the parts that were in crisis.

That meant picking up the back of the house to rebuild the foundation under it, reattaching the porch, re-shingling and repairing the shingle and tin roof, repairing broken pipes and getting the water back on.

“I hired no one to help except someone to do the roof,” said Buchar. “The rest I did myself with an apprentice, two colleagues from work and a friend who’s a retired pipe-fitter. One of them would come here for a week from Iowa just to work with me side by side rebuilding this house.” 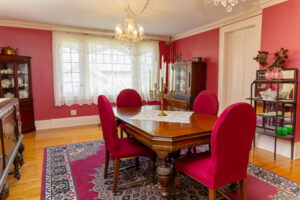 Phase Two was interior triage. Ceilings had fallen and cleanup promised to be a monumental and costly task. So Buchar earned his lead abatement certification, and his son became certified for asbestos abatement. Problem solved and dollars saved.

Phase Three was beautification, like carefully removing a century and a half of grunge from the inn’s original wood floors and polishing them to a lustrous sheen, restoring its detailed woodwork and sparkling light fixtures and installing period-specific wall coverings and furnishings.

“I’m adding my own 1903 enhancements to it,” said Buchar, “Like the old gardens. I built two arbors and I’m trying to get some of the original plants from the [Luther’s and Maxfield’s] descendents.

“I’ve also added extra doors, and am enhancing the inn so it will last another 150 years,” he said. “I’m making it a winning venue so whoever has it next can make a ton of money. I don’t want it ever to get it in the situation it was when I got it.”

In future phases, Buchar will build a Victorian gazebo to match the stately and curvaceous arbors, expand the large garden and add water features, and restore the inn’s 2,400-square-foot, three-floor carriage house and pony house that are currently home to antique carriages. He’s still in the middle of restoring the inn’s third floor ballroom for group and family gatherings.

Buchar smiles when he talks about his “adopted ancestors,” the families who first lived in and loved the Maxfield Inn. Especially the mansion’s founder.

It was Calvin Luther’s love for his childhood sweetheart that prompted him to purchase the property in 1821 and spend a decade building the front portion of the house, Buchar said. His goal: to entice his future wife, Rebecca, to marry him and move to Naples. The couple’s son, Sumner Luther, later penned a diary detailing “every dream and thought” as he grew up in the home, said Buchar.

“He and his friends used to stick their trumpets out of the window and play to Main Street,” he said.

Two generations of Maxfields lived there, and the Naples Savings and Loan Bank was off the porch at the Maxfield residence. The bank safe, door and old door bell are still there.

“I wasn’t doing this to make money,” said Buchar. “I was doing it because I love doing it. So why only half do it? If you’re going to go to the trouble of restoring a house, why not restore a house?”

Cutting corners on renovations would be “like taking a Van Gogh masterpiece and repairing it with finger paint,” he said.

“Even the shadows on the staircase are geometrically perfect,” he said. “The pitch of every window was planned — you don’t need any lights on during the day because they let the light in.”

The Inn now boasts the Maxfield’s original china, its original fireplace, and an intact 1,800-bottle wine cellar from the 1920s.

The phrase, “it takes a village” rings especially true for Buchar, who said over the last seven years, people who used to live in the house and neighborhood have turned up on his doorstep — some in tears — with historic photos, pieces of original furniture that had been sold, period tin for the roof and the inn’s original exterior hand railing.

“When you’re doing a house like this, you attract people who value history, you attract the original families,” said Buchar. “The people just come out of nowhere. One man watched me work on the roof and told me his father had put that roof on.” 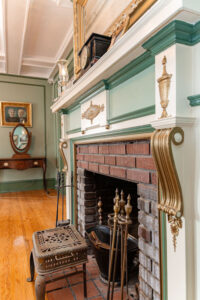 The extensive research that goes hand-in-hand with restoration has provided an unexpected bonus for Buchar: a hands-on education.

“It’s almost like space exploration, but instead of exploring the stars, you’re going back in time,” he said. “I almost feel like a kid. I was never into history, but if they’d done this in school, I’d have been interested.”

Buchar said he’s had many kids who, after visiting the inn, said they wish they knew more about the village and its history.

“A lot of people are saying the young kids don’t care about that stuff, and they’re absolutely wrong,” he said. “Half of my guests are between 25 and 35, and they are so fascinated. They expect me to know about all that and I do. They leave here and say ‘someday we want to do this.’”

Time to jump in

People often ask Buchar how he had the courage to take on such a daunting task, and how he knew where to start. For that answer, he points to his father.

“My dad always told me, ‘Nobody’s smarter than we are. If they figured it out, we can, too. And if worse comes to worse, you’re paying for an education,’” said Buchar. 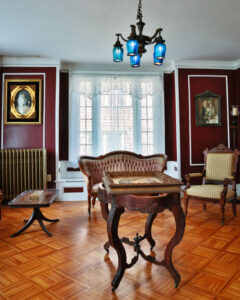 But not before he had a safety net, which he recommends for anyone considering taking a similar plunge.

“I make sure I know my escape route,” said Buchar. “If this goes bad, what will I do? What’s my backup plan? That’s what lets me sleep at night.”

Once there’s a backup plan in place and the worst-case scenario is covered, “then you jump in” he said.

When it came time for roof repairs, Buchar’s axiom was put to the test quite literally. Steep pitches and slippery footing were both dangerous and unnerving — a fear of falling brought his part of the work to a halt.

Until Buchar bought a roofing harness.

“Once I had that harness on, then I could do anything,” he said. “So go for whatever your heart tells you to go for, knowing you’ve got a backup plan.”

An added surprise: when you’re tackling a job that benefits everyone, people standing on the sidelines will be ready to help.

The promise Buchar — and village officials — saw in The Maxfield Inn seven years ago has now become a reality. Its resurrection has further boosted the community’s pride, economic future and historic identity.
And as Buchar has passionately and faithfully invested in the past and future of Naples, he was an obvious choice to become president of the Naples N.Y. Historical Society, a role he’s naturally gifted to fill.

“It’s definitely a jewel,” said Buchar of his resurrected inn, which now stands proud over stately gardens in the summer sun. “It was really a shame what happened to this place, and I want to make sure it never happens again.”