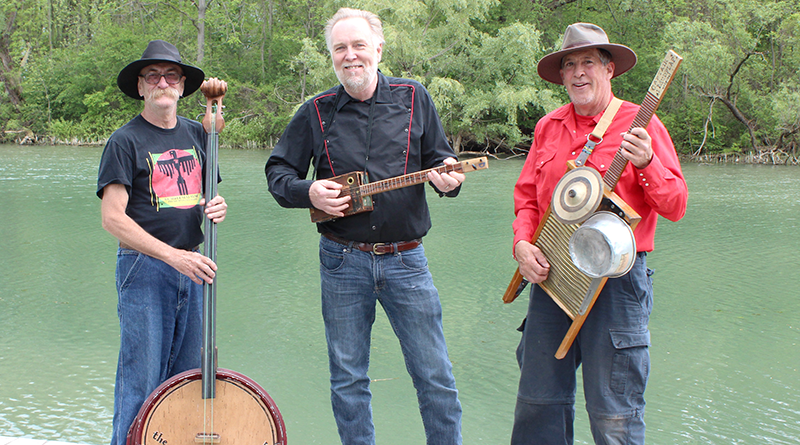 Equipped with cigar box, weed whacker and pickle barrel, three-piece band gets back to basics

“You kinda walk down this little dirt trail, and it’s pretty cool,” says Kevin Sprague, visualizing the scene for you. “They have it set up like an old juke joint or Cajun shack, and there’s a Ford Flatbed truck that sticks out over a pond – that’s the stage. The setting is kinda perfect for what we do.”

That setting is the Bagg Dair Stage at Three Brothers Winery in Geneva, and the guys who think it’s perfect are members of the Muckland Crooners — Kevin Sprague, 61, Tim Carmon, 58, and Bucky Gelo, 68 — purveyors of original songs about life and the things it does to us in Upstate New York.

Definitely an off-the-map acquired taste, the Muckland Crooners have been around in different iterations for about 10 years, started by Sprague and childhood friend Bill Parsons (affectionately remembered as “Captain Mudflap”) who wrote some of the songs the Crooners still sing. Through the years, they’ve had as many as six members, but for this summer and fall, the magic number is three.
And to know them is to love them. They have a following because of what they bring to every down-home performance.

“The whole point of this thing,” said Sprague, “is that we do this primitive instrument thing, but the sound we come up with is pretty good. It’s a sound that doesn’t match the visual of the instruments, so, when people come down the trail to hear us — and they see that we’re playing these old pieces of crap, kind of junk-looking instruments — it boggles their minds. That’s the fun part of it.”

“I like to use old cigar boxes” he said. “They have to be wood, and the neat thing about them is you can actually date them because of the tax stamp on the back. Mine are all over 100 years old.”

The bridges on the guitars are eyebolts or eyehooks, and one bridge is propped up and made level with a quarter. The guitars have three strings and are electrified.

“We have to tie a ground wire to his ankle and ground him to the nearest pole so he doesn’t get hurt,” explains Carmon, who plays the washboard.

“It’s called a ‘guitashboard,’” Carmon corrects, showing that it has a neck like a guitar, but the body is pure washboard, with an aluminum camp pot and cymbals attached. “Captain Mudflap gave it to me as a gift before he left for Texas.”

Gelo, the bass player, toils magically with a two weed whacker-stringed instrument that has a PVC pipe neck, a hand-carved head, and a resonating body made out of an old pickle barrel. Musicians will also note that the bridge is made out of a rat-trap, snapper and all.

Once audiences realize the Muckland Crooners are real musicians serious about having a good time, a wacky kind of fun ensues.

Performances are part music, part banter amongst the group plus  dialogue with the audiences; it’s always intimate and relaxed.

“We get a lot of people who come to our concerts because they’ve run into us over the years and have a good time with us,” Sprague said.

“And it’s young and old,” added Carmon. “The kids take to it. We’ve had kids playing a guitar.”

“We separated and showed them all about our instruments and gave them a chance to play them,” said Carmon.

Sprague has taught classes at the Arts Center in Newark, showing kids how to put together their own cigar box guitars.

Wineries like Three Brothers have been good to the Crooners.

“It’s a lot of fun playing here,” Sprague said. “The typical audience is a bridal party, where all the girls are going out for their bachelorette party.”

“They love to play the washboard,” said Carmon. “We call them up on stage to participate. They also enjoy photo ops with us.”

“We get them involved in the show,” adds Sprague.

Gelo is retired from managing music stores in Rochester and Virginia, and he’s a Navy veteran who spent time as a Navy Band rock guitarist. At the moment, he’s playing in four bands and making wine in his spare time. Sprague is a territory manager for a heating and air conditioning distributor and Carmon is one of his clients, a self-employed HVAC contractor.

Sprague was a bit of late bloomer to music, but he and Parsons grew up together musically. Carmon, who picked up an instrument at age 9, has been with the Crooners about four years, and has played with a lot of area bands — the Prison City Rockers, Blind Spot, Short Bush, and Ambush (with Parsons).

The Crooners have two more gigs scheduled at Three Brothers Winery July 22 and Sept. 23, and two more dates in the offing if everyone’s schedule allows. But if the phone rings, more dates can be added.

“For us, the root word is ‘fun,’” said Carmon. “This is a fun occupation and most everybody who’s been involved with this band plays two or three instruments.”

“These guys are also very good sports,” said Sprague. “Bucky is a very accomplished stand-up bass player, among various other instruments, and he’s a good-enough sport to play an old pickle-barrel instrument with us. Timmy is also a very good musician and we relegated him to the washboard, and he’s a good sport about that.”

“You get a lot of self-satisfaction in doing this,” Carmon said. “It’s not a money-driven thing; never has been. If it were, we’d be fools. Maybe you’ve heard the old expression that a musician is the person who loads $5,000 worth of equipment in a $500 car to go make $50 at a bar.”

“That’s me,” said Gelo. “Tuesday I made $20 but I had a ball. You watch their eyes, the people in the audience, and see their smiles, and a couple of people danced.”

“You’re connecting with people on a nice level,” Carmon agreed. “They look to you for a little bit of a release, to take the stress out of the day.”

What to expect from a Muckland Crooners concert?

You’ll hear some of their original songs like “Small Potatoes” (“It’s just a small-potato town … ”), “Proud to be a Muckland Crooner,” and “Bound to Roll.” But the guys also do some Johnny Cash, Neil Diamond, Beatles, Creedence Clearwater Revival, Bo Diddley, Neil Young, and really get into “Young Blood” by the Coasters.

You can check them out on Facebook, plus there’s is a limited sample of their music on YouTube, CigarBoxNation.com and ReverbNation.com. There’s one CD, “Small Potato Town,” but that’s hard to find.