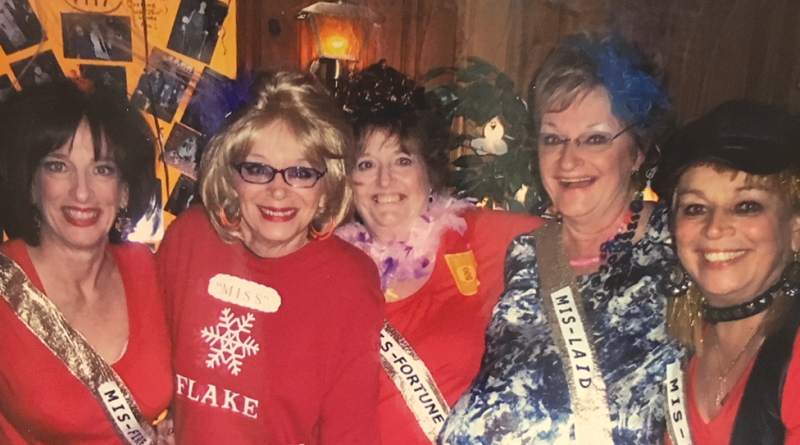 Together: Connected through the 19th Ward in Rochester, friends’ bond is forever

By definition, you have to be “of a certain age” to have had friendships that last 60-plus years.

You also have to have grown up during a certain time in American history. Friends since kindergarten or 1st grade — Patty Tyrell Darling, Kathy O’Hara Macartney, Kathy McDonough Olney, Cathy Horn Page and Peggy Schmitt Taylor — fit the bill. They all grew up in Rochester’s 19th Ward in the 1950s.

When asked individually what has made their friendship endure, the five friends credit many of the same reasons.

“We all went to St. Augustine’s Catholic school,” says Darling. “Even if you weren’t Catholic, everything revolved around the parish. If you lived in the 19th Ward, your parents probably grew up there, too. Everyone knew each other’s family. I can’t describe it any way except ‘Happy Days.’”

“The 19th Ward was a great neighborhood,” said Macartney. “We walked everywhere. We hung out at each other’s houses, and when you were in someone’s house, you were part of the family.”

Walking together to school and home for lunch, to ice skate, swim, go to church, hang out at the corner sweet shop, go canoeing (or “oaring,” as it was colloquially called) on the Genesee River — the women grew up in what truly does sound like an American idyll. Their common experience adds to their relationships now, they say.

“It’s a comfort when you’ve shared so much,” says Olney. “We’ve laughed, cried, been through good and bad. We’re able to support each other, and it’ll always be that way now.”

“It’s amazing what we can talk to each other about,” says Page. “We’re so close. That’s part of the reason it’s lasted so long.”

Taylor concurs, adding, “We’re very supportive. We’ve shared weddings, births. Several of us have been through difficult times. We have some similarities: We’re all feisty and opinionated. We also accept our differences. We feed on each other’s wit and humor.”

Laughter, fun, and the occasional misadventure are other common themes for the friends.

“We’d have pajama parties every weekend in high school, often at my house,” says Darling. “It was such a safe neighborhood. We danced in the streets in our baby-doll pajamas! As we got older, we still would have ‘pajama parties.’ While we talk about people we’ve seen from the neighborhood, we also talk about kids and grandkids. Our parents used to yell at us to go to sleep — but the problem now is that we start drinking at 4 in the afternoon, and we are yawning and falling asleep by 9.”

“The church was right across from the soda shop. We’d tell our parents that we were going to 11 o’clock Mass,” recollects Macartney of the occasional youthful subterfuge. “We’d get the church bulletin, hang out at the soda shop, then go home and say we were at church.”

“We’re constantly laughing,” says Olney. “We have that common core, so we always know what the others are talking about. Who has pajama parties when you’re in your 60s?”

The world has changed so much — with technology, security and mobility — that their own children, nieces and nephews don’t automatically have the ability to foster such long-term relationships.

“Where we came from and the era that we grew up in bonded us,” says Page. “A lot of people say they’ll stay in touch after high school, but within a year you’ve lost track. Today’s kids aren’t as tight as we were.”

“All those years that we grew up in such close proximity — the five of us never lost that old-fashioned neighborhood feeling,” adds Taylor.

“When you’ve known someone over 60 years, ‘one lies and the other swears to it,’” attests Darling. “They know more about me than my husband and kids do. There are no secrets, and you don’t guard yourself. These girls have known everything about me since I was 6 years old; it’s kind of like having four sisters.”

Future plans include more travel and get-togethers. “You look forward to being with people who you’ve known all your life. It’s precious, and you don’t want to ever lose it. We’ll always be close,” says Macartney.

“They’re wonderful girls, and I love them to death,” says Olney. “We never run out of things to talk about. I have their back; they have mine. If you’ve put up with each other this long, you’ll do it until you die.”

“They’re just such great friends. I love ‘em all to pieces,” says Page. “When we get together we have an absolute ball.”

Taylor, who recounts both hilarious and touching anecdotes, says, “The most important thing is that all of us can count on one another for help in any way, shape or form. They are my family.”

With around 22,000 residents, the 19th Ward is the largest neighborhood of the city. Due to its prominence, many people not familiar with the area confuse the 19th Ward with the Southwest Quadrant as a whole. The SW Quadrant, also called Sector 4, actually contains five other neighborhoods. (Plymouth-Exchange in particular is often mistaken for part of the 19th Ward.)
The 19th Ward is bordered from its northern edge, by West Avenue, Genesee Street, Scottsville Road, and the Erie Canal. The southeastern portion is called Brooks Landing and is connected to the University of Rochester River Campus via a pedestrian bridge.