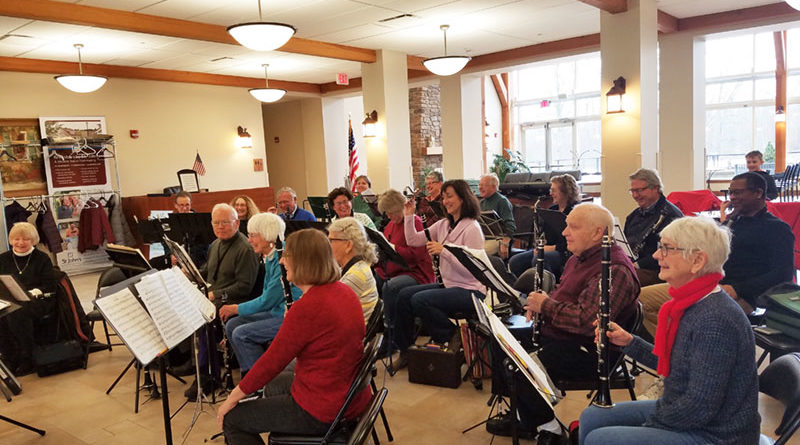 The New Horizons Clarinet Choir gathers people from all walks of life who form a bond around playing the clarinet. Join to play or to learn how to play

Gates resident Jeanne LaBarbera, 76, hadn’t even picked up a clarinet for almost 45 years when she joined the New Horizons Clarinet Choir in 2011.

She played clarinet in the high school band in Dunkirk and was a music major at Shenandoah Conservatory of Music in Virginia.

But after graduation she didn’t embark on a musical career.

Instead she worked for 30 years as a social worker with Monroe County Social Services before her retirement in 2009. That’s when she made the decision to try the clarinet again. She tested the waters with private lessons, but it wasn’t long before her instructor suggested she join a local clarinet choir he knew. That was in 2011. Today LaBarbera is a proud member of the New Horizons Clarinet Choir.

The New Horizons International Music Association (NHIMA) is a nonprofit organization designed to provide music opportunities for adults. It is grounded in the idea that any adult can play an instrument or sing, regardless of age or prior experience.

Roy Ernst, professor emeritus of music education at the Eastman School of Music, founded NHIMA in 1991.

Alan Woy, 74, of Fairport is the current conductor of the New Horizons Clarinet Choir. Woy recalled that Ernst put an advertisement in the newspaper announcing his idea to gather older adults to form a band.

“He started this on the strength of about a four- or five-line newspaper ad saying, ‘If you are retired and over 50, once played an instrument, never played an instrument, or you’ve always been playing an instrument come and join the New Horizon Band,’” said Woy. “His initial hope was no hope at all. But 45 people showed up which was astounding. And so basically from that start, New Horizons has gone worldwide.”

Today there are over 300 NHIMA chapters around the world. Bands gather daily to play music in places as far away as England, Italy, The Netherlands and Australia.

While Ernst originally conceived of the organization as one focused on older adults there is no age requirement today. Any adult, interested in learning music or honing their talent in a group setting is welcome to join one of the various musical groups in NHIMA. Rochester area musicians who want to be a part of the New Horizons program at the Eastman Community Music School have their pick of a vocal chorus, string orchestra, jazz ensemble, big band ensemble, and a host of several other programs.

The New Horizons Clarinet Choir formed over 20 years ago when the clarinet section of the New Horizons band started meeting to practice together. Today there are about 30 people in the choir, but when the winter snowbirds return to town the numbers rise to 40 or more.

Members come from all areas of greater Rochester and include musicians with a variety of experience levels. Many, like LaBarbera, took time away from their clarinet to focus on career, family and other life pursuits. Retirement has offered LaBarbera and her fellow choir members the opportunity to rededicate time to musical practice.

“Most of these people are very highly educated,” said Woy. “We have a doctor who went to Harvard Medical School, Bausch and Lomb retirees; we have Kodak retirees who have chemical engineering and electrical engineering degrees. There’s a lot of brains, and they’re very eager.”

The choir’s repertoire includes everything from traditional pieces by composers such as Mozart and Debussy to folk music, show tunes and marches. They’ve even been known to play renditions of songs by pop icon Michael Jackson.

The choir’s conductor Woy is assisted by co-conductor Ken Scott, 64 of Webster. Woy taught at the Crane School of Music at SUNY Potsdam for 38 years before he retired in 2004. He started working with the clarinet choir about 12 years ago. As the group began to grow, though, he realized that he needed help, so he brought Scott on as co-conductor.

Scott was Woy’s student at Crane before he began his own career in music as a public school teacher for 33 years in Hannibal and Williamson before he, too, retired.

The Magic of Music

Retired physician Thomas Ashby, 80, of Penfield is a dedicated choir member who believes that music is an important way to maintain a youthful and healthy lifestyle.

“Virtually everybody here is mentally, physically and emotionally younger than their temporal age because of the music,” he said. “Every senior in this city has opportunities to get involved with something like this if they want to.”

For Scott, the magic lies in the connection between the fellow clarinet players. He noted that despite their diverse backgrounds, the musicians come together to practice and perform as a cohesive, joyful group of friends and colleagues.

Woy agrees that the New Horizons Clarinet Choir is a special group of musicians on many levels but particularly because of their interest in improving their skills.

“They’re very dedicated. Many of them take lessons, and when they go to these international conferences, they’re upgrading their equipment, instruments. That’s very rewarding to see that kind of commitment at this age, and I think one of the things that really keeps us going into our senior years.” 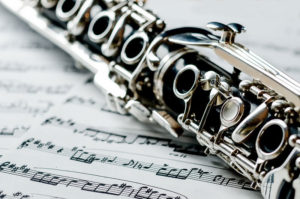 The New Horizons Clarinet Choir is a year-long course through the Eastman Community Music School. There is a $180 per semester fee to participate. They practice every Monday at The Brickstone by St. John’s on Elmwood Avenue. The choir performs at venues around the Rochester area as well as around the country. They have attended and played at conferences in Texas, Louisiana, and Florida.

To learn more about Eastman Community Music School, visit www.esm.rochester.edu/community. To learn about the New Horizons Clarinet Choir and listen to them play visit www.nhclarinetensemble.org.

Photo: Members of New Horizons Clarinet Choir during a recent practice. Number of participants swells from 30 during the winter to more than 40 during the warmer months.