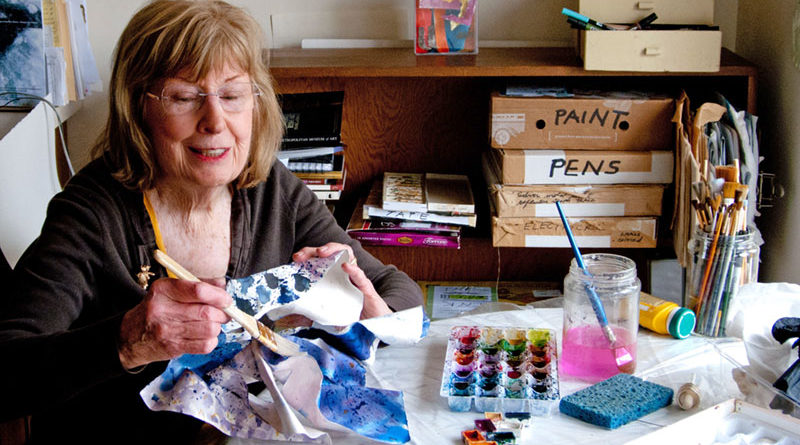 Artist Jane Notides-Benzing works the paper she uses in her fiber art sculptures like she would bread dough: stretching, pulling, kneading. Then she lets it rest and waits for the energy it’s imbued with to speak to her and tell her what else it needs. And, like a baker, she does this all in her kitchen.

“My studio is the kitchen, where the first part of my effort — water, paint, pulling, stretching, drying, re-painting — begins.”

Notides-Benzing, 82, believes that every aspect of her home life must intimately interweave with her art.

“I hang the in-progress pieces in the hall and living room where I can see them daily. On passing, as I go about my personal or in-home needs, I can reflect on what each artwork needs next, hoping to give it a sense of excitement and mystery.”

She’s been in Rochester since 1968 where she did technical writing and wrote training manuals for Xerox before her retirement several years ago.

She also used her knowledge of art and art history to teach art appreciation for private clients over the years. Sometimes she would host talks in her home for small groups. In addition, she gave occasional lectures at the University of Rochester’s Memorial Art Gallery.

Today she focuses primarily on her 3-D wall-hung paper art and is currently prepping for her June exhibit, “Forever Paper,” at the Geisel Gallery at One Bausch & Lomb Place.

Jean Geisel has managed the Geisel Gallery since 1995 when it opened. Geisel was the second woman to serve as corporate officer at Bausch & Lomb in 1986 and in 1996 she was promoted to secretary of the company. She retired in 2016. Her gallery showcases local and regional artists. 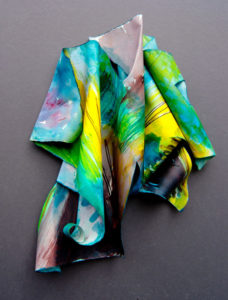 “I deeply admired Jane’s work — the techniques and conception — transcending to create works characterized by layered compositions, indistinct shapes and remarkable intricacy. Her work creates a complex materiality all of its own.”

Notides-Benzing uses a heavyweight archival paper for her sculptural work. She wets it, molds it, paints it and manipulates it to create work that is vibrantly alive and fluid. “It’s a commercial paper,” said Notides-Benzing. “But it does what I want it to do. It allows me flexibility, a painting surface that I can lay colors to. I can twist it, stretch it within reason, wet it and dry it.”

Her life-long attachment to paper as an artistic medium was the reason she chose “Forever Paper” as the title of the upcoming show.

“I was thinking about why this show is called ‘Forever Paper.’ It’s because my fingers have been forever messing around with paper whether it was with a paintbrush as a child and then pencils, pen, and writing in school years and then digital word processing. Now the big focus isn’t with a brush and a pencil or digital, it’s with the flexibility of paper.”

Notides-Benzing’s pieces seem to float and flutter, some climbing off the wall like mythical creatures while others mimic the sweeping motion of silk rustled by a breeze. They attract the viewer to move beyond simply experiencing them visually; hands instinctively want to touch and move over every inch of the work.

Notides-Benzing says that actually, visitors can touch them if they like. The pieces are sturdy, she noted, and would lose something if encased in the glass of a display case.

“Jane has a really good eye for composition and her ability to take on material and have it form what she has in her head. She’s a good craftsman, you know, and a lot of times that’s one of the defining factors for an artist to be able to execute the concept that they have. She’s very good at being able to do that. And she’s not afraid to explore unorthodox mediums to create what she wants. She’s a very creative person.” 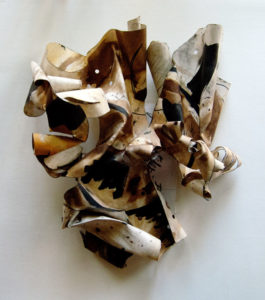 Notides-Benzing’s process is a solitary one. She works by herself in her studio-kitchen and doesn’t rely on the advice or input of others.

“When I’m doing art exclusively in my mind and in my so-called studio in my kitchen, I am really on my own. I’m doing it alone and I don’t put any of my fellow artists that I know in the position of adviser to me or critic.”

But working alone doesn’t mean that she is disengaged from the art world. She enjoys discussing art and socializing with friends and colleagues in the various artists groups she belongs to such as the Western New York Artists Group in Buffalo, the Arena Art Group in Rochester and the National Association of Women Artists.

She also has adult children living around the globe: Denver, France, Germany and Brazil. Visiting them gives her the opportunity to visit a variety of international art galleries such as the Centre Pompidou in Paris.

Reading about other artists is inspiring to Notides-Benzing as well. She recently read a book about well-known contemporary artist, Wayne Thiebaud. Thiebaud is a California-based painter who is best known for his highly pigmented and colorful depictions of cakes and pastries though he also paints landscapes and cityscapes.

Siuta, the director of the Artists Group Gallery in Buffalo, said that he thinks Notides-Benzing’s maturity gives her an edge over some of the younger artists working today.

“She’s not afraid, which is really great. She’s more open than a lot of younger artists to be very creative and do different things.”

When: The opening reception is on June 4 and is free and open to the public.

Photo: Jane Notides-Benzing working in her “studio” — the kitchen at her Rochester home.