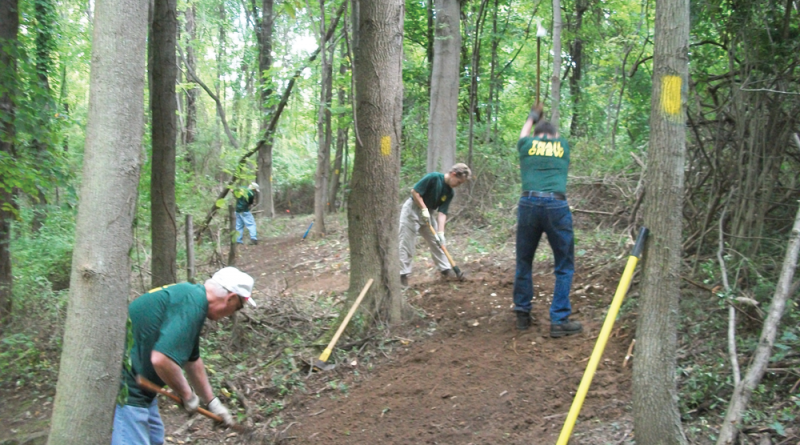 Hundreds of miles of trails throughout Webster provide a place for cycling, walking, running, cross-country skiing and snowshoeing in a natural environment away from the noise, fumes and dangers of roadways.
That’s in part thanks to the Friends of Webster Trails, formed by a group of local volunteers.

Miles and miles of trails wind around the village and town of Webster.

It is enjoyed by thousands of people each year. But many don’t realize that a decade ago, it was truly a different story. However, Hal Harris, 81, and Friends of the Webster Trails have kept the community trails vibrant and ongoing since the mid-1990s.

“Hal did a lot of the legwork when it came to making sure we had a strong organization and encouraged people to take on leadership roles,” said Shari Gnolek, president, who joined the group five years ago. “I was thinking about doing another role for the organization and he encouraged me to think about being president, and I would have never thought of it if he hadn’t felt that I could.”

The organization, which builds and maintains acres of trails, advocates for the preservation of the town’s natural character and open space. Webster trails contribute to community health by providing people of all ages with a free, attractive, safe and accessible place for exercising outdoors.

“Ten years ago, there was a movement to make sure that we would have the open space we needed,” said Harris. “We knew the community needed recreational space and we got a committee involved to provide some plans and make it all happen. It is incredible to look back now and see where we are.”

In the early days, Harris said it was a small band of dedicated people who took the torch for the cause. They felt a need to make sure open space wasn’t a casualty of urban sprawl.

Hundreds of miles of trails throughout the community provide a place for cycling, walking, running, cross-country skiing and snowshoeing in a natural environment away from the noise, fumes and dangers of roadways. The group has helped build a bridge spanning Salt Creek. The long-term project opened access to the eastern 50 acres of preserve.

Gnolek said every organization needs strong leadership as well as a succession plan for when leaders eventually step down. She said Harris was one of the main people who implemented a plan to make sure things would go smooth.

“He cares about people and he cares about the trails,” added Gnolek. “He helped build a strong team and set a great example for all of us. He doesn’t like to take any credit and understands it was the work of many people to make it come true. But he deserves more credit than he gives himself.”

On several Saturdays, the Friends of Webster Trails and volunteers spend the day cleaning the trails, making sure they are marked correctly while performing landscaping. Typically, anywhere from 20 to 30 people give their time to help maintain the trails.

“There is a large population of people who really enjoy the trails and the open space of trails,” said Gnolek, who regularly walks the trails with her family. “We have built and maintain new trails and do everything we can to make them as friendly and accessible as possible to the community.”

It’s a proud moment when they finish a job and see people utilizing the numerous trails in Webster. It might not always be fun to move heavy rocks with wheelbarrows or shovel mounds of snow away from the path. However, the end results end up being worth the trouble.

“It really has been a labor of love,” said Harris. “We view it as something of a responsibility to make sure the trails are high quality for everyone to enjoy. It hasn’t been easy, but it has been fun.”