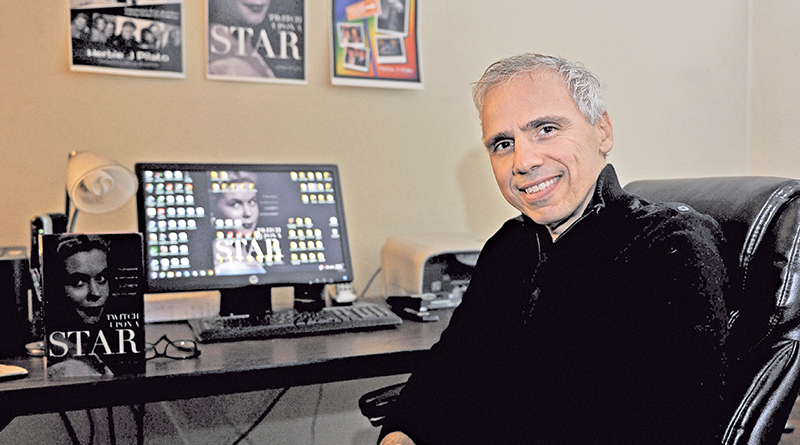 From the tender age of 3, Herbie J Pilato was an entertainer.

He danced and sang in his living room for his family in their modest red brick home on Erie Street in Rochester, until he was old enough to go across the street to the loading dock at an old municipal warehouse.

There he would lead neighborhood kids in child’s-play productions sprung from his star-struck imagination.

Little did Pilato know then, that the road between Rochester and Los Angeles was not as long as it seemed.

Because after a humble upbringing, Herbie J, as his friends call him, made his way to Hollywood where for more than three decades he has been living his dream as a successful television writer, producer, director and entertainment executive.

The 56-year-old also founded the Classic TV Preservation Society, a nonprofit organization dedicated to the positive social influence of classic television programming — something he learned early on.

“I was raised in the peanut butter and jelly generation, a different time when we would walk to school, come home for lunch, and watch television,” said Pilato. “Not to mention I lived in a fairly tough, inner-city neighborhood, so I gravitated toward the escapism of television.”

The 1960s and ‘70s were a time when society took cues from television, Pilato said. Families communicated more because of “The Waltons.” People became lawyers because of “Perry Mason” and doctors because of “Marcus Welby.”

“The Munsters,” “Get Smart” and all of these popular television shows of their day had a positive impact on society, and according to Pilato, still do today.

His all-time favorite — “Bewitched” — resonated with him so much that he spent many years personally sharing its message of tolerance and love during the turbulent times of the era.

Samantha, the lead character played by Elizabeth Montgomery, was easy to connect to, not just for Pilato, but many viewers, he said. A happy witch married to a mortal, she was an outsider who loved people for who they were, not for their status, money or what they could do for her.

“People who felt isolated, minority groups connected with Samantha, because she radiated peace,” said Pilato. “Sure I loved the magic as a kid, but during the Vietnam War, race rioting and all the junk of the ‘60s that was going on, there was Samantha’s love. That really hit a chord, and has stayed with me throughout my life.”

The importance of that message for Pilato became both his calling and mission.

He received a Bachelor of Arts degree from Nazareth College of Rochester after studying both there and for one semester at UCLA as a visiting student of television and film.

He officially moved to Los Angeles after graduating in 1983, and became a page for NBC Studios, where he worked on many shows including “The Tonight Show” starring Johnny Carson. After his contracted 18 months as a page, he performed on camera for several shows such as “General Hospital,” “The Bold and the Beautiful,” “The Golden Girls” and “Highway to Heaven.”

Pilato also later began producing and appearing as a cultural commentator on various TV shows and documentaries for several networks and studios, including Bravo, A&E, E!, TLC, Sony, NBCUniversal and Warner Bros. Besides his books, he now also writes frequently about classic television for many websites such as the distinguished www.emmys.org, a division of the Television Academy.

“Herbie J Pilato is the veritable guardian of classic television. His work is culturally important, and even imperative,” said Joel Eisenberg, co-creator and author of “The Chronicles of Ara.”

“Both his writing and his founding of the Classic Television Preservation Society will ensure for generations to come that the morals and values espoused in such programming will continue to be celebrated, and never forgotten,” Eisenberg added.

Although Pilato met and worked with many Hollywood stars during his industry tenure, one of his proudest accomplishments was his dream of meeting Montgomery, as he was drawn to her for more than her role on “Bewitched.”

“Elizabeth inspired me with her charitable ways. She was one of the first celebrities to advocate for those suffering from AIDS. She was part of the peace movement and a supporter of the disability movement,” said Pilato. “I respected her both as an artist and a human being.”

He then wrote “The Bewitched Book,” published in 1992, and has since penned and published more than a dozen critically acclaimed books about classic television — four pertaining to “Bewitched,” one titled “NBC and Me: My Life As A Page,” and his latest title, “Dashing, Daring and Debonair,” a book about classic TV male icons from the ‘50s, ‘60s and ‘70s, published last summer.

“I was honored when Herbie J asked me to write the preface for ‘Dashing, Daring and Debonair,’ said Eisenberg. “In my opinion, nobody knows more about this world than he does.”

But Pilato never lost sight of his Rochester roots. Throughout his years in L.A., he also spent half of his time in Rochester, caring for his elderly parents.

After his father died in 1995, he stayed in Rochester continuing to care for his mother until her death in 2008. During those years, he remained a bi-coastal entertainment consultant, writer and producer and presented seminars on the importance of classic television at schools, colleges, businesses, and community and senior centers throughout greater Rochester.

He also taught writing and acting for two years at the Rochester Association of Performing Arts.

“During my time in Rochester as an adult, I became a different person. My priorities changed; I appreciated everything about life more,” Pilato said. “From what I understand, all the love that we have, share, feel, believe and experience, we keep and take with us when we leave this world. So every hug and loving moment I have with people will last forever. Once I got that down, I realized there are so many people I can affect in a positive way. I make sure to have those moments with everyone. It’s a beautiful thing.”

Although he recognized this concept later in his life, it’s actually something Pilato learned early on, which he attributes to his family. Both his mother and father each had 10 siblings, so he likened every day to a party at his house where there was plenty of love to go around. The little boy from Rochester took what he learned there and applied it to his life every day as an adult and throughout his Hollywood career.

“I am very proud of being from Rochester. The hometown aspect and coziness of my upbringing there formed the foundation that allowed me to deal with not just the various pressures of Hollywood, but the world in general,” he said.

Pilato is working with Eisenberg on a new endeavor as both host and executive producer of a classic TV talk show, naturally with the positive messages of classic television at its core. But he said it was growing up in Rochester that made it all possible.

“I feel blessed that I was born in Rochester, into a loving and kind family with a solid base of life-long friends that serve as a strong support system and guide for the true priorities of life. While I have found my place and new home in Los Angeles, and I am very happy here, in many ways Rochester will always be my home away from home.”

For more information on Pilato, his books, professional compendium and affiliations, visit www.herbiejpilato.blogspot.com.