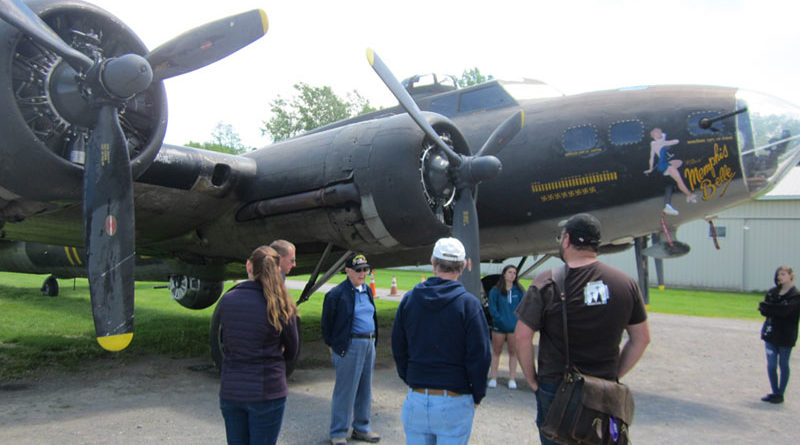 The history of the Wadsworth family and homestead is an integral part of the history of Upstate New York and Livingston County.

The family is full of veterans and heroes dating back to the Revolutionary War.

This is a narrower story, however, about 84-year-old Austin Wadsworth and the National Warplane Museum he helped found in Geneseo in 1982.

Imagine as a kid you could open your front door to see historical planes parked right outside. Wadsworth’s two sons and two daughters could do just that and they did more than just look at them; they got to know all about them and even fly them. They all became pilots.

Wadsworth didn’t have real planes to play with while he was growing up in the World War II era, but he didn’t need them. Models and toy planes were enough to light the spark of interest. “It’s all we talked about, all we thought about and pilots were all we wanted to be,” he says about himself and his childhood friends. “And it never really left me.”

Wadsworth got his first vintage plane in the late ‘60s, an AT-6, that’s still in a hangar at the museum he helped put together and is still president of today.

A farmer by trade, Wadsworth’s home and farm lands border the grass runway that has always been used by an informal group of pilots with an interest in old planes.

As Wadsworth explains, the museum’s inception came at the perfect time. At that time, many war veterans were in their 60s or 70s and glad to see the planes again. He recalls a veteran pilot who became blind but could still sit in the cockpit of his warplane and remember exactly where everything was some 60 years later.

Another veteran told Wadsworth he only got a one-way ride in a B-17 before he had to jump out. Wadsworth gave him a return ride to complete the journey.

Rides are quite popular with the public and a source of income for the museum. The biggest fundraiser and museum event is the annual air show held during the second weekend of July that is attended by thousands. Planes and pilots come from all over the country for the show.

But, as time marches on, Wadsworth and those associated with the museum want kids today to know what these planes meant to the history of their country.

“This should be more well known to kids in Rochester,” says Scott Perkins, a long-time museum volunteer. Perkins brought his kids to the museum when they were young. It’s an experience for kids that can leave a lifelong impression.

A trip to the museum should be the answer to the question of what to do with kids today, he says.

After all, it’s the kids of today that will help keep the museum going.

“They [kids] don’t get much patriotism and World War II history in school today. We can tell them what these planes meant,” Wadsworth says.

Unlike other museums or collector’s items, kids and adults can ask questions, get close to the planes, touch them and even sit in them if the plane’s been restored enough to be safe.

“We cater to inquisitive people,” Wadsworth says. “People like a deeper tour than just looking at a plane from afar,” he says. Patrons who speak with Wadsworth are in for a treat, Perkins says.

A nearly all-volunteer staff is happy to share its interest with patrons and the public as well.

The Federal Aviation Administration allows volunteer mechanics to work on the planes as long as an FAA-accredited mechanic supervises them.

That supervisor is Wadsworth’s son, Craig. “He looks at everything that goes on out there [in the hangars]. He looks in every corner,” Wadsworth says.

The challenges the museum faces in the future are similar to the challenges nearly all nonprofit organizations face: finding enough money and volunteers. “Good volunteers are like gold and you can do a lot more things with money,” Wadsworth says.

Wadsworth wants to keep things fresh in the future and bring in new war era planes. There are 12 at the museum today. Not surprisingly, they are expensive to buy, expensive to transport if they can’t fly and expensive to maintain.

One way around the massive expense is to find friends with planes willing to leave the plane with the museum for a time. Trading with other museums is another way to avoid the high cost of buying.

Grants come in handy. The museum has one now from the state to build a storage hangar.

Donations are more than welcome to the museum itself or for specific projects such as restoring the “Saigon Lady,” a C-130A, obtained from the Smithsonian National Air and Space Museum.

The plane was used by Lt. Pham Quang Kheim to rescue his family and friends from Saigon and the North Vietnamese after the Vietnam War.

Kheim became a commercial airline pilot in the United States after the war and has made several trips to the museum from his home in Ohio.

Today, the museum is working on a national memorial for those who served in the war and to the Vietnamese who escaped to the U.S. to build a new life for themselves.

The oldest plane on museum grounds today is a B-23 pre-World War II bomber. The most famous may be the “Whiskey 7” troop transport plane used at Normandy on D-Day.

Wadsworth’s love of flying and warplanes hasn’t diminished in the years between World War II and today.

“It’s a close-knit community,” he says of warplane pilots and aficionados. “It’s been a great joy in my life.”

Photo: Volunteers explain war era planes at the National Warplane Museum in Geneseo. The Memphis Belle, a B-17 bomber used in the World War II, is in the background. The museum 12 war planes.