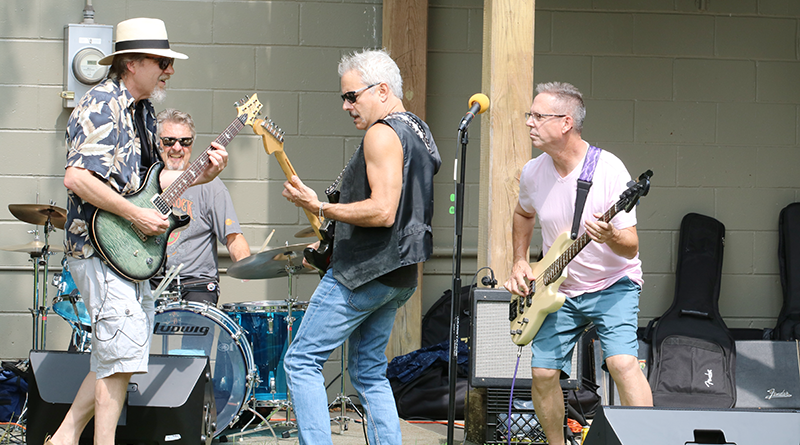 You want to shake?

Feel a need to rattle?

Then Tommy and the Tremors has something for you.

“We love early rock ‘n roll,” said Tom Petronio, 55, the leader of a Rochester-based band, Tommy and The Tremors.

“Chuck Berry is our main man. We love Bo Diddley, Buddy Holly, Eddie Cochran, the Kinks, the Stones, the early Beatles. Not a lot of bands play the music of that era anymore. We do, because we love it.”

Petronio and the Tremors — bass guitar player “Memphis” Jim Emmi, 59; lead guitar Larry Byron, 59; and drummer Bob Voellinger, 69 — have been building their creds for about four years. They play the feel-good, rhythm-rich rock ‘n roll from the first decade of the music, when things were simple and straightforward.

Emmi lays a driving, thrumming base underneath Petronio’s guitar and vocals, with Brown sailing through rapid riffs and Voellinger producing the beat that swirls the poodle skirts and shimmies those tight black slacks.

The group puts a charge in their music — “We tremorize it,” says Petronio. Good party tunes. You recognize the song, but feel the slight differences the Tremors put into it.

“It’s still mostly three-chord rock ‘n roll songs,” Petronio said. “That’s all you need to have a good time and get in the groove and have fun with the music.”

Petronio is the marketing manager for St. Ann’s Community, moving to a position there after 19 years as communications director for the Rochester School District. Emmi works in accounting and payroll at The Northfield, affiliated with Fairport Baptist Home. Voellinger is a retiree truck driver who still drives a truck. And Byron is a medical technologist in immunology at Strong Memorial. “He has half a dozen advanced science degrees,” said Petronio.

They all have early roots in rock ‘n roll. Petronio played in a band at Bishop Kearney High School, which is also where his marketing career got started.

“The band was with four of my friends in the late ‘70s,” he said. “We called ourselves ‘Penn Central.’ Our claim to fame back in those days was that we wrote a letter to the Shah of Iran, whom we heard in our social studies class had a lot of money. So we hit him up for a loan for a PA system and doggone it if we didn’t get a reply from the Iranian Embassy and a letter from the Shah and $1,000. It was just unbelievable. We had our five minutes of fame.”

At St. John Fisher, Petronio got another band going, ‘No Canadian Coins Accepted.’

Okay, it was the ‘70s. That broke up at graduation, but by then, Petronio and Memphis Jim were friends doing a blues show on station WGMC 90.0.

“Our love for blues and early rock ‘n roll was a real bond to us, and we eventually, later in life, said, ‘Let’s get a band together and play some of that stuff.’ We placed an ad for a drummer, and through tremendous fortuitousness, hooked up with Bob Voellinger, an outstanding drummer with an encyclopedic knowledge of early rock ‘n roll,” said Petronio. “He and I were immediately on the same wavelength about early 60s artists, songs, albums, obscurities…a match made in heaven.

“I knew Larry Byron from a guitar jam group we both used to attend and asked him if he’d want to play lead guitar and he agreed. That’s where we started what we have today.”

Tommy and the Tremors plays house parties, weddings, the kinds of things that friends and acquaintances tap them for. “We’d love to do a toga party,” Petronio said. “We’d be more than willing.”

He admitted that about half of their play dates in the year are done gratis. “We would not take unkindly to getting paid — we have a new PA system to pay for, and the Shah of Iran is out of commission. I can’t think of too many world leaders who might open their wallets to us.”

The Tremors would like to play for more people, at bigger venues. They’re ready. And it’s more than a wish to just be heard, they’re ambassadors for the purest form of rock ‘n roll, something they translate to new generations with feeling.

Downloads are free. You can also check out their Facebook page for the newest information.

When the music starts and people see the band is serious about having a good time and making tunes come alive, “people get up and dance, and that’s what we love,” said Petronio. “I think they’re kind of astounded to hear those old songs being given new life, in a revved-up energetic way that captures the spirit of the originals. We just love the music and try to put some spirit in it.”