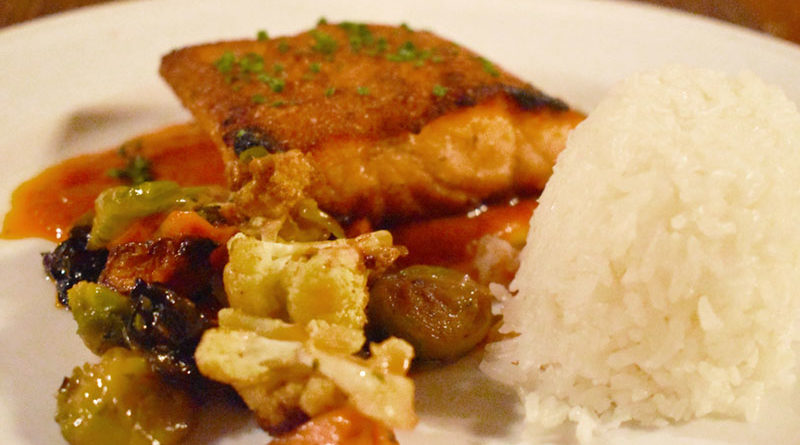 Had this restaurant reviewer known of Richardson’s Canal House, 1474 Marsh Road in Pittsford, this review would have been done last year. There’s nothing like writing a review and commemorating a 200-year anniversary of a building. In a contemporary American world where demolishing and rebuilding is such a go-to resolve, this 1818 Erie Canal inn and tavern stands strong and proud.

However, the 1979 born Richardson’s celebrated 40 years this year. Cheers!

Where a lot of restaurants present an aesthetic to convince a patron they’re traveling back in time, Richardson’s Canal House (or RCH) doesn’t have to try very hard. This establishment, which is listed on the National Register of Historic Places, has wood paneling, a display of old paintings and stone walls, among other qualities to welcome patrons in a new world. The dining area is cozy, not to be interpreted as “small,” and the small bar is such a cool aspect.

There is an outdoor patio as well; however, the cold late-November weather didn’t permit my friend Sam and me to sit outside.

The concise one-page menu didn’t allow easy decision-making. We started off with a pair of RCH manhattans ($11 each), one dry and the other perfect, with a combination of dry and sweet vermouth. The house cocktail was nice and crisp.

Soon the starters filled the table: beer-braised Berkshire pork belly ($9), pastrami spiced smoked salmon ($11), and a crab cake ($12). Albeit a typical crab cake, the hockey puck-sized patty was delightful with a lightly crisp outside and soft meaty inside. Sweet and sour pickled cabbage is served on the side along with a thick puddle of chipotle aioli. Put them together and it’s an amazing treat, easily shareable among two or three people.

The beer-braised pork belly was a standout. Served atop arugula and topped with a red onion marmalade and pickled mustard, the pork was plentiful for a small plate-sized starter. The meat was soft and practically melted in my mouth.

The most unique and artistic presentation went to the pastrami spiced smoked salmon. The cool salmon sat on top of a crispy potato latke. The soft Liptauer cheese helped the strategically placed salmon adhere to the potato cake. Capers served as salty decorations. The salmon was served on the cooler side but it didn’t affect the flavor negatively.

Sam ordered the Faroe Island salmon ($26) as his entrée. The seared fish was served with a ball of jasmine rice and vegetable medley, which consisted of Brussels sprouts, sweet potato and cauliflower. The veggies and rice were great and, although I hate to use the word “typical” — these were just that. They weren’t lacking in flavor and tasted as a person would expect but portion size, especially with the vegetables, was limited.

The salmon was up for discussion. There has been only one instance while dining where a restaurant asked me how I wanted my salmon cooked, and it was at The Revelry on University Avenue. My fiancé and I asked for it medium and it was really delightful. Although the staff did not ask us how my other companion wanted his fish cooked, it came out similar to the salmon at The Revelry — warm and pink.

I enjoyed the fish as is. My other companion wished it was cooked slightly more. It’s the beauty of eating out, not just for food reviews. Food should be a topic of conversation, and Richardson’s Canal House made us chat.

The 24-hour short rib with red wine carrot sauce was my entrée of choice. I asked it served with the veggie medley and mashed potatoes. The mashed potatoes were as to be expected, being mashed potatoes, and they were super soft and light. Nothing else was needed on the mashed spuds, and, when combined with a slice of the beef, it definitely tasted like a natural companionship.

The short rib meat was very tender and flavorful. The red wine from the sauce stood out, but wasn’t overpowering. This entrée was a much larger portion than the salmon, but portion isn’t everything. Quality is better than quantity, and leftovers can be the intangible (or inedible, in this case) memories of the overall experience itself.

Before tip, the bill for two people enjoying one cocktail each, three starters, and two entrees came to a seemingly steep $110.16.  Richardson’s Canal House lived up to providing a wonderful dining experience. Patrons don’t have to get incredibly dressed up and there is not one pretentious aspect to the restaurant. The restaurant, to note, is also very clean.

Kudos also goes to the staff. Everyone was extremely cordial. We were informed about the history of Richardson’s as well its present state. With a restaurant that is 40 years strong, it’s not a surprise.

Photo: Faroe Island salmon ($26). This  seared fish is served with a ball of jasmine rice and vegetable medley, which consisted of Brussels sprouts, sweet potato and cauliflower.