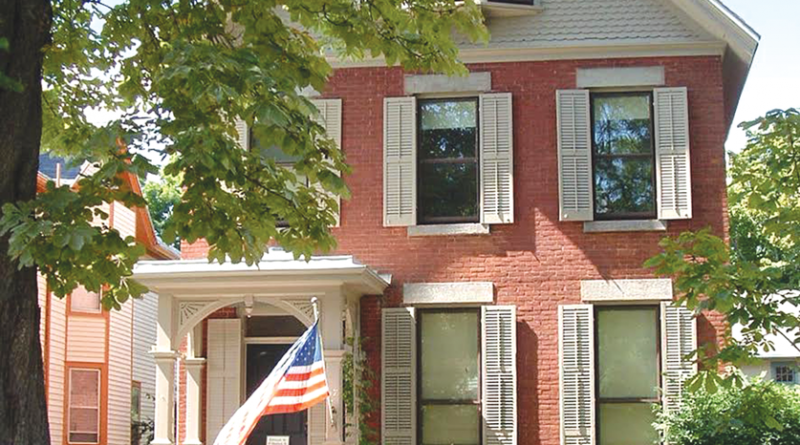 Rochester became an important hub in the Underground Railroad in the 1830s. The Genesee River’s access to Lake Ontario helped freedom seekers slip into Canada. The city was also home to Frederick Douglass, who moved to Rochester in the 1840s. His presence attracted and recruited other abolitionists. Douglass founded The North Star, an abolitionist newspaper, in the city. Douglass became a prominent “stationmaster” of the route to Canada, opening his home and office to house to refugees. A bronze statue of Douglass in Highland Park honors the gifted orator. Douglass’ grave is at Mt. Hope Cemetery, a few blocks from Highland Park.

Beyond its value as a pristine example of 1800s architecture, the Susan B. Anthony House (www.susanbanthonyhouse.org, 585-235-6124) at 17 Madison St., Rochester, commemorates a remarkable woman. The many causes for which she campaigned include abolition. The home’s guided tour highlights her friendship with Frederick Douglass, such as a photo of him on her mantle. The house’s website states that Anthony, who lived in the house for the last 40 years of her life, liked keeping photos of her closest friends nearby. Guides provide tours of the home Tuesdays through Sundays. The house hosts special events, too. Tour tickets are $5 for children, $10 for adults and $15 for seniors 62 and older.

Other Underground Railroad points of interest in the Rochester area include the Memorial African Methodist Episcopal Zion Church building. It provided another stop on the northward journey, as well as the home of William Clough Bloss and possibly other places. Little solid evidence remains of many other safe houses since railroad workers and those they helped sought to conceal their activities from detection to avoid punishment.

Several sites not currently open to the public were also used as part of the Underground Railroad in the Rochester area.

In the 1830s, Isaac Chase’s residence was built at 1191 Manitou Road in Parma. A secret room in the basement, hidden under a trapdoor, concealed house’s temporary guests. He transported them to Lake Ontario where waiting boats helped them finish their trip to Canada.

Thomas Warrant also used his home at 1956 W. Henrietta Road in Brighton to support the cause and help freedom seekers until they could complete their journey to Lake Ontario and, subsequently, to Canada.

In 1820, abolitionist Isaac Moore built what is now the Babcock House at 1496 Clover St. in Brighton. A secret room under the basement stairs, measuring 8 by 10 feet, is said to have been a safe haven.

Pittsford is home to the Hargous-Briggs House at 52 South Main St. In the 1820s, Judge Ashley Sampson lived in the house and helped conceal former slaves in a large, unused oven in the basement. A secret stairway between the home’s parlors helped move people in hiding between the basement and attic.

Considered the last stops on the Underground Railroad, Kelsey’s Landing on the Genesee River and the Latta Warehouse at Ontario Beach Park (also known as Charlotte Beach) in Greece are reportedly where many boarded vessels headed towards Lake Ontario, Canada, and freedom. Both are sites are used recreationally today.