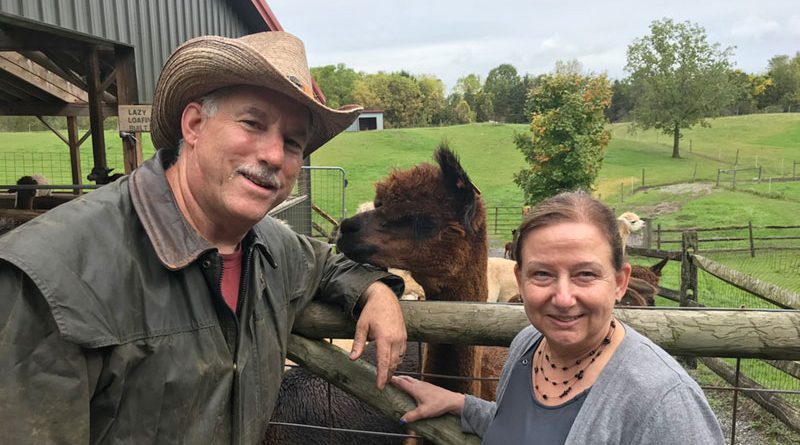 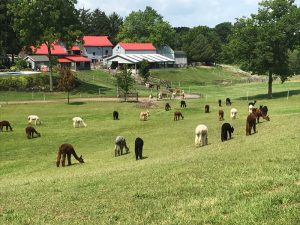 What do you do when you have a few acres sitting idle? If you’re Mark Gilbride, you start an alpaca farm.

Gilbride, 64, and his wife Sharon, 63, own 160 acres of land in West Bloomfield, a few miles from their home. He felt bad that they didn’t do anything with the land but brush hogging it occasionally.

“In a casual conversation, we said, ‘It’d be nice to have something to eat the grass down without me doing it,’” Gilbride recalled.

He began researching livestock and stumbled across alpacas.

“I came to the dinner table with all kinds of information about alpacas,” Gilbride said. “We had our five kids convinced from the first conversation.”

Sharon, a dairy farmer’s daughter, realized how difficult it can be to get away from home, as the herd requires milking twice daily. To learn more about alpaca care, the couple visited a few alpaca farms.

“When she saw a farm with 12 to 15 crias running around, she fell in love with them,” Gilbride said. “I convinced her we would be able to get away.”

Unlike the dairy herd of Sharon’s youth, the alpacas require much less care, just two hours of chores in the morning to get the animals fed and the barn cleaned up. Part-time help assists the Gilbrides in caring for their animals. Alpacas also weigh only 140 pounds full-grown, much smaller than dairy cows.

The 1980s represented the heyday of the alpaca industry; however, by the late 1990s, the trend was on the decline and by the early 2000s, when the Gilbrides bought animals relatively few people owned alpaca farms. That helped the Gilbrides purchase their animals at lower prices. They bought seven pregnant females from a farm in Weedsport, and launched Lazy Acre Alpacas.

The Gilbrides sold fiber — and still do — but knew that fiber would not support the farm. Then they hit on the idea of agritourism. By entertaining people at the farm, they could better support the farm.  Their farm tour includes their barn-turned-gift shop that they’ve stocked with alpaca fiber souvenirs, such as the felted animals Sharon makes.

Visitors seem to enjoy meeting the 65 adult alpacas and 12 crias. Each year, thousands of visitors come to the farm. Participation in the Canandaigua Chamber of Commerce and Finger Lakes Visitor’s Bureau has helped, as well as partnering with tour companies to bring more visitors to the farm.

“We entertain people from age 4 to 94,” Gilbride said.

Visitors can tour the 185-year-old barn, see its hand-hewn beams, pet the curious, fluffy alpacas and shop at the farm store.

In addition to the farm tour income, the Gilbrides also sell alpaca manure in the spring to local community-supported agriculture programs and to private individuals growing vegetable and flower gardens.

“They take it out by the truckload,” Gilbride said.

They also find creative ways to use scraps, such as making dryer balls from loose fibers that accumulate during annual shearing. In nine months, they sold $1,500 worth of dryer balls that replace chemical-laden fabric softener sheets.

“We can’t make them as fast as we can sell them,” Gilbride said.

They also operate seasonal “pop-up” stores in Pittsford and Canandaigua to sell alpaca items during the holidays and sell at area events.

The couple also lists rooms in their home on Airbnb, now that their children are grown and they have extra room. They hope to expand the gift shop in the barn by finishing the third story, as they’ve run out of display space on the lower floor.

He encourages anyone interested in agritourism to “come out and talk with me, spend a few hours. I’m very forthcoming with information.”

He added that anyone interested in the business should “really enjoy people.”

Photo: Mark Gilbride and his wife Sharon own Lazy Acre Alpacas in West Bloomfield. He was previously vice president of Splat Ball, Inc. in East Rochester.