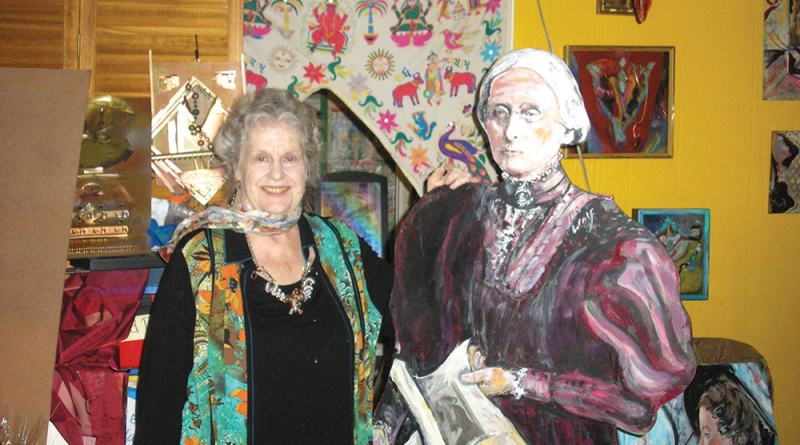 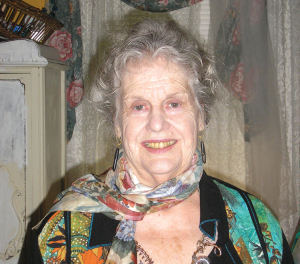 Mollie Wolf may never slow down.

“I work in a lot of different media, and I’ve even been busier since I retired,” says the 74-year-old artist and retired art teacher.

Wolf’s Rochester home reflects that energy in a cornucopia of color and shapes. Paintings, fabric works and other creations line the walls of her living room, perch on tables and chairs or sit on the floor. Even the ceiling bears her touch — a panel depicts a dramatic beach scene.

“I like to paint on the walls and stuff just for fun,” she said.

Wolf also gives local children and youth the benefits of her skills and experiences through teaching art courses for local nonprofits, including Young Audiences of Rochester, NY.

YA gives local kids the chance to experience and make art.

“She is pretty eclectic in nature,” says YA CEO Lydia Boddi-Rice. “She’s done everything, from using her textiles and love of textures, to the fine arts and painting, to jewelry making.”

Art lovers need not knock on Wolf’s door in order to view her creations — she has shown her works in galleries and other venues around the Rochester area and even given a one-woman show in New York City. You don’t even need to step out of your car to view some of her works — the artist has covered nine traffic control boxes around Rochester with four-sided murals. The large, gray boxes operate nearby traffic lights and street crossing signs.

Wolf painted her first control box mural about 14 years ago, when she decided to give a box at the intersection of Blossom and North Winton roads a makeover. A local group, the North Winton Village Association, had just planted flowers, bushes and other growing things on the ground around the device, and Wolf found the sight of the box amidst the attractive greenery unacceptable.

“Here was this big, ugly traffic box,” Wolf said. “I decided it would be good to camouflage it, and make it look like the bush behind it.”

Brush in hand, Wolf voluntarily set out to give the box the beauty of an outdoor planter.

“I painted most of the bottom brick,” she says. “Then, I put plants on the top of it — plants, and sometimes, birds.”

The North Winton Village Association then commissioned her to paint five more boxes in the area in like manner. Part of the fun for Wolf was being out on the street.

“One of the things I like about it is interacting with people who are walking by,” she says. “It’s sort of an extension of my teaching career, and it brings the art out of the gallery.”

Since then, Wolf has given control boxes in other parts of the city her special touch — including one in the Neighborhood of the Arts, one of the city’s cultural hubs. 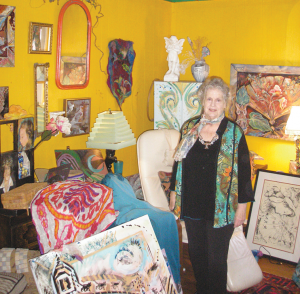 “The designs were created by students,” says Paulette Davis, who coordinated the project for YA and is a friend of Wolf’s. “She took those and made a cohesive design out of the various elements that students drew.”

Every day, huge numbers of drivers and pedestrians view the finished product, which presents images of the nearby Memorial Art Gallery, Centennial Sculpture Park and other culturally significant elements of the neighborhood. Wolf also painted two control boxes on West Main Street, in a part of the city that is home to the National Susan B. Anthony Museum & House. The one at the Canal Street intersection bears likenesses of the pioneer crusader for women’s suffrage and of Frederick Douglas.

Portraits of Anthony — one full-sized — grace Wolf’s home, along with those of the late poet Maya Angelou, Douglas and Rep. Louise Slaughter (D-Perinton).

“When I’m working on these, I sort of get into my admiration of these people,” she says.

The Slaughter portrait is one of two — Wolf gave the other to the congresswoman.

“She said she was going to hang it in her congressional office,” Wolf says.

Wolf has never limited herself to painting portraits and control boxes. Her murals enliven the walls of at least two local nonprofits, and other works are in private collections around the area.

She also creates pieces of art from felt and other fabrics, makes jewelry, and gives local kids the benefit of her skills as an artist and teacher.

“Mollie is a wonderfully sensitive and vivacious person,” Boddie-Rice says. “She has the ability to really cross generations and use her love of art and her love for people of all ages to really execute a project.”

Wolf began to develop an interest in the arts while growing up in San Antonio, Texas.

“My mother and my aunt were artists,” she explains. “My aunt painted murals all over the house.”

After marrying, she moved around with her former husband and family — he was a newscaster — before settling in Rochester in 1969. She has bachelor’s and master’s degrees in art education from Nazareth College.

Wolf is considering doing fabric design in the coming years, and wants to focus more upon creating jewelry. She makes her necklaces and other works of found objects — plumbing supplies, nuts and bolts, springs and the like — in a style called “steampunk.”

“It’s from the era of the steam engine and the industrial area, but it also has the punk element,” the grandmother of two explains. “Blue hair and nose rings.”